As far as liveries go, my intention is to provide one vaguely recognisable livery (assuming the right colour options are chosen) for each train, but I'm not interested in chasing the many different paint options that have been applied to each unit, especially the longer-lived BR ones. Similarly given the limited TTD palette, I've erred on the side of greater visual contrast rather than following liveries exactly, for example with the Class 444 you still get nice definition if your secondary company colour is grey or white which you wouldn't get if the roof was brighter.

I might consider adding some behind the scenes options so it's possible to fork the set and create a version with realistic liveries (currently there's no facility for alternative refits), although currently my priority is to get a usable 2cc set covering 1800-2020.
Top

Oh yes, and I have a new alpha version to try. This fixes most of the fixable clipping bugs:

There is one clipping bug which I think is also fixable, which is that long locomotives/carriages entering one of the four depot orientations will clip through the rear wall briefly. For some reason the curvature info returns something unexpected when the first part of a vehicle is hidden.

Clipping bugs which for now can't/won't be fixed:

I think these are rare enough and unobtrusive enough to live with, the diagonal-track bridge clipping happens even with vanilla vehicles and I hadn't noticed for years until I started going over sources of potential clipping problems.

This is the point you can start reporting clipping bugs (other than the 3 I mentioned), also any weird situations where a train splits in 3 or displays the front/rear cabs twice in slightly different places.
Top

Not worth another alpha release for something so small, but the last of the (known) depot clipping bugs is fixed:

Eddi also pointed out a couple of potential places where sprites could be drawn twice (or not at all) so I fixed those. It's worth pointing out the CETS project figured all these things about long vehicles, gradual turns and hill sprites out long before I got here, so that advice is welcome and useful.

I quite enjoyed your latest video of the Badger build. Would you be willing to create a basic tutorial about the exporting and rendering process? Not necessarily your fancy rotations and animated running gear tricks, but the basics like lighting, exporting PNGs at the right size and on the blue background, etc. I'd love to try Magicavoxel myself and I imagine I'm not the only one.
Improved Town Layouts | Improved Town Industries
Top

The export is handled using a tool I wrote called GoRender ( https://github.com/mattkimber/gorender ) - itself an evolution of an older .net tool of mine called Transrender, which ultimately owes a large debt to Zephyris' PixelTool. Given this is something unique to me rather than something more popular like MagicaVoxel, maybe there's value in me providing tutorials of how that works.

(And possibly create some binaries, currently the only thing I distribute is the source and you need to build it using Go, not ideal when the project doesn't use modules and has a slightly non-idiomatic directory structure)
Top

Timberwolf wrote: ↑02 Aug 2020 21:29 I might consider adding some behind the scenes options so it's possible to fork the set and create a version with realistic liveries (currently there's no facility for alternative refits)

If you don't mind, this is something I might look into myself, or help you with. I had a look at your work flow from the source code, and I am really intrigued by your work flow! I also looked at how you made the models, and would certainly be up to making some more liveries for your set!
Some links to stuff I've made:
-=RUKTS=- | -=NML Py-Patcher (a Python 3.0 pre-compiler)=- | -=Screenshots=- | -=Doom Soundtrack port to OpenTTD=- | -=Heightmaps collection=-

Still a little work to do but I'm close to where I want to be with the purchase menu sprites now: 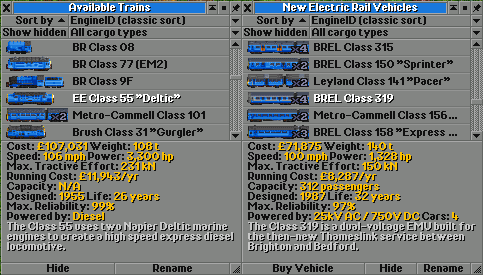 Hopefully will be able to get the last few misplaced tenders fixed and a new alpha out tomorrow evening.
Top

I've got a new Trains alpha:

This one is getting close to the point of the trains being "BaNaNaS-ready". Unless any unexpected bugs come in, it now only needs a README and I'm happy enough with the quality to put it up on the fruit store.

Tracks still does need a little more work, I'm not totally happy with either the alignments or the GUI sprites. I'll have to see whether the amount of effort required to fix either of those things makes me default to the path of "just get something out", but in the meantime a few days for everyone to test the public alpha is probably a good idea anyway.
Top

Well, I have to say Timberwolf, you've had me on an educational experience.

See, I thought I'd spotted an error in the text of the 4CIG since I've always known them as Corridor Intermediate Guard, but some googling and talking to chaps on twitter who used to drive them says that apparently both terms were used, and I have to admit I do love the poetic sense of Corridor brIGhton, since the LBSC telegraph code for Brighton was IG.
Otherwise, been enjoying this set quite a lot, been playing it on the Steeltown FIRS setting with your road set and it's been excellent. Hope that you'll be able to put some horn/whistle and running sounds in a future version to just add the icing to the cake.
Top

The Eurostar seems to be having some... difficulties.

Also not sure if this is a bug or just something not fixable, but all passenger carriages seem to do this when travelling diagonally. 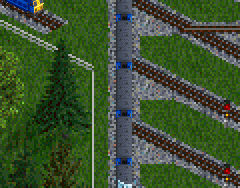 I just fixed the Eurostar bug - it was caused by the middle carriages not using the correct length template, which wasn't noticeable until they got split in 3 to fix the depot clipping problem.

With the carriages, all vehicles don't stretch quite as much as the default OpenTTD ones for vertical tracks. It's on my "one day" list but I never found it quite distracting enough in game to worry about

. Needs some playing around to figure out how to be a bit less "correct" and a bit more "Transport Tycoon".

Vertical views aside, I've now got to the point that I'm happy enough to put the updates on BaNaNaS - as far as I know the Eurostar was the last major regression and it's time I stopped putting pressure on forum bandwidth with alphas.

Good, can use it on the go now!

- Carriage alignments on N/S track are now much more faithful to the original OpenTTD vehicles.
- Dual-voltage locomotives (e.g. Class 92) now use the correct electric spark visual effect.
- Tracks have fewer grid border artifacts at 2x zoom.
- I've removed the NC clause from the licence for the compiled sets to make it clearer use in monetised videos is allowed.

On that last point, I'm happy to follow the Creative Commons guidance in that I don't consider use of the unmodified set in a video or screenshot to be an adaptation, you're not required to put your videos/screenshots under a CC licence or attribute me in them. A mention of the set name and where to find it is nice for people who aren't so used to searching BaNaNaS for what's new, but not mandatory

A very minor update on BaNaNaS (v1.0.3), adding in the first of the modern units to represent all the weird and wonderful things that have been introduced to UK railways in recent years.

TFW you can't decide if you want a FLIRT or a GTW so you get a bit of both instead. Good work.
For the safety of our railways: Fire Sir Topham Hatt now!
Top

I think that's an OpenTTD setting? (Maximum train length in tiles or something similar). The default is quite low, so with the longer vehicles it's easy to run into it. If you increase it, there's nothing in the set preventing you from adding as many Mk3/MK4 carriages as you've got space for.

(Interestingly OpenTTD doesn't apply it for multiple units if you build just one of them, probably sensible as it'd break the set otherwise. Meaning you can have much longer APT-Ps and Eurostars than all your other consists with the default settings)
Top

I'm continuing to work on adding more of the modern multiple units (2000-present), I'd like to get the set complete up to the present day before I start going back into Victorian times... and once I do that I can work out where to use my 55 sound effect slots to greatest effect

Current progress on the new units: 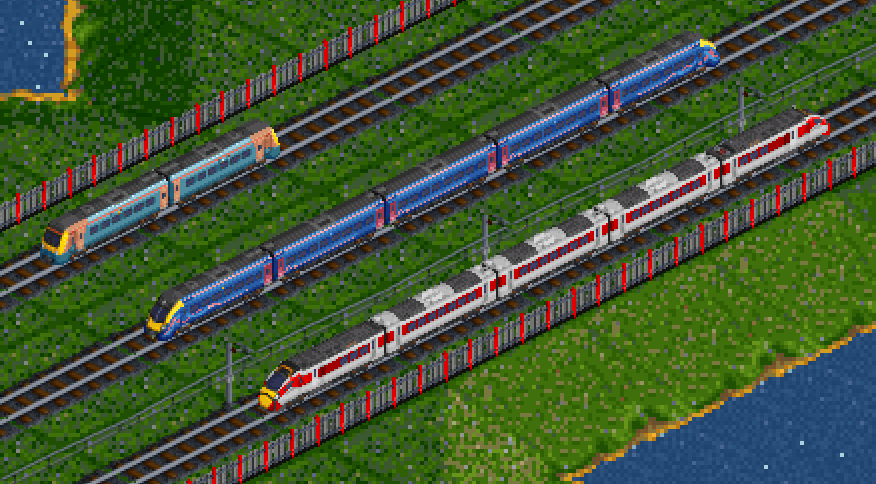 Also found a small bug, the FLIRT is a little too keen to fire up its diesel engine, that should be fixed in the next version.
Top