Oops... I failed to notice that chemicals could also be a piece good cargo. 1.2.7 uploaded which fixes this problem, improves the crate sprites generally and also has some roof detail improvements to the Class 37.
Top

hey there I am very impressed with your uk rail set, its definitely the best in my eyes. I was wondering if you plan to add more 25kv ac multiple units like the class 309 or 357?
Top

Timberwolf wrote: ↑05 Jan 2021 20:37 Oops... I failed to notice that chemicals could also be a piece good cargo. 1.2.7 uploaded which fixes this problem, improves the crate sprites generally and also has some roof detail improvements to the Class 37.

Sorry, me again. Same problem as with Chemicals but with Fruit (unless you already fixed it - I think I still have the previous version running).
Top

Nope, I only updated chemicals - same problem, there are sprites for it as a bulk cargo but no information giving it a recolourable crate for the "piece goods on a bolster" case.
Top

I added some new features to GoRender this weekend, with the aim of improving how small details are handled. So there's a new update 1.3.0, which doesn't add anything major but features subtle improvements to almost every sprite in the set. Example of the updates below: 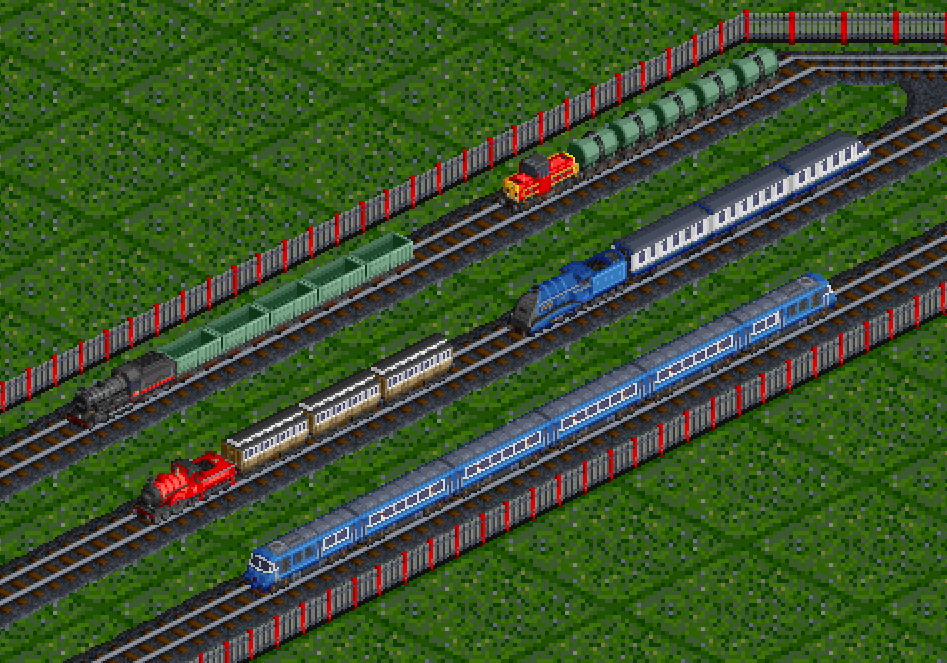 This also fixes a bug I noticed a little while ago where bulk cargo in long vehicles would always appear as coal in the front and rear sections, due to a missing recolour specification.

Incidentally, the main driver for the GoRender updates was improving the quality of the 1x zoom sprites, which have always been a little on the "indistinct mess of pixels" side when the objects are optimised toward appearing chunky and detailed at 2x. I think I'm going to declare "moderate success" there: 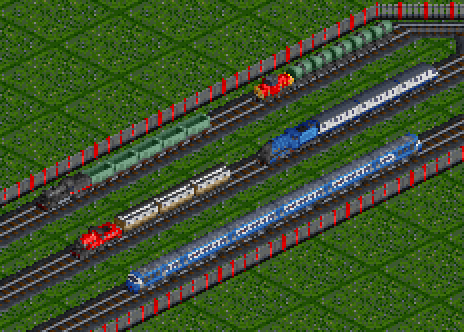 (As ever, there are improvements to be made but I'm getting closer to my goal of GoRender output looking more like pixel art than rendered 3D models, voxel or otherwise)
Top

I'd also dispute it's award of the 10% long distance travel bonus but that's only because I once had to commute on the damn things and lordy they're uncomfortable, but that might be a matter of opinion.
Top

Fixed... the dual voltage at least. I couldn't find good figures for what the power on third rail is (it's usually less for these high powered dual voltage units) so put in something that seemed about right.

The comfort stays the same, my reference point was warped by too much time on the 3x2 format Desiros which assume anybody who gets on them doesn't have arms.

There are also some further sprite rendering improvements, a little more detail in places and slightly fewer pixels out of place.
Top

A little update just released... while recording a batch of YouTube videos for the next few weeks I've noticed there's a good 20 year stretch where the NER 1001 class is the only sensible freight choice; the extra power and tractive effort push it far beyond the Coppernob even on speed-restricted routes. I didn't want to nerf it as I like the way it makes the 1850s this pivotal point where horse-drawn trains go from being competitive in a lot of situations to hopelessly outclassed.

Instead, the problem is I was missing the subsequent two decades of steam development, meaning rather than iterative improvements and alternatives you end up with the 1001 class being top of the tree until the early 1870s brings two tank engines that almost equal it in usefulness, before the Drummond Class C comes along mid-decade and obliterates it stats-wise.

The solution is to introduce another couple of intermediate steps: 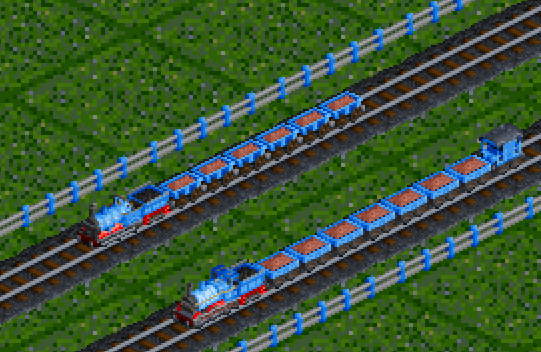 The LNWR DX Goods arrives a few years after the 1001 class, and does almost the same job for a much smaller cost, which may be appealing in an era where few wagons exceed 40mph. Bridging the gap between that and the Class C is the Midland 700 Class, which moves things on just enough from the 1001 class that you might consider upgrading, and makes moving on from there to the Class C a careful consideration of cost vs. benefit rather than an instant decision for any line which is too big for either of the tank locomotives you have at this point.

I also revisited one of those early "realism vs. fun" decisions and edged it in the gameplay direction; "Lion" felt a bit pointless because while it ought to be a useful stat upgrade across the board from the Patentee, the game mechanics mean it's hopelessly hobbled by its low tractive effort. So I've thrown away that carefully-researched figure to give it a buff - although not so much of one that you won't still be making "to horse or not to horse?" decisions well into the 1840s. The Patentee also gets a subtle boost to help keep that early game mixed.

Re DVT - in principle makes sense, I need some time to test it and make sure it works, so didn't make this release.
Top

Thank you! I have been hacking them on by electrifying the depots only.

First just want to say excellent set you strike a great balance between realism and playability, the added post NER 1001 freight locomotives makes me want to start a new early game I always enjoy that move from horses to steam as can easily mess you route up if you get it wrong.

Firstly, thank-you for this fun set! Loving the range of stock and locos!

Though, tinkering around yesterday, I did have a few ideas for stock that would either add flavour or fill gaps-
* Non-Corridor Coach from Grouping Days, for locomotive-hauled suburban services. Higher capacity, but with the penalty for longer trips?
* Mk1 Suburban Coach, same as above to go with the Class 26 and other light locos.
* Class 117 DMU, similar high-capacity, short distance DMU as an alternative to the 101?
* Steam Auto-Coach? Unless I'm missing it somehow?

"Their is much pleasure to be gained from useless infomation"
Top

Hi, this is great set, but (there had to be "but") I have just noticed that the "wool" cargo does not show on "bolster wagons". They seem to work just no cargo sprite.
Top

Thanks for the great set , are we going to see Narrow gauge ?
Top

Bit of an update... firstly in the main set, DVTs are now buildable in normal depots and WOOL should now show up correctly. I want to keep the introduction dates roughly prototypical, give or take the usual randomisation of OpenTTD, so they'll stay at 1989 and anything earlier will require someone to point me in the direction of an interesting BR prototype

I also realised that while I didn't want to go too crazy with an endless procession of similar freight 0-6-0s, you do end up at a point in the 1900s where the GWR pannier tank is superior in tractive effort and power to everything that's been introduced up until then... so I've added in one of the GER's turn of the century designs to make sure tender locomotives stay competitive when you need more speed than the Robinson 8K can provide.

Now, I use the phrase "main set" deliberately because there's something that's been on my mind for a while. Timberwolf's Trains is "complete" as far as the roster is concerned; it meets the goal of being able to play from 1820-2020 with the feeling something new is always around the corner, be it the race for faster and faster express services of the 1920s or the plethora of weird and wonderful multiple units from the modern era. More importantly it takes an absolute age to compile and upload changes, which is a common driver for development plateauing.

What tends to be left is...

1. Stuff I want to introduce, which is mostly weird and bizarre dead-ends that make little gameplay sense and have no prototypical justification to be in the set.
2. Stuff I get requests to introduce, which is usually a duplicate (or near duplicate) of something that already exists gameplay-wise, but represent's someone's local or favourite regional railway.

WIth this in mind, I've created a new set - the Community Addon. This will bolt on to Trains and let me introduce some of the weirder and more wonderful stuff, worry a bit less about gameplay duplicates bumping up my filesize and also add something that can shake up gameplay beyond what the existing set does. (Most likely... yes... narrow gauge, although I want to figure out some gameplay gimmick beyond merely "slower and cheaper" that works well with the rest of the set. Given the number of original locomotives still running NG railways, it might be some alteration to the "old vehicles become unsustainably expensive" mechanic, although I haven't yet pored over the NML documentation in search of a new unexpected thing to punish or reward players with)

It's not very big at the moment, but you have to start somewhere

. Plus it'd be good to find out any interoperability bugs or weirdness before the set becomes big and fixing elementary bugs takes too much time in compilation. 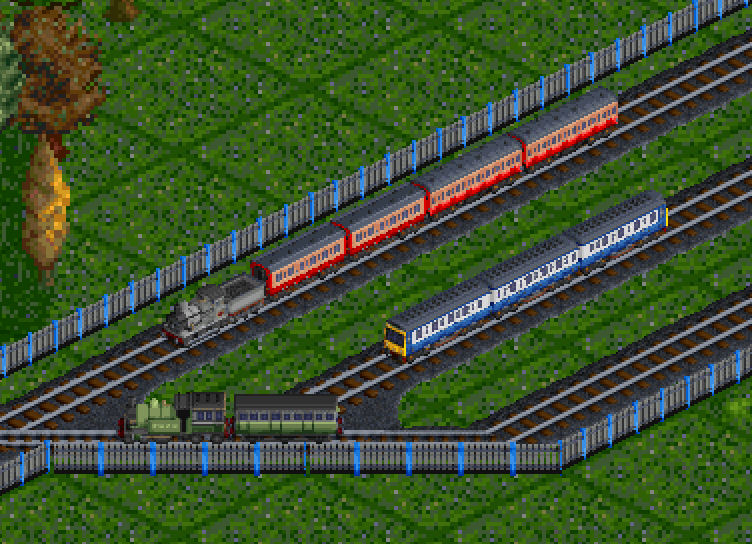 Back to school for me, I didn't realise that 'MK3' only arrived that late in real life.

I think I've worked out what I want to do with narrow gauge, assuming the relevant callbacks update with a suitable frequency. NG operations will be slow, not very powerful, low capacity and only marginally profitable, much like extending the 1800-1850 game indefinitely. However NG locos will be extremely long lived. You may never need to replace one unless you're playing some sort of multi-century legacy game.

What am I planning with this? Well, if you buy a brand new passenger NG service, it's going to be awful. Passengers won't want to ride more than a few tiles before refusing to pay more than a pittance for such an awful and uncomfortable method of transportation. But once a locomotive is old... aha! Now it becomes a preserved railway, and passengers will pay happily to sit on hard wooden benches in a cramped carriage for the experience. If I can make it work (a big "if") then I think that becomes a nice gameplay mechanic for people who enjoy micromanaging this sort of thing, and keeping around their old locomotives to build museum lines. The bonus becomes larger the older the locomotive is, and while it's going to be a lot of fiddly micromanagement to set up a preserved line with 100 year old locomotives it'll be worth the effort.