I wanted to change 1 sprite and fix a bug that was reported. Did a little bit more than that.

It's finally done! Station buildings in the scale of the houses set.

So the houses set came out before the station set. The original planning was for it to be the other way around, but I really liked adding snow to it, which gave me the push I needed to finish the house set. Snow awareness for the platforms is still not ready, and will take some more time, as it's quite big. This is the last DPRK Stations NewGRF I have planned. I'm not touching industry again. I don't play with it enough to care.

I am using your DPRK Stations Set on JGR Community server and they look great. I would like to ask you that do you consider to improve buffer stops as currently "platforms with buffer stop" act like trackless station tile rahter than being a half-trackless station tile. As you can see 5 tile train doesn't enter to the last tile of station of 6 tiles. 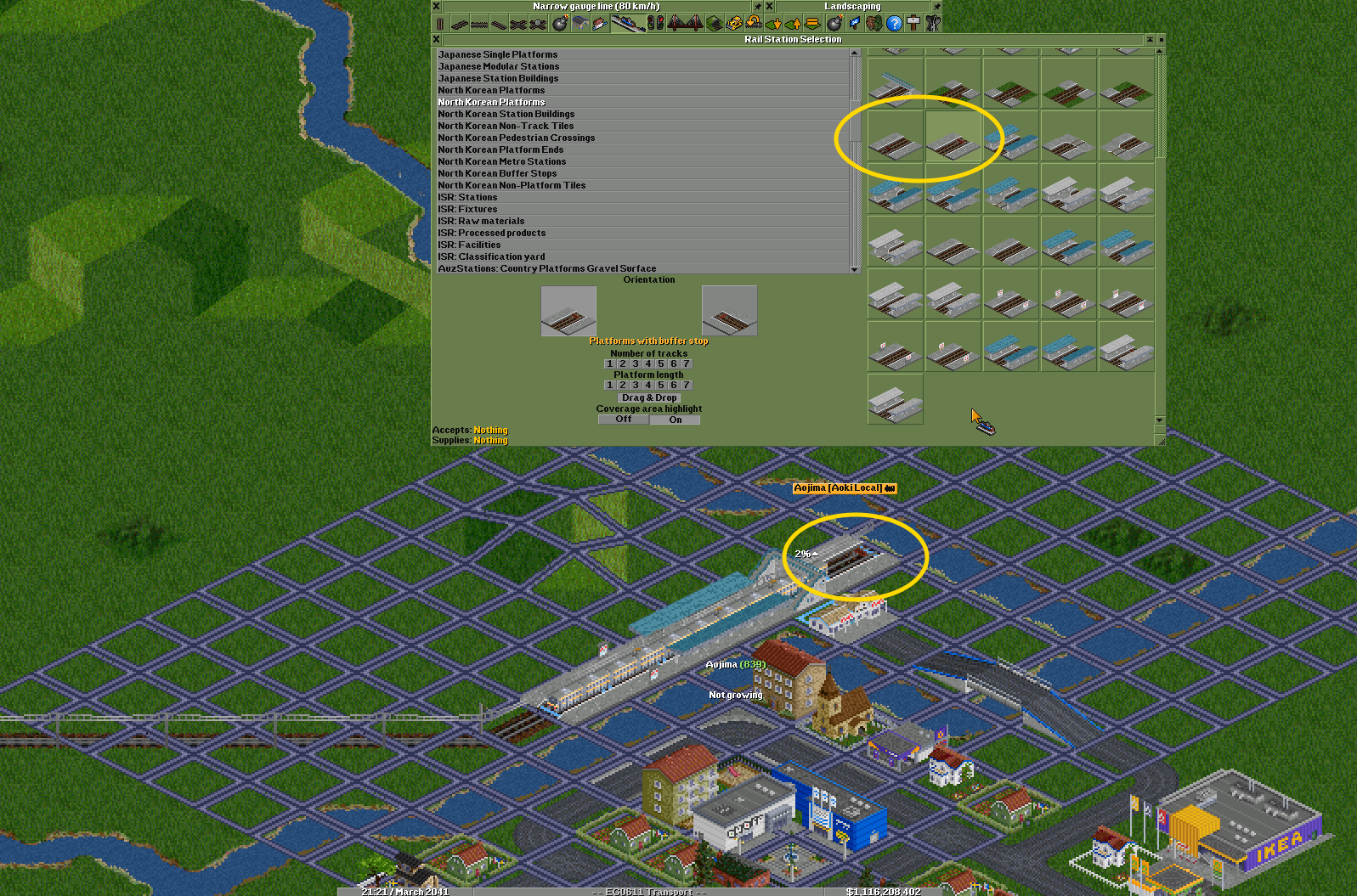 Also there is no station tile with 3 sided platform with buffer stop. Would you consider to add it as well? 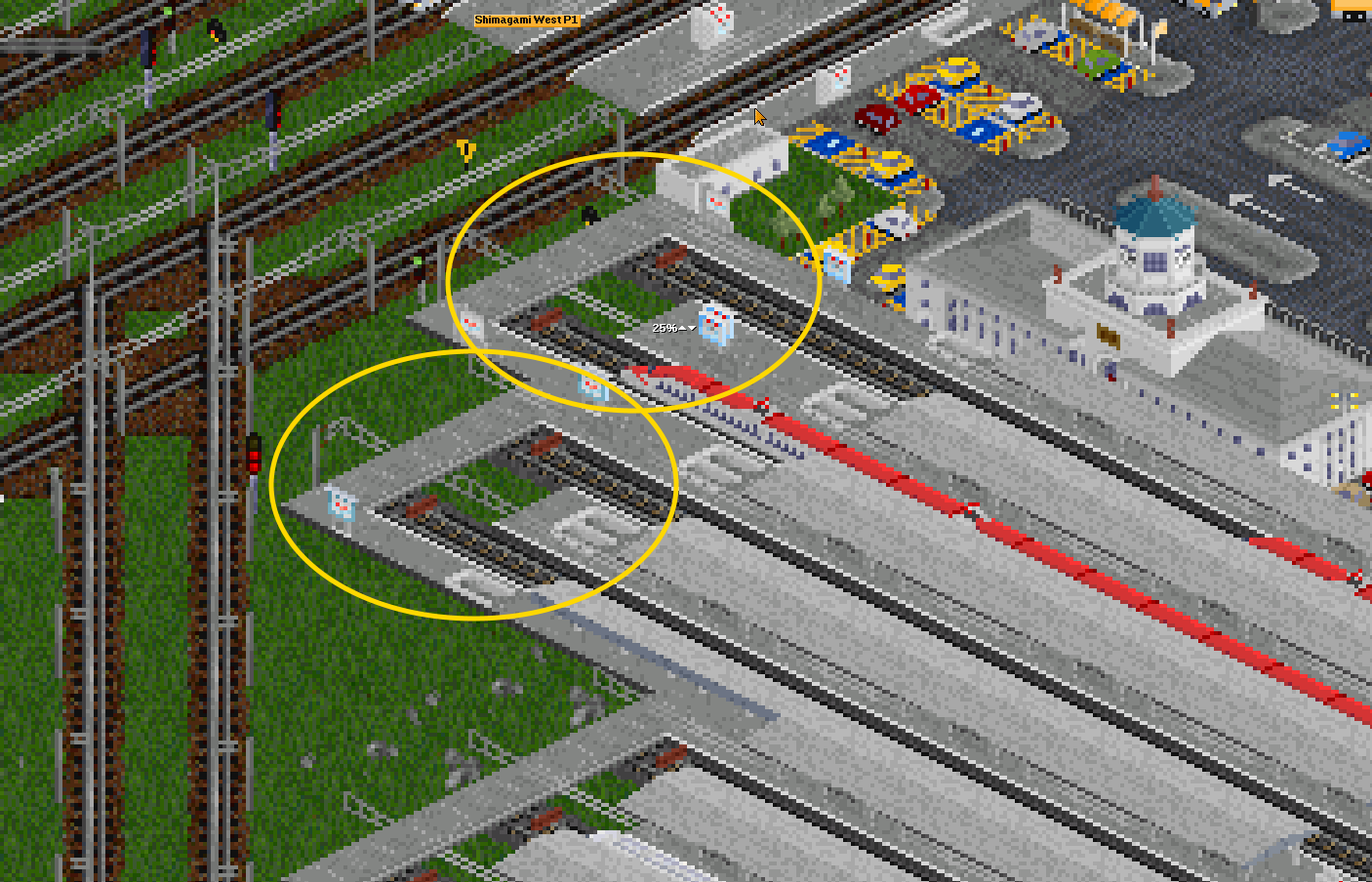 @EG0611
Station tiles with buffer stops are (have to be) always non-track tiles. Else trains would move into/through the buffers.

It would be possible to make buffer tiles 'trackable', but in this case the player would have to restrict all the trains to not move to the ends of platforms with buffer stops.

As far as I know many station sets have half-trackless station tiles as buffer stops.
Top

I am using your DPRK Stations Set on JGR Community server and they look great. I would like to ask you that do you consider to improve buffer stops as currently "platforms with buffer stop" act like trackless station tile rahter than being a half-trackless station tile. As you can see 5 tile train doesn't enter to the last tile of station of 6 tiles.

Also there is no station tile with 3 sided platform with buffer stop. Would you consider to add it as well?

Like Blunck said, I'm not gonna make it so you can drive (partially) through them. That's because it's impossible to do.

As for your second point, I discontinued 2-sided platforms when I released the DPRK Station Set v2. They're never coming back. They're the most unrealistic thing that only exists because that's what was normal back in the TTO days. I was a fool for even adding them to the original North Korean station set. The reason why you still have them in your game at all is because you're using a discontinued version of the North Korean station set.
No pics no clicks. Seriously.

As far as I know many station sets have half-trackless station tiles as buffer stops.

There's a difference between a non-track station tile and its graphical representation.
I.e., you may paint a full-length or a half track or no track at all on such a tile. 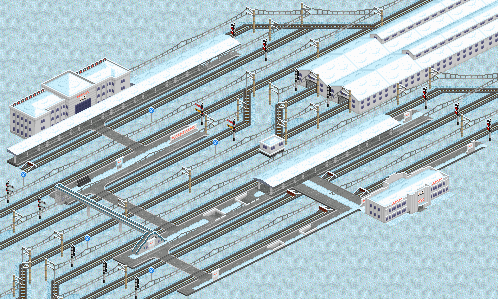 The source code for those who are interested. The forums only allows up to 3 files per post, so this had to be a separate post.
I've moved from CC BY-NC to CC BY after hearing concerns about streaming and YouTube regarding non-commercial licenses. For my NewGRFs, licenses indicated on BaNaNaS are leading.

Erato wrote: ↑09 Jan 2021 13:55The industry set is probably not going to come back any time soon. I personally don't play with freight, and making an industry set is quite a large time investment. Sorry about that.

Words are part of a balanced diet.

I decided to make the Industry set v2 anyway because I was playing a singleplayer game that I want to keep playing on for a long time, and industries just make for really good eyecandy. And since there's nothing better than eyecandy, I just gotta.
OTIS didn't exist when I started this, and even if it did, I'd need to make the eyecandy objects for it anyway, so I might as well. For the industry object set I'll make sure to add overlapping tiles for OTIS.

I now have at least one layout for every industry in my first chain, so I thought this was a nice time to announce that industry's back on the menu. 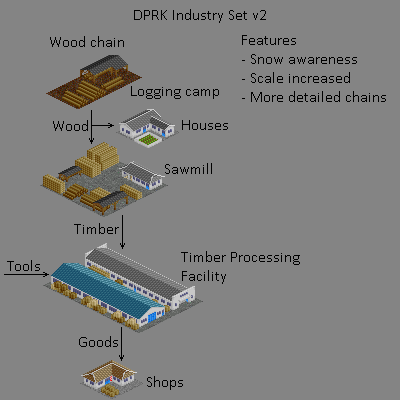 I'll make other chains and industries as and when I feel like it, so it might take a while before you'll see a first version.
Feel free to tell me what you think.
No pics no clicks. Seriously.

Very nice!
And thank you for planning to also make it available as objects!

Not gonna lie, this made me very happy!

Found a new diesel locomotive on Twitter, and TELK decided to translate the DPRK sets, so translations will be rolled out as time goes on.
DPRK Trains 1.14 - 07/04/2021

Separate post due to forum constraints, but the townnames have also received a korean translation.
DPRK Townnames 1.1 - 07/04/2021

A third entry came in for the GRF competition, the deadline is coming up soon, and I'm done with exams, so I decided to try and get a NewGRF made for the competition. I'll make some Pyongyang landmarks for it. Here's two I've already finished. The Arch of Reunification and the Juche Tower. I'm thinking of a mix between communist monuments, traditional Korean architecture and modern Korean architecture. 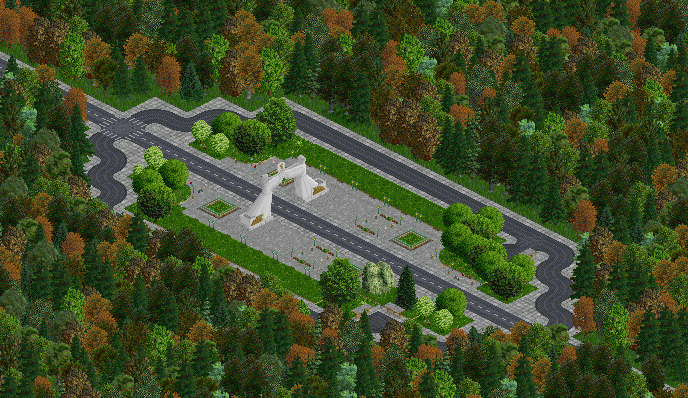 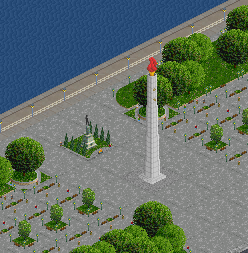 Where is the parade of the gorgeous North Korean army girls? No vote without them!

I love your work!

I found something weird though: when loading the North Korean Trams Set, it seems to influence the buying and running cost of train vehicles.
No change in parameters, cost modifiers are the default (1x)

without the Trams Set: 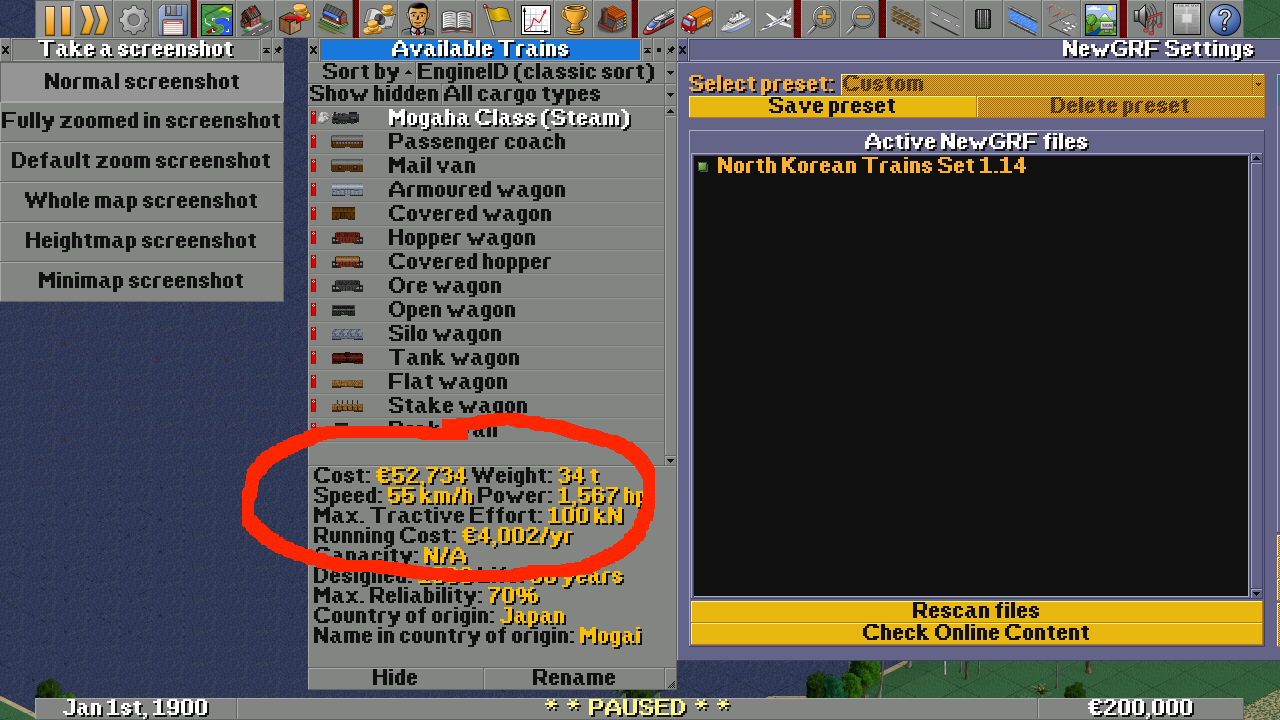 with the Trams Set: 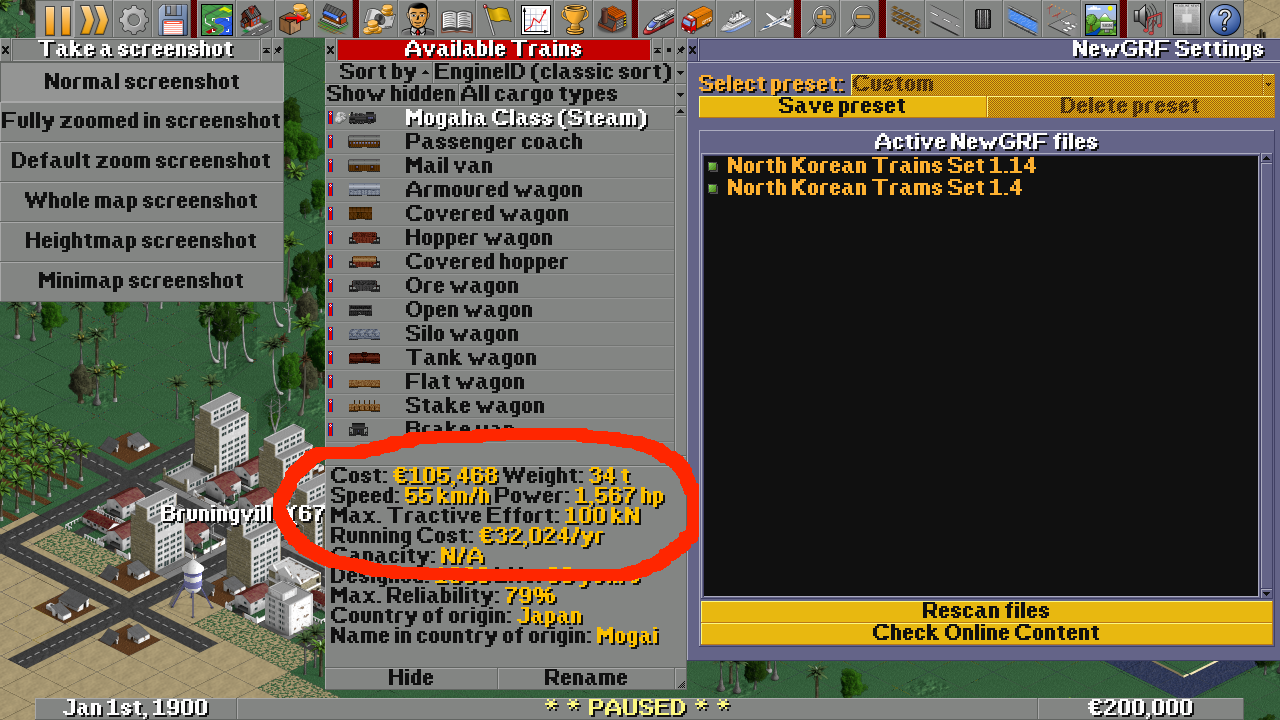