Would it be possible to build conveyor belts on slopes next to the ore crane? See picture below.

Found why that wasn't happening as I had the 2 images of the belt in the wrong places in sprite.

If the image can explain it.

The top 2 are how I had them in the sprite.

When they should have been the other way around like the bottm too.

With Railway stations and platforms .. the one on left should always be facing a SW to NE direction and the other NW to SE.

Found a few others I have wrong as well.

If you open the Rail Station Selection and click on the top Coal Loader sidings End, Normal.

You can see the left side track travels South West - North East Direction and the right side one North West to South East.

Well all the other pieces in that menu should all be facing the same. But I notice there are several that are wrong.

Pieces facing South-West to North East will only go on slopes the same and will not go on a slope the other direction.

I'll put my Car parks on hold for a day and see if I can fix these errors in the Mining Industry.

Until you told me about the problem, I would not have realised of my mistakes .. much appreciated as you help me learn something new.

I fixed the problem with the conveyor belt that goes with the cranes.

Before the conveyor belt would not build on the slope, especially near water to load ships .. but that been fixed. 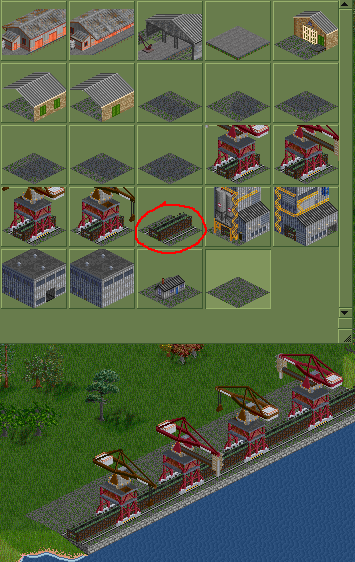 Finding that problem also found a few others in the Mining Industry that was also wrong way around.

Normal use they would not have caused a problem, but when building along edges of slopes that where problems could happen.

The Coal Conveyor Belts that have overlaps.

These also look to be wrong way, but they are not .. the overlaps was designed for parallel platform and station pieces .. not the way I have used them.

All overlaps I have made overlap to the back. I did not make any to the front as front overlap pieces will cause glitches with any thing built under the overlap piece.

If place a front overlap over a road .. the road will be ok, but a vehicle will drive over top of the overlap piece. So I don't intend to make front overlaps.

If you have a game in operation and using the AuzFreightStations_v008 .. this update might flip some of your conveyor belts to face the other direction. So might have to rebuild those pieces.

Any way .. here the repaired AuzFreightStations_v008.

Thank You very much! Ill see what I come up with it in game

When I had sent them to You some time back then there were animation stages. Would be cool to have them animated but no a big deal. Cool to see some of my staff in action
What I was imagining looooooong time ago! Loding on to ships (Cranes) and on trains (tower with dust spray tanks) 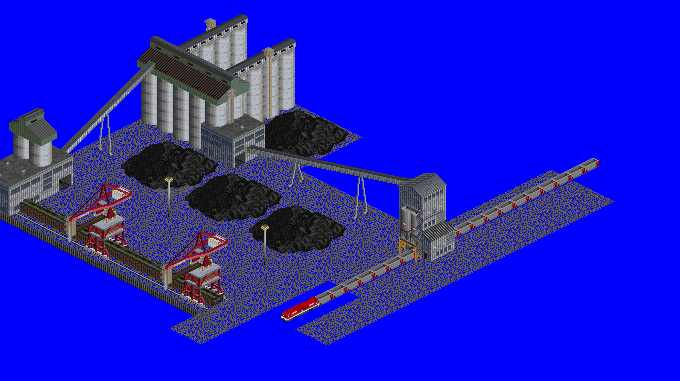 ISA wrote:Thank You very much! Ill see what I come up with it in game

Your welcome .. fixing that error taught me something new in how to set out the graphics.


ISA wrote:When I had sent them to You some time back then there were animation stages. Would be cool to have them animated but no a big deal. Cool to see some of my staff in action

I got no idea how to code continuous animation. Only know how to make them change position when a train arrives known as Path Aware.

I hoping I can learn some animation with objects soon .. the Car Parks I working on at moment I have access to the coding to Pyoro Car Parks which is animated.

Hoping I can learn from that how to animate other objects.

Animation for Station pieces .. I only know the path aware and Cargo Aware animations for those. Just might be able to use to those to make animation

ISA wrote:What I was imagining looooooong time ago! Loding on to ships (Cranes) and on trains (tower with dust spray tanks)

Time flies when your having fun. I will get the other pieces finished .. Some are odd size and not fit in the sprites I been using. At the time I didn't know how to code sprites of other sizes so put in the too hard basket. The sprites I been using are sizs others used in their projects and allowed me to use them and the codes.

Over the past few months I worked out how to code over size sprites so with luck can get the finished.

But before I do I like to do more to the car Parks I been working on this week and hope I can learn the animation in those to put to use with other object sets while it still fresh in my mind.

That is my biggest problem with all my projects I have trouble concentrating on same thing and usually after a few days working on it I have to give up for a while and do something different.

Unfortunately a while can be several days, weeks and some time months before I can go back to it.

In the mean time, some ideas for your stuff?

Overlap a part of the conveyor belt that are sloped so a road can pass under the higher parts?

The coal piles can be made Cargo Aware so that coal and ore will create a pile there until a ship collects it.

Quast65 recently shown me how to do some animation with stations, so I might be able to make the conveyor belts look like they moving.

Not much coding gets done on weekends due to house works and lawns need mowing.

Yeah Ill understand. I know what You feel about different projects, I have been there myself. Instead of finishing one thing Ill pile up more than one project and then they are all half done

Probably I too after today will not be able to play some time as Im heading to work another place. That will take a lot of my time.

So as mentioned above earlier. I try to overlap ISR road and then come down to lower level with conveyor belt. Discovered that I would miss one of the views to achieve my goal. There's 2 views instead of 4. 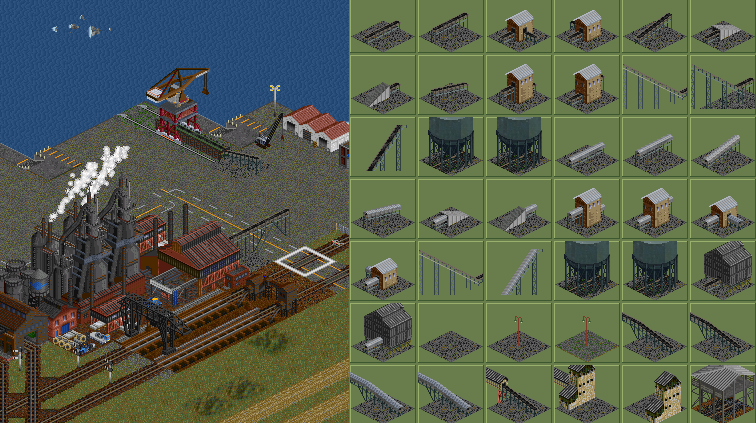 By you all doing this it helps me to see things that I missed or could add.

The really high level conveyor belts originally designed to join the Mine Shaft Building Extensions .. hence the slope for them only have 2 built.

Never thought that players would use them different.

Having problems understanding the coding and getting ideas for the car parks so I'll put that on hold for a while and see if I can work on the conveyor belts and see what I can improve on.

I got 3 different levels of conveyor belts so see if can get them all to join so can be used any where. Might be interesting if there was Junctions where they cross over each other.

Appreciate you bring up some of these ideas.

I made up the NW and NE end pieces for the slope Conveyor belts that go from ground level to the highest belts that go both ends now.

Got some other ideas but ran out of space in AuzFreightStations_v008 so future add-ons will have to go in another set. Most likely be the AuzMoreFreightStationsV1 set.

Had a look at making the conveyor belts animated to look like they moving.

Same as those in the ISR/DWE Object sets. They have Yellow Conveyor Belts that look like they moving and conveying Iron Ore.

Any one have a idea how to make the coal look like it moving please let me know.

I see my conveyor belts are slightly out of alignment to join the ISR/DWE sets .. like to see if I can adjust mine those few pixels so can join up with them.

Maybe my ground level ones could also be same yellow colour as the ISR/DWE as well. Would you agree with that idea?

The big problem making the conveyor Belts animated is I need to make extra sets of every thing and the AuzFreightStations_v008 is full.

Way to clean and bright. Main reason I havent use them much.

Bad that I cant get back to computer near future. If you have some small idea I would glady help... Just dont want to bite too large peace

ISA wrote:Please dont make them yellow. Way to clean and bright. Main reason I havent use them much.

No problem .. I not change the colours.

It will be some time before I start working on these as busy with the car Parks, railway tracks and bridges .. the last 2 I was hoping to have them finished by now, but ran into problems. Hope get back to them in next week.

Okay cool. I know the feeling how early work and new ideas pile up while tring to live real life.

ISA wrote:Okay cool. I know the feeling how early work and new ideas pile up while tring to live real life.

They sure do pile up .. when doing something and get a new idea, so just have to try the new idea before we forget, so what we working on before that idea gets delayed

I will keep working on the Car Parks for a awhile as learning to make animation for objects .. the source that Pyoro did for his Parking Lot is excellent to learn from.


I Will see how do I cope in my new job and how much time I have once i have lived in enough. I very much like animating different tiles. For example If You have some tiles what are ready but not animated I am open to try and fix it for You.

Hope you enjoy your new job and after work get time to relax and enjoy playing around with the game.

Something you and others could do who use my objects sets .. let me know what you think might look nice animated.

Just in case you didn't know that falling from a platform at a railway station can be a hazard. 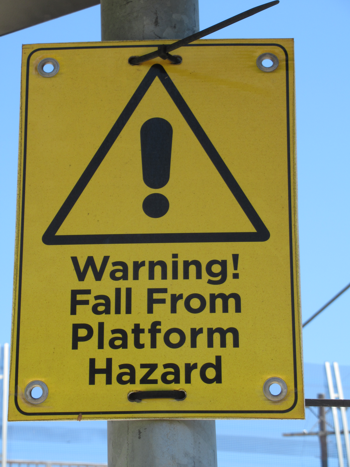 Signs are very important on platforms

. But unfortunately people do not always pay attention to them... And this in turn leads to accidents...

What else do you plan to add to this set

GarryG wrote:Funny where that sign is located .. it right down one end of the platform so passengers who join and alight from the last door of the last carriage only ones who see it .. and the guard. 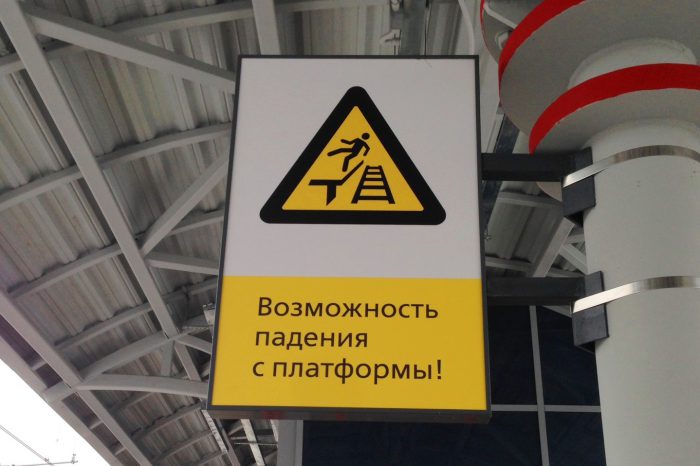 Players getting confused (me too) of where I am up to with my projects.

So I'll add my latest ones here.

If you use any of these and what in above 2 posts, they replace all other versions, especially those on Bananas.

maybe I should put these on Bananas as well as it be a while before I get back to working on them again.

How do you check this.

Click on any one of my files I have uploaded in the past.

Look in the CONTENT INFO window to the right.

If the file is out of date and has been replaced by a newer version that can be found in Bananas it will have the wording in Description:

I just uploaded the Station sets to Bananas.

All the others are new files. The ones they replace will have *** THIS GRF IS OBSOLETE *** showing in the Contents menu.