Quast65 wrote:@ISA Is the update working for you too?

Seems like it! That was a fast test. Ill play some more bit later and if something pops up Ill let You know. Thanks all!

Had a idea for a Waypoint.

Fettlers Working on the lines .. unfortunately they pull down the fences where they work, but that might be to allow easy access to the work site.

Fettlers on the tracks doing maintenance work.
On the single line there is no signals protecting the worksite, just the flagman with a red flag.

On the double line it has a path signal as well as the Flagman with the red flag to help protect the work site. 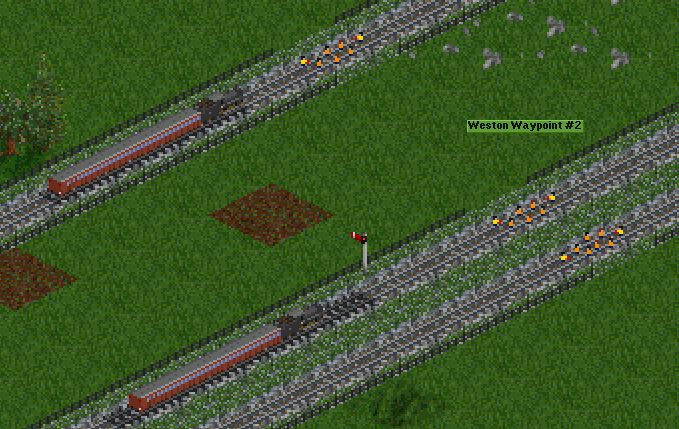 As the train get closer.

On the single track the driver does not slow down and the fettler gang only just get off the line in time .. at least I hope they all did.

On the double track with the path signal the flagman had warning to get the fettles off the tracks and when they was clear the held out a green flag. 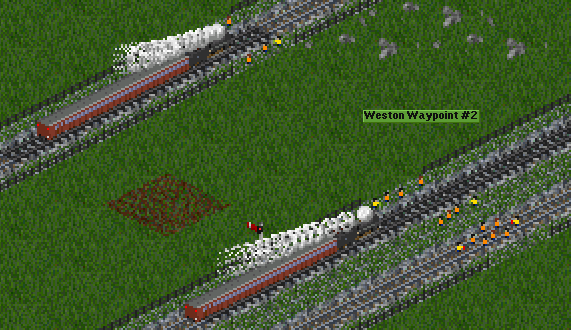 Your imagination never ceases to amaze me!

Brilliant Garry! It's amazing how the human brain can see 10 coloured squares and recognise it as a person. It's a testament to your art skills. Love the guy with the flag.

Just out of curiosity, where does the term "Fettlers" come from? I've never heard it before.
Top

Diesel Power wrote:Brilliant Garry! It's amazing how the human brain can see 10 coloured squares and recognise it as a person. It's a testament to your art skills. Love the guy with the flag.

I can't take credit to those as got idea from other newgrf sets such as animated platforms.


Just out of curiosity, where does the term "Fettlers" come from?

It what I always know the crews who repaired railway lines was called. The British called there workers the same.

I hope to improve the Fettlers Waypoint by adding a camp fire so they can boil the billy.

I've added the flames but they frozen in time at the moment. Going to see if can animate them. 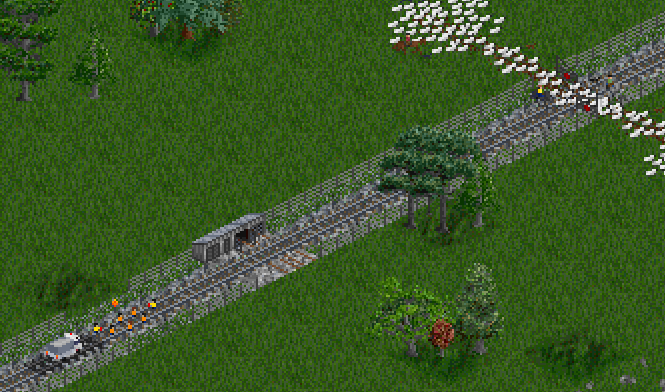 How about having the Teeside Fettlers singing around the campfire ?https://youtu.be/mRoXEDFBndg
Top

I was thinking of doing my own signing for it, but red flag or not, the trains will definitely not stop .. they would sound their whistle to drown the noise I wake.

any way much thanks to Quast65 we got the camp fire burning good and soon be ready to cook some kangaroo steak and emu eggs and boil the billy for a cuppa. 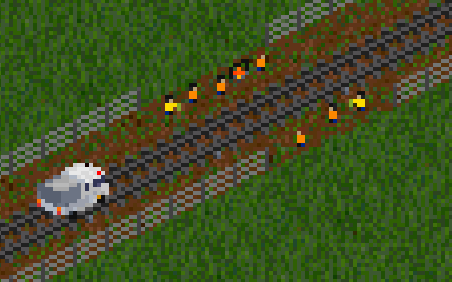 Ya want to try?

Received a suggestion with the Depot Extensions I been making.

At moment these are found in AuzMoreFreightStations .. but been asked if I could put these in a file on there own.

Although they act same as a station, these are designed to make the Train depots larger so look better with long trains.

I really like the new waypoints. They look beautiful and realistic. Generally cool

. I updated this set a few minutes ago.
I agree with this idea. It looks quite logical and true

STD wrote:I really like the new waypoints. They look beautiful and realistic. Generally cool . I updated this set a few minutes ago.I agree with this idea. It looks quite logical and true .

When I first started doing the stations and add-ons to it .. guess you can say I was in Kindergarten and learning.

Now that I up a few grades and my drawing skills and ideas have improved, serious thinking to give all the Stations sets a facelift.

Been visiting many railway stations this year getting photos and ideas.

Just a few more stations I hope to visit before the years over and than I hope to start on the new ideas.

I will make a new set just for Train Depots.

I hope to call it "AuzTrainDepotExtensions".

Finally separated all the graphics for the station sets.

Can now provide sources and graphics for all the work I done to date.

There are no Readme, changelog or licence documents with these as have not updated these yet.

These are all free to use however you wish. You can even make your own sets if like.

The AuzMoreFreightStations has had all the items related to depots and infrastructure transferred to the AuzTrainDepotExtensions.

In case you don't wont source to those 2 and just want the game files here they are separate.

I also updated all these sets. Thank you for your work

.
It's a pleasure to use all this in the game

You will also think about other sets for the game: Australian parks, embankments of your country, unique and historical buildings, port facilities. All this has its own characteristics. I would be interested to read what you think about this.

STD wrote:You will also think about other sets for the game: Australian parks, embankments of your country, unique and historical buildings, port facilities. All this has its own characteristics. I would be interested to read what you think about this.

Maybe in the future when I finish what I working on now will look at some of those ideas.

What I working on at moment:

Bridge Set .. just a few more bridges I want to go get photos of to compare and see if they be worth adding. I don't think I be doing the Sydney Harbour bridge now as which ever way I tried it just looks strange.

Rail set .. Quast65 has made the coding and sprite making for this so much better and easier .. there will be a lot of changes and improvements to this set. Working on new tunnels, level crossings and fences. also looking at adding a slow speed track that looks poorly maintained with grass between the tracks. Like what you would find in country sidings and on private spur lines.

Station sets .. major work to be done to these.

Industry set .. when the new OpenTTD comes available so can have 64 cargos .. will make a new one of these. Looking at 2 ideas .. Combine some of the smaller Industries into one .. be like a industrial Estate .. several Industry's together. also some industries will start out as a 1x1 or 2x2 tiles at most .. especially farms .. farms will only have the House and one or two other buildings and players build the rest .. live stock, crops, machinery etc using a mixture of objects and station tiles. Some other Industries could also be designed where you build it yourself, especially mines .. these can start with just the mine shaft.

Train sets .. got a lot to do here, especially AuzTrains as need to add many trains from other States and add some of the new locomotives, EMU and DMUs that have entered service past few years or will be entering service soon.

Object Sets .. Like to add a Industry Object set so players can extend their Industries .. and have it so can use with the new Industry set I hope to make eventually.

That's roughly what I up to.

Making some Level Crossing Waypoints to go with the fake Roads in my object sets.

Only done wired fence so far for the farm Level Crossing.

See if can make a few more in coming days to go with the power poles.

The farm gates are animated. Will close on approach of a train.

Would it be possible to build conveyor belts on slopes next to the ore crane? See picture below.

Second suggestion would be overlapping belts (see picture below). Would it be possible to have other directions and if built they can connect. Then we could use the across the highways or rail stations.

Would it be possible to build conveyor belts on slopes next to the ore crane?

Maybe do another set of the coal Conveyor belts with Ore in them and possible grain as well.

Shall see what I can do, but might not be till after weekend before I can start on them.

Would it be possible to build conveyor belts on slopes next to the ore crane?

GarryG wrote:No. I meant picture one. What I am trying to say is that we can have an overpass. You have done one overlapped side. Now we need to flip it around and we have another side so we can join them together. Maybe that clears thing up a bit

I see what you mean I accidently put two overlaps to back and none to the front.

Those that over lap to front can glitch depending what is in front or under the overlap sections.

Also see what you meant about some pieces depending which way they facing not like to build on side of slopes ..