If some one can do me a favor and choose some passenger coaches from someones train set that would make nice diners, please up load them here and will look at them and see what can be done.

I have all the templates from 2ccts of their rolling stock, just not got the time to check them all see what ones would look good.


fridaemon wrote: ↑
27 Aug 2020 11:25
Better way is of course as non-track version. But as you said before - it's not possible to do snowy versions of them (remember well?). But I have few railway stations sets which support this option, for example Japan Set3: Stations.

I think many people are used to no snow on stations so should be ok with non-tracks. If ever I design a non-track that players like to see with snow, all they have to do is ask and I make a object of the same type.


Today I be experimentinbg with a idea that "fridaemon" unknowingly gave me a idea for,

If you check his topic page at
viewtopic.php?f=33&t=87401
See if you can figure out what the idea I have got from his last post.

In Brisbane, Australia I believe there are some, and I know there is a underground road dedicated for buses.

So had a quick try see if it will work for buses.
This what bus stop looks like .. road comes out of a tunnel and there a bus stop then road goes back into a tunnel. 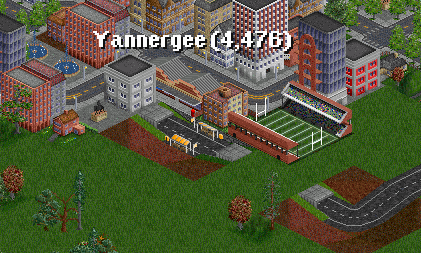 I've only done one bus station with a overlap so far see how it would look. The path ways are objects, but will see if can make a few non-track types to cover the tunnel portals. 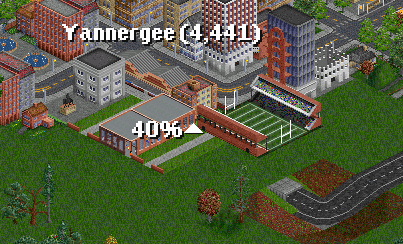 Made some more subway bus stations.

GarryG wrote: ↑
28 Aug 2020 01:52
I think many people are used to no snow on stations so should be ok with non-tracks. If ever I design a non-track that players like to see with snow, all they have to do is ask and I make a object of the same type.

It's not necessary to have snow version for each object, but It's good to have few ones

Started work on new Jettys so some can go on sand.

Theer is 5 styles I experimenting with. 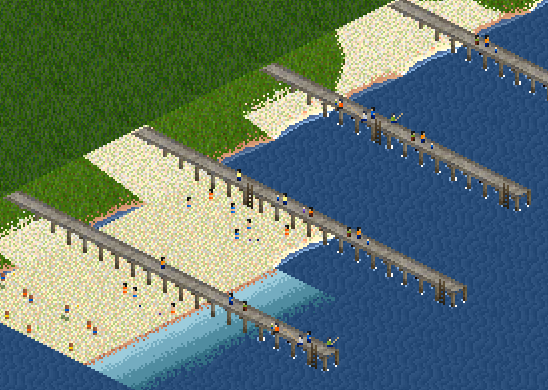 Some Jettys have people on and people fishing.

Jetty is 32 bit colour .. the decking suppose to look like it weathered and well used, except the edges where people not walk as much.

Tried to give the pylons the look as if bottom section is often under water.

A few minor errors .. the default waves should be showing darker sand, but they not. Hope fix soon.

Only done the direction you see in image so far. Will make sure I have these all okay before I do the rest and any junction pieces.

The weathered decking is very nice and the fishermen look realistic!

Maybe extending the Jettys a bit so they connect better to the flat tile would look nicer (especialy if, for example, the flat tile has a concrete surface, rather than grass): 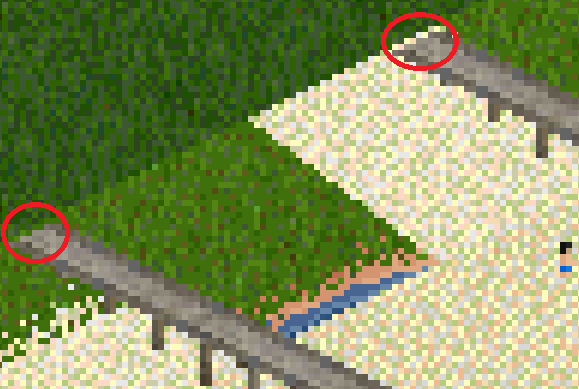 Glad you like it. The fisherman on left side of Jetty I took his rod off him and gave him a darker one so it can be seen easier.


Maybe extending the Jettys a bit so they connect better to the flat tile would look nicer (especialy if, for example, the flat tile has a concrete surface, rather than grass):

Fixed the connection to top of slope.

I think I have them finished now and fixed all the errors that Quast65 and I found .. hope we got them all.

I added a few Jetties with some boats and you can still tie up what other boats you like on the other side of the Jetty. 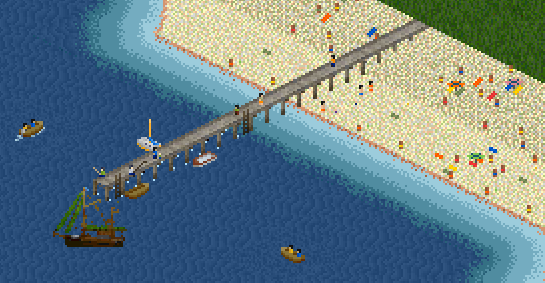 (In image I have a boat directly under the person fishing .. I have since moved the boat as he kept getting snagged on the boat).

Do we need junctions for these high Jetties? If so I will make some.

I will make new lower Jetties and these will have junctions and corners so you can place house, planes and boats with.

Also need to make a new slope aware beach section that has the sand only half way up the slope.

When finish these if you have no objections I will remove all the old 8 bit Jettys.

Have a try and let me know what you think and what else could be added.

Bit annoying I have them in more then one file .. so looking at idea re-doing them so items of the same type are all together in the one location instead of 2 or 3 places.

No sure what I call the sets .. but hope the end result make it a lot easier to find what we want.

Been changing the graphics to the Jetties I made before so they match up with the new ones .. hope soon to do the lower Jetties.

What you think of a half slope of beach sand? 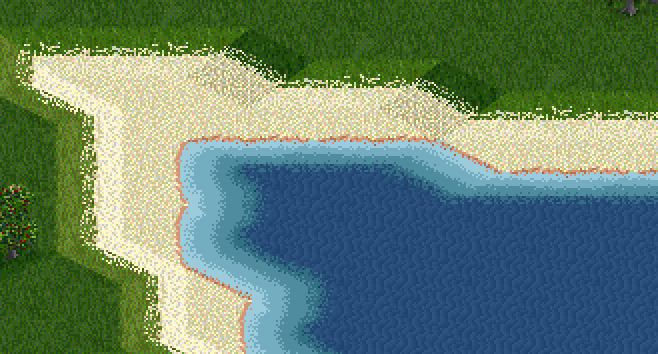 Those of us who been lucky enough to visit a beach out of the city some have 100s meters of sand dunes to walk over to reach the water, and some just have a short slope to walk down to the beach and water.

That is my idea with these in image.

Hope to make another set with water at bottom of slope for those who want only a small beach.

The sand I been stealing from Quast65 Beach Set ..

To the left default surf edges and to the right shallow surf taken from Beach Objects.

The Jetties .. are in 2 files:
AuzWaterObjects it has the Jetties you can see in image except the ones joining the slope and with the shallow water .. they are in AuzWaterAddOns.

AuzWaterObjects and AuzBeachObjects available here now. Hope to have auzWaterAddOns with those other Jetties and some Low Jetties available end of the week if not sooner.

Some ideas I have:
* These half beaches should I make some with the scrub (trees) in the top half.
* The boat with people fishing from it is included as part of the Jetty. But wonder if I should make some separate boats like that as well and maybe some fishing from the shore.

Done most of the low jettys to the new graphics and on sand. 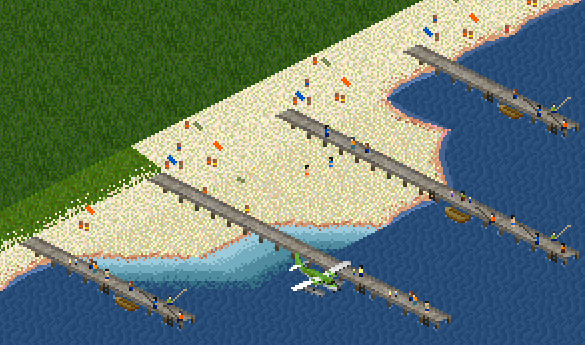 The narrow jettys still to be done when I find a suitable graphics for them. I image they might have the weathered and used look in the middle but not sure along the edges.

Also before I do these narrow Jetties looking at idea of changing the houses slightly and connecting the jetty to them so you can have a long narrow jetty to individual houses if want.

Also all the planes they have no water animation with their floats so hope to fix that too.

You will need AuzWaterObjects, AuzWaterAddOns and AuzBeachObjects to get all the effects in this image and other images that include the beach sand.

I found a error in the AuBeachObjects tonight with the sand and surf and now been fixed in this upload.

I hoping you will have a chance to try what I done and let me know of any combinations that I haven't done or something you like me to add.

Making alterations to the narrow Jetty so they match the other Jetties I been doing.

They can now be attached to the land normal coast line or a beach coast line.

Also changing the positions of the Jetty on houses so they give more variety how you wish to attached the houses. They can have a short jetty or as long as you like.

Not sure when I get these finished as it a slow job.

Any one else finding the forum slow to open and also slow opening pages and topics?

Any one else finding the forum slow to open and also slow opening pages and topics?

Been like it all day but not sure if problem here at home or in the forum.

Yep is slow here as well. I’m using the app and it’s taking much longer to load.

Thanks pal, appreciate your reply. Good to know it not our own internet or computers.

How hard to find what looking for in newgrfs as so many.

His idea be great, but until something like that can be designed ..

It gave me a idea that could help a bit in my sets ..

For instance AuzWaterAddOns .. has a camping section and so does my AuzTownObjects. Those in the AddOns set should be listed with the others in AuzTownObjects so that they all together. In some other sets I could do the same.

So would it look better if I re-label my sets:

Instead of: AuzTowns: Camping and AuzAddOns: Camping .. it could be called .. Auz: camping.

RattRoads: Objects, AuzFences: Fences, AuzPower: Power & Sub-Stations .. all have fences in them so would it be better is they was all found in one section called .. Auz: Fences

Communication Towers and Seawalls are some other objects in more then one area that could be grouped together.

If I change the "Object Selection Menu" it will be displayed like this. 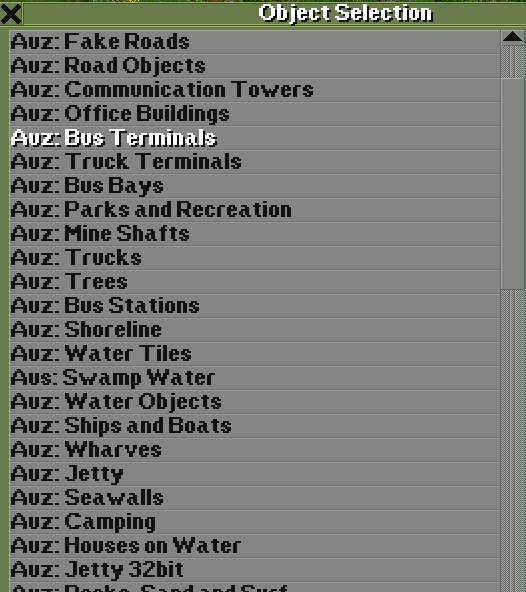 This should also make it easier for those who use laptops and other devises that have small screens as the menu not be a long length ways.

This is a brilliant idea. Often I know you have what I am looking for but I not sure what grf it is in or what heading it is under. Pulling together same things would be great. Houses in houses, roads in roads, fences in fences.
I look forward to this immensely.
Thank you for all your hard work Garry.