Curiosity if I worked on a scale that 1 pixel equals 1 meter how big some sporting fields would be.
They do not include room for benches, cheer girls, referees and ball boys/girls. 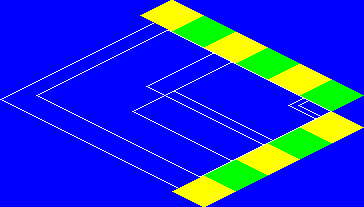 The tennis and basketball they look to small, but will see what they look like at that size. Remember those sizes does not include room for benches, referees and other line side items.

Undecided what to do about the sport fields, so I will upload what I have done to date in AuzSportsObjects and let you
all try and see what you think.

For the rest of the week I go work on one of my other projects.

The 2x2 sports stadiums are pretty close in scale to the original OpenTTD stadiums. And I think this would be a nice set itself, but at the same time it feels too small to me. BUT, for somebody who just wants some additional objects at that scale, this is a good start.

But, like I said, its too small for me. I like the larger 2x2/3x4 fields. The seating around them still needs a little work, but I do like the scale of them. The corners, though, the pavement works need to be parallel to the rest of the pavements rather than diagonal.

The larger basketball courts don't look to be the right scale, the 1x1 courts do. However, they need better defined borders and perhaps they need to be just a tad smaller - if you put them next to each other, there should be a small corridor between the borders - maybe even just 1px. The tennis courts also look a tad too large, they should probably be a similar dimension to the basketball courts. I'd like to see some scaled down stands for these courts, no more than 5-6 rows high. These courts typically see the same large crowd sizes as a football/baseball/soccer game.

Now that I'm looking at it, I think the 2x2 baseball field should be a 3x3 field, with a bit deeper of an outfield.
Do you like drones, quadcopters & flying toys? Check out Drone Strike Force!

Thank you for moving the racing overlaps to that GRF!

kamnet wrote:The 2x2 sports stadiums are pretty close in scale to the original OpenTTD stadiums. And I think this would be a nice set itself, but at the same time it feels too small to me. BUT, for somebody who just wants some additional objects at that scale, this is a good start.

I was given those 2x2 stadiums long time ago.


kamnet wrote:But, like I said, its too small for me. I like the larger 2x2/3x4 fields. The seating around them still needs a little work, but I do like the scale of them. The corners, though, the pavement works need to be parallel to the rest of the pavements rather than diagonal.

I like them large too as can show a bit more detail. Just getting a good size is the problem with many of them. No matter how I make them it almost impossible to scale them properly.


The larger basketball courts don't look to be the right scale, the 1x1 courts do.

These are tennis courts my worse nightmare. To make them to a scale that suits other sporting things they are way to small as no room for details. If I work on 1 pixel per meter that means the white lines that make the courts are 1 meter wide. But as said could be adjusted a bit more.


I think the 2x2 baseball field should be a 3x3 field, with a bit deeper of an outfield.

As yet to re-do the graphics for it and hope make some on a different angle as well. I too think 3x3 size be good. Probably could include benches and dug out in those 3x3 tiles.


Quast65 wrote:Thank you for moving the racing overlaps to that GRF!

Thanks to all those who been giving me feedback on what I trying to do. all helps to get ideas and find ways to improve thing.

But next few days will leave the sporting and work on another project. Something I believe Kamnet you asked me a few years ago. The car parks I made that overlap railway station saying they was too high. I hope to do something with those and make them multi-story car parks and/or shopping centers. Sydney has several railway stations with shopping centers over the top and car park on top of the shops. 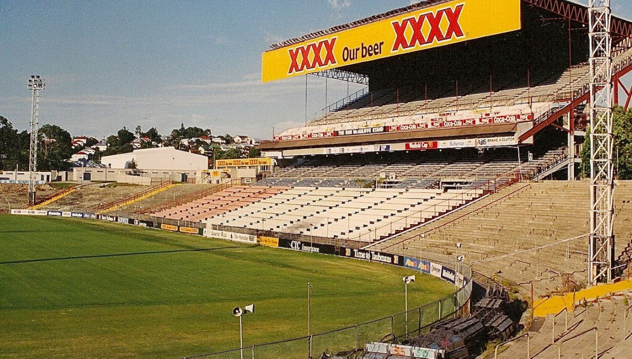 Been playing around see what Multi-story car park I could make and come up with this design. 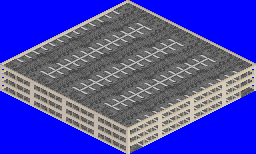 It will be a lego style construction of 1x1 tiles where you be able to make it what ever size you want. This image is a 4x4.

Once I get the design how I want adding extra to it be a lot easier.

This one needs a ramp on the top and probably a stairwell as well.

This is very cool. Maybe a lift building that includes the stairwell? Thanks for all your work Garry.

The work I was doing to Heathrow Cargo Terminal gave me some experience with other designs. Not sure if Heathrow will ever be completed as it will he a real monstrous building, but we never know .. time will tell.

Any way I stole the stair idea I made for Heathrow and added it to the car parks. Just need to make a elevator (lift) to go with it.

Received a PM where one of our members found a issue with my AuzIndObject sets. The object showing in purchase menu was not the same as what got built. (It built the mine shaft instead of the crane).

I fixed this back in September, but I either forgot to upload it or just some of you still have a older version. So here the update to AuzIndObjects.

Everything I have on Bananas is out of date and I have no idea when I be updating it again as I keep fining new things to add or changes to make.

The image shown a few post above is a multi-story car park of 4 levels, I made it 2 short. Needs to be 5 levels, so I still on the drawing board making it.

My intentions is make railway stations from them as well both platform . Car Parks will be 4 levels above railway stations. Also hope to make non-track ones as well and these will be 5 levels high. This way they will all align with each other. 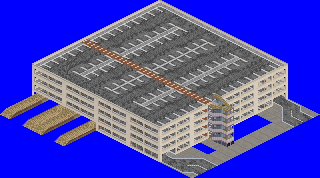 This also give an option to make Park and Shop styles.

also going to look at idea for overlaps to allow bus stops to go under neath the park as well.

Did a set of Multi-Story car parks that are non-track stations.

Will make some platform one to match these so they can also be used for subway stations. 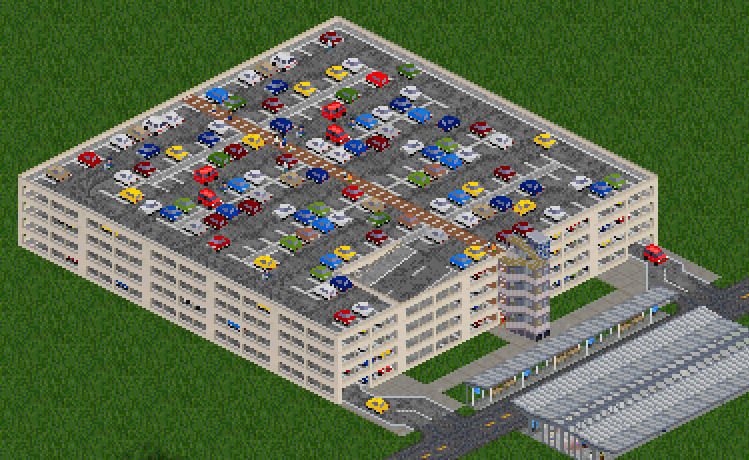 While I ponder on idea for the multi-story car parks, I thought I'd make a set of fences using the black mesh ones I did for the sports. But these can be used anywhere. 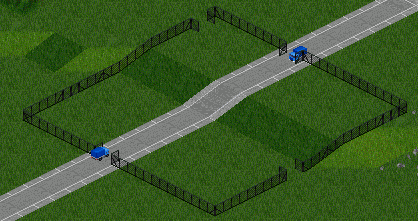 There are 2 lots slope aware. Second one has the post support to give your fence extra strength.

There are several corner types. No gates, closed gates and open gates.

Also so open and closed gates on straight pieces and to finish it off there are some overlap gates so you can have gates at entrance to industrial sites and vehicles can pass through. like in image.

These are railway station non-tracks. Not sure yet if I try doing any to go over the top of railway platforms. Time will tell.

This image showing all the pieces for this car park. 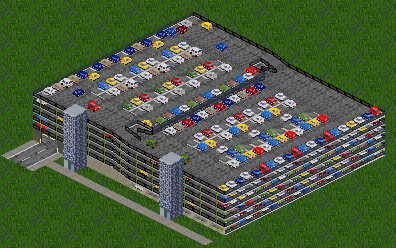 This is a smaller version. 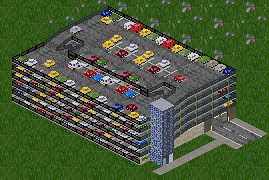 Been rotating back and forwards between object sets last few days. Hope to add a few more things before I upload them.

* I will give update to AusFences as I made a boo-boo with the black wire mesh fence. The gates that overlap the roads, I had one out of alignment.

Hope to add at least 2 more fence types to this set when get chance.

I update the baseball field .. it now a 3x3 size. 2 sets one with fences and one without fences.
The set with out fence undecided if I should remove those seating and dugout. Make the dugout a separate object this will allow larger grand stands and seating to be placed around these if like.

Suggested before about adding gate ways to allow players access to the fields, so some of the grand stands I removed a small portion of the fence and advertising.

Hope have ready for upload in time for the weekend.

Made a set of car parks to go along the roads. called them Street Parking. Just not sure where to put them. 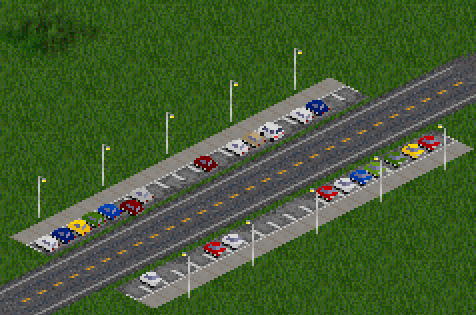 Before I upload those 2 any suggestions for additions to the street parking?

How often you played the game and lost track of time .. well now you got no excuse not to know what time it is.

I've added some town clocks. I stole it from my Sydney railway Station set.

If placed in middle of town or city because it is very tall so should be seen from almost any where.

The town set also has those street packing as shown in image above.

There 4 2 in each direction .. one has flowers around the base and the other the stairs. 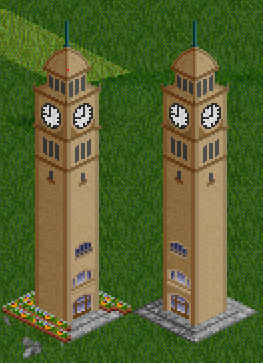 This how it looks in a town. 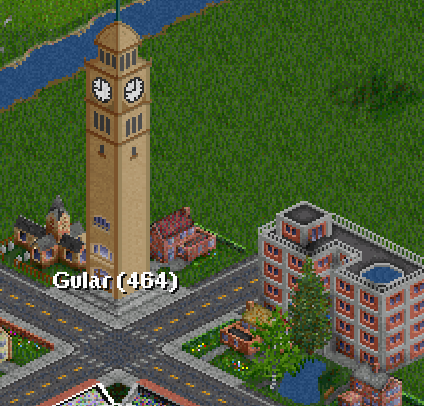 I would like to suggest concrete blocks characteristic of ports as an object. A breakwater of this type that would make port-quay compositions.
Top

gravelpit wrote: ↑25 Nov 2020 09:29 I would like to suggest concrete blocks characteristic of ports as an object. A breakwater of this type that would make port-quay compositions.

Was asked some time ago if I could make some breakwater objects .. started collecting ideas but did not get far with it as got side tracked on other objects.

The breakwater in your image not sure how easy they be to make, but rock on should be ok.

A couple of places that I lived in New South Wales Australia had breakwaters to the river entrance .. Newcastle and Yamba so both like to try do. I'll have a look at something next few days before I get back to the other projects.

Forgot to include latest up date to AuzSportObjects.

It has to new baseball fields. The old one was 2x2 .. this one is a 3x3 and is 32 bit graphics. If you have a game in progress and you used the old baseball, not sure how this will effect that game.
One set has the wire mesh fence and other set does not have the fence. Also did some dugouts that can be used with the baseball and possible some other sports as well.

Had a go at some breakwaters.

Those concrete blocks not easy to draw, so I found some rocks instead.

The road along the top will allow people to go rock fishing or go out to the far end when the next storm comes and see if the waves will wash them off.

The will connect ok to seawalls 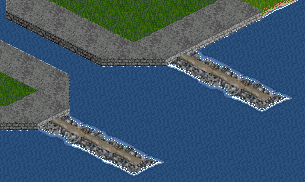 And I did a slope bit to connect to the land.

Made some improvements to the breakwaters. Hope these will protect your harbours. 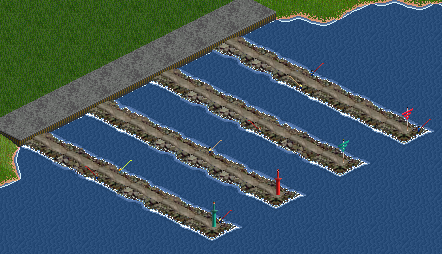 The menus are multi-select for 8 items. I tried to make the rocks along the breakwater a bit different in each of the 8 items. Also a second selection if you want fishermen along the break water.

The end of the breakwaters have to choices of beacons. The older style triangle shape and something a bit newer looking. These too have multi-select menus and have fishermen as well if like. The beacons also have animated lights.

Let you have a play with these so can see how they work. I go try do more to the multi-story car parks.

Garry, A nit pick, on the baseball field, you should move the guy between first and second base out to center field.
Top
Post Reply
1023 posts