Experimenting with idea by using other peoples work see if they blend together.

Using the UKRoadset with signs and the Dutch Road Furniture with signs gave me some ideas .. bridges also have signs on the approach so yesterday went travelling to confirm this.

Sure enough I saw the signs on the wooden road bridge at Awaba. It has black and white signs at the approach to the bridge and also the yellow reflectors painted on ends of the fences..

Rail bridges also had warning signs on the approach so see if can make some of these later too.

So I added the black and white signs to a few of my road bridges see how they would look. Some bridges might also get the yellow reflectors. 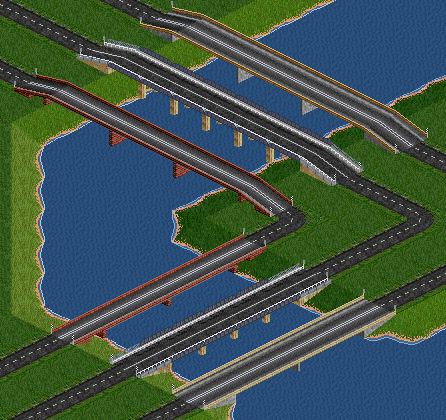 While making these changes also found a error with the wide bridges when making them 5 long so I fixed that.

Here the new file with the signs on those few bridges so you can see how they look in your games.

Idea with some road bridges .. the abutments instead of the square brick and concrete look see if can make them bit more realistic with piles of gravel and a retaining wall..

These I called culverts as they based on some of my road objects. 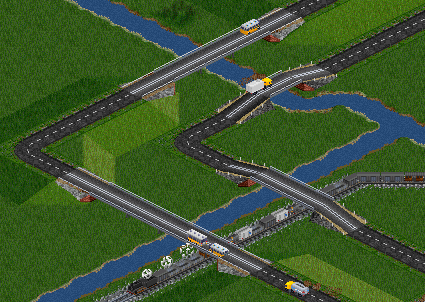 The humps have white guide posts and the flat abutments got guide rails.

These mostly designed for going over flood planes, rivers and railway lines. Can be used to cross lakes and oceans if you like.

Will be making one more culvert with concrete culverts and/or water pipes.

Built a Culvert for the railway lines.

It isn't intended for road vehicles and ships to pass under them. Can make them multi levels and lengths but may not look as nice if just used in one level. 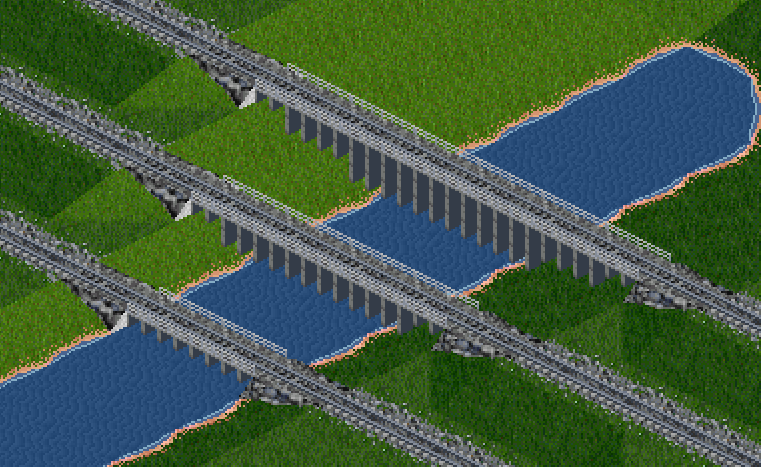 I seeing if I can remove the box like abutments from most of my bridges and make them with retaining walls and rock/gravel sides like in this image.

If like to try what the culverts here the file.

Still a lot of work to be done before these be finished.

Some wooden road bridges hope have in next issue.

Next issue may not be suitable for games already using the previous issues as I made a few changes.

I like the culvert bridge. Maybe you could make a bridge with the same pillars and more space between them ? This bridge would do particularly great for urban areas.
NewGRFs by Tony Pixel :
North American Passenger Railroads
Not Enough Subways

acs121 wrote:I like the culvert bridge. Maybe you could make a bridge with the same pillars and more space between them ? This bridge would do particularly great for urban areas.

I'll have a look at that idea .. might make a good wide bridge for double tracks and also freeway roads.

But not be tonight as Friday nights are footy nights .. Storm Vs Panthers .. I don't have any favourite team .. just like to watch a good game.

Working on the Stone Bridge in Sydney that crosses over Eddy Avenue. 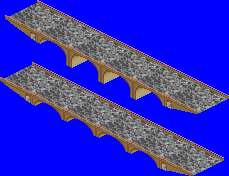 The bridge in Sydney has 6 tracks. So hope make these bridges wide so hope look good for multiple Tracks.

Got a few new bridges done and changed graphics on some. 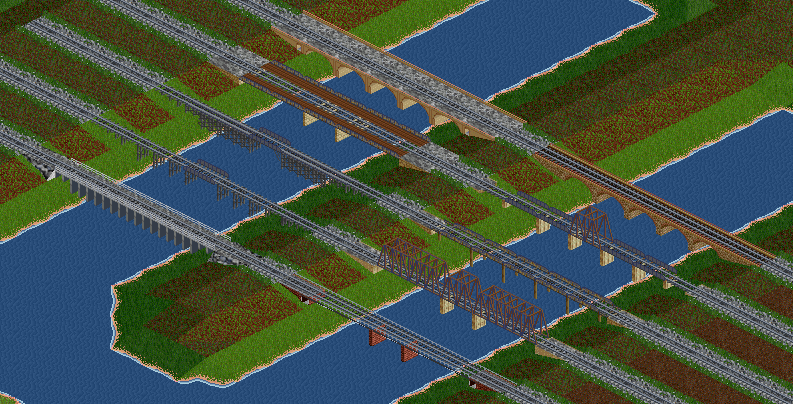 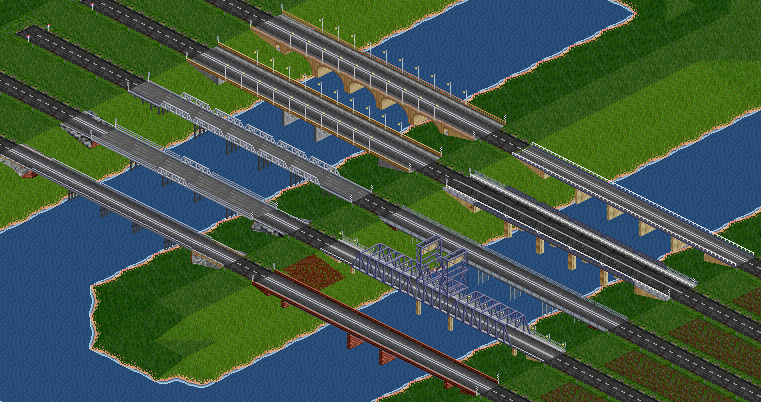 There is room for 3 more bridges for those whoplay the OpenTTD normal version. Those who play using the JGR set .. have room for 6 more bridges

The Stone Pylon Bridge in tend to replace this with a narrow version of the Sydney Bridge.

Another Culvert bridge .. hope to make it with pipes which means it not be suitable for more then 1 level in height.

A bridge based on the Cougal Bridge far north coast of New South Wales. If like to have a look see
https://www.bing.com/images/search?view ... ajaxhist=0

If like to play around with what I done so far and if see any graphic errors that I missed or suggestions let me know.

ISA wrote:They are nice! As I have not use them yet Ill just ask... Are they rail and tarmac aware?

They are rail aware but not road. Not sure if can make road aware on some of them. If they was road aware it save a lot of work.

One thing you do remind me of is I forgot to adjust the different speeds VR and trains can cross the bridge. Those wide bridges should be high speed.

This has been done with the covered bridge from Andrew350's bridge set.
NewGRFs by Tony Pixel :
North American Passenger Railroads
Not Enough Subways

Edit: If players want to keep your default bridge road surface, they should build their bridges from within the default road GUI and not from within a road type GUI.
wallyweb on tt-forums: Screenshots - Projects - Releases
wallyweb on Simuscape: Projects - Releases
Other Stuff: TTDPatch 2.6 "Nightly" download - cirdan's OpenTTD branch (New Map Features)
Screenshot Of The Month Contest Winner: August 2015 - Tied May 2016 - January 2018 - December 2018 - May 2019
Top

Thanks guys for the information you provided above.

All my rail bridges will use what ever rail set you use.

But my road bridges have what I provided. These are same roads as the default roads from the game.

The road I did on the approach are UK roads.

Fixed a few issues with the bridges.

Had speeds wrong on many of them.

Also improved the graphics on the Sydney bridge .. had too many holes in the railings .. I now made them a bit closer to how they are in real. 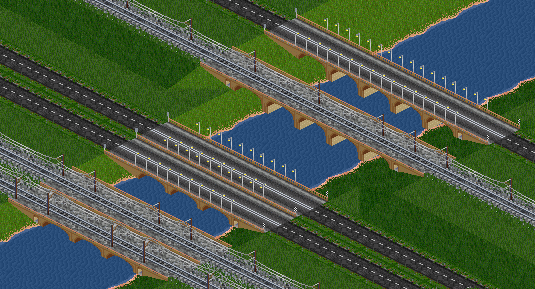 Also added a few extra street lights to the Sydney road bridge. Could put the light on the abutments too, but the lights closes to you will glitch as vehicles will drive over them.

If any one wants the source to any or all the bridges let me know and will send to you.

Here the game file again with those improvements.

. They look very beautiful. Nice work, GarryG. I just keep track of all the changes in this set, download the latest versions and check them in the game. While all suits me, the graphics errors I discovered. I'm thinking of using this set of bridges in my future games. The bridges look awfully cool

What do you think about implementing the iconic Harbour Bridge of Sydney ?
NewGRFs by Tony Pixel :
North American Passenger Railroads
Not Enough Subways

. They look very beautiful. Nice work, GarryG. I just keep track of all the changes in this set, download the latest versions and check them in the game. While all suits me, the graphics errors I discovered. I'm thinking of using this set of bridges in my future games. The bridges look awfully cool

Thanks kindly for your compliments.


acs121 wrote:What do you think about implementing the iconic Harbour Bridge of Sydney ?

Would love to do that one . but not sure how it would go as such a large bridge and has both rail and roads. What you think Wally would it be possible? Not necessary have both road and rail, but just with one or the other?

Had a go doing the Cougal bridge. 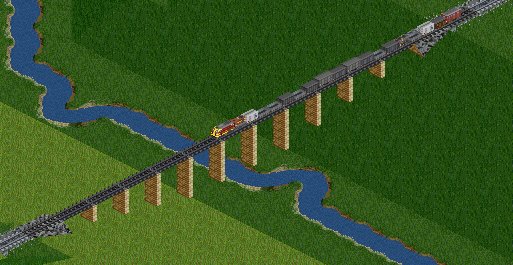 Not designed for 1 level if ships and RV need to pass under it.

The RL bridge has road on one side and rail on the other. So it's possible as a large bridge with edges sticking together, like a few others.
NewGRFs by Tony Pixel :
North American Passenger Railroads
Not Enough Subways