This is the project Westeros town set! providing houses and other buildings for all climates.

The series A Song of Ice and Fire are the fantasy novels Written by George R. R. Martin (which inspired the TV series the game of thrones).
Westeros is one of the the main continents, there are many cities and climate change from the subarctic in the north to the sub-tropical in the south.

They are all under the GPLv2 license. Of course we are far from getting a complete set but this is just the beginning!

Any suggestions, graphics, ideas (especially for the sub-artic and sub-tropical) or comments are welcome

Those are pretty cool, really like your sept of Balor.
All my projects are GPLv2 License.

I am not an artist

How about a nice new town set?

thank you, it really is what I like less.

I still adjusted some small things added another building 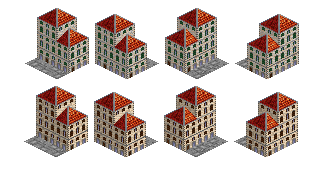 Dear, Mr Bruco, what licence for these nice buildings?

all under GPLv2 license

all under GPLv2 license

I think of such a set of objects that each is free to create what most like.

I'm not suggesting either/or. I'm suggesting both. A base town set to automatically build, and an object set to build as you wish.

I like the more modular designs of these buildings. If you did give some thought to a town set, this would work especially well for having buildings that look like they are intentionally connected. see Zepherys' Martian colony building set, for example.
Do you like drones, quadcopters & flying toys? Check out Drone Strike Force!

That are nice buildings!
Greetings, S-Transport
My pictures
Top

last night I thought and I said why stop at a simple set of houses, why not do as opengfx mars and create a medieval / fantastic theme world with industries, cities, vehicles inspired by the A Song of Ice and Fire?
let me know if it is a good idea because it will take a lot of work!

king'slanding.png
these are all buildings arranged in order
(196.83 KiB) Not downloaded yet

I think medieval set would be perfect for games from 1700. You can make total replacement for all eras(For example, Medieval→ Pre-Modern→Modern→Near Future→ Far Future), with matching industries
Sorry for my "great" English
Top

more or less what happens in the game currently, there are a lot of NewGRF providing buildings, vehicles and industries covering all eras.
Top

I would be glad about one set without any modern building or one, where the construction of modern buildings can be disabled.
Greetings, S-Transport
My pictures
Top

there are a lot of NewGRF providing buildings, vehicles and industries covering all eras.

But that doesnt have to stop artists and coders providing even more buildings, vehicles and industries.

PropH wrote:I think medieval set would be perfect for games from 1700. You can make total replacement for all eras(For example, Medieval→ Pre-Modern→Modern→Near Future→ Far Future), with matching industries

To be accurate, though, the style of architecture of the fictional King's Landing is largely a preserved form of Croatian Pre-Romanesque as seen in the Old Town of Dubrovnik, where the scenes for King's Landing are filmed. Its famous buildings, port and fortified walls were largely built in the Middle Ages, between the 1100s and 1300s, and has largely remained in this style so due to the city's reputation for diplomacy (which meant it wasn't attacked, destroyed, its peoples scattered, and then rebuilt) and as a desirable tourist destination for centuries.

Much of this style was wiped out as other European cities rebuilt in various Romanesque and later Gothic architectural styles from the 1200s until the 1600s.
Do you like drones, quadcopters & flying toys? Check out Drone Strike Force!

whatsoever those buildings will become changed so many things, the most important are the texture of the walls, the shadow on the windows, and the decorations in some buildings.
in addition I have made available the buildings without texture

king'slanding.png
Wanted texture for great sept!
(201.01 KiB) Not downloaded yet

KLcolour.png
(42.9 KiB) Not downloaded yet

hey
I'm back
First of all, forget the old graphics and anything before this moment.
There are still bad when I realized that you can use a limited number of colors for NewGRF so from now on I will use only the dos palette