paulicus25 wrote:Unable to get the set to work properly after latest update downloaded.

Did you increment the minimum accepted openttd build number for the set? Or add any dependencies?

The set appears in the grf list and downloads page, can be added to the grf list and loaded into the game and shows as green in the grf loaded page but no vehicles of any kind appear. no busses, lorries or trams. Set worked perfectly fine for me until I updated this morning.

In which year did you start and did you disable expiring vehicles in the advanced settings ?
NewGRFs by Tony Pixel :
North American Passenger Railroads
Not Enough Subways

Strange - I've not made any significant changes to compatibility.

What do the parameters look like in your NewGRF settings? I know when I upgrade on an existing installation I sometimes end up with the parameters to enable certain types of vehicles set to false.
Top

acs121 wrote:Take a look at BATS (downloadable in BaNaNaS).
Lots of trams in this one.

Some go up to 2012 IIRC. All used in Britain and I did a heap of research to ensure the stats were correct.

I don't seem to have the same issues as paulicus25, but something perhaps a tad strange. I've updated to the latest version and the usual vehicles are still there (currently in December 1946) but no sign of any new trams. Have I missed them? (appeared back in the 1900s and they're all obsolete now) or are they yet to come?

For some reason the new parameters for enabling trams get set to "false" when you upgrade - it's worth checking there as a first port of call.
Top

No station refit for horse trams, is that intended?
Also, 24 tons or 60 passengers for a horse tram seems a bit too much with realistic settings, I would prefer these values to be halved for realism.
Top

Rails are incredibly efficient, as long as your tram route is flat! 60 is however a bit of an extreme example, although that was the capacity I found in my initial research now I start cross-checking I can only find a couple of references to that number in contemporary literature and the odd tram in Australian cities, and 48-52 seems more normal for a two-horse tram used in the UK. So I'll probably knock the capacity down to 48 in a future update. I'd like to do an ID renumbering at some point, so I may as well tweak capacity downward while I'm breaking compatibility.

Not sure why the station refit doesn't work, that's probably an NML accident on my part. Will have to take a look.
Top

Hancock Enterprise can transport 22 passengers and it seems very similar in size to horse tram. It would be more realistic if that tram had two wagons maybe, but with current size it's like 60 passengers should be compressed there like fish in a can.
And I really doubt that 2 horses would be able to tow 24 tons of cargo.
I tried to make a grain-food route but found that I cannot refit cargo tram at station. I use JGR patchpack if that matters.
Thank you for making this excellent set and for your attention to early period of transport!
Top

From what I've found, a single horse could pull roughly 13 tonnes on rails. So, 24 tonnes would be the load for a pair of heavy draught horses. Seems correct to me

Update: It was the parameters. Normally I'm pretty good at checking those every time i update a set. Guess this time i missed it. The previous version of the set i was using was much older and those specific parameters didn't exist at all back then (v. old), so when they were added they went to default, which seems to be 'off'. Perhaps a recommendation to make the default for the parameters be so that everything is turned on? That way it might avoid some confusion for anyone else updating from a much older version?
Top

The parameters have defaults to turn vehicles on but for some reason they don't get set properly when you upgrade an existing installation. Not sure why - maybe I'm missing something in NML?

In other news, there's a new update on BaNaNaS. This doesn't change any gameplay (apart from a more typical cargo capacity for the horse drawn tram) or add any new vehicles, but does fix a couple of things that have been annoying me for a while:
The first is a boring internal detail, but it's been corrected. Note that this is a breaking change and you won't be able to use the latest update with existing games - I've tried to avoid them where I can, but the internal ID scheme was becoming quite broken and needing a lot of workarounds.

The second is less boring or internal. Every vehicle in the set has been reprocessed using a new technique which works out the lighting normals and calculates shading based on those. IMO it's a big improvement and makes a lot of company colours usable that weren't before. Some "before and after" screenshots: 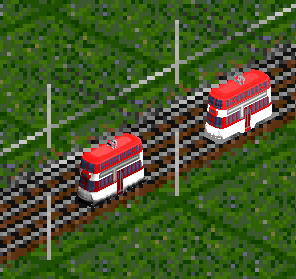 The extra definition also helps a lot with the 1x view. It's still not at the level of a hand-drawn 1x/8bpp set, but the vehicles look a lot more distinctive and less like a flat blob of company-coloured pixels with the shading updates: 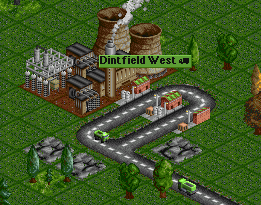 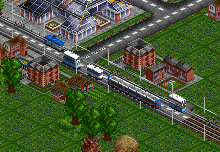 Haven't been on this forum in an age, and bloody hell what a pleasant surprise! These look beautiful, you've done a great job on them, bravo!

With the new livery by group feature the trams look absolutly stunning, 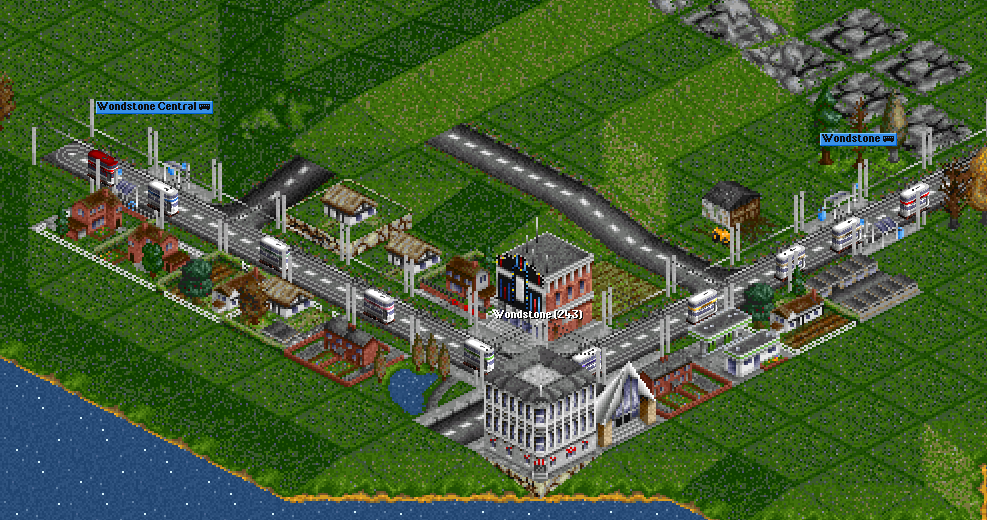 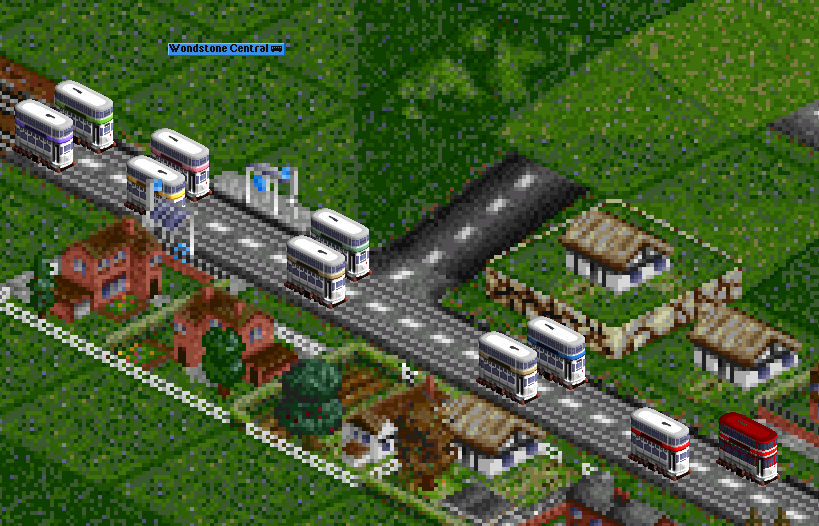 Standard Cars now have an alternate refit with the roof and window details shown in the main body colour.

Version 46 is now live on BaNaNaS. Adding alternate livery options doesn't appear to break compatibility so you should be able to upgrade existing games.
Top 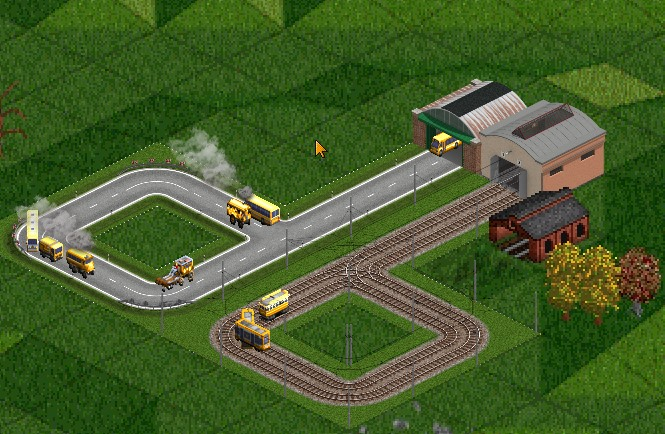 Timberwolf's cars look rather flat against CZTR, but it does not look bad

Thanks for the colour refits,

one more slight playability improvement for next version, can you tweak the load speeds please,
i am finding the baloon is very slow to load at 6px per tick given that it holds 92... that gives 32 ticks for a complete unload and reload which is ages, when in reiality they are fairly fast to load as far as trams of that era go as they have a very wide centre door

A minor update - I noticed that the refit for Petroleum Fuels in FIRS 3 was showing up as a curtain side cargo trailer rather than a tanker, which has now been fixed.

Tram loading speeds have been increased to make them more useful in urban situations.

Finally, since it is that time, there is also a new easter egg to discover

The next version of the Timberwolfian road vehicle set is number 50, and I thought it would be good to mark it with something a bit more major than just a new vehicle or some minor bug fix.

There are two things which have built up to frustrations with the set. One is that it's never fit in well with other sets, especially at default zoom - the vehicles are a bit tall and a bit bright. (The brightness also means some livery colours don't really work - it's hard to tell yellow from orange, and a lot of the lighter colours end up washed out).

The other, as the CZTR screenshot above shows, is that things look a little on the flat side.

So I'd like to announce for version 50... finescale. Every vehicle has been re-rendered, and approximately 75% of the set has seen some detail or other revisited to make things look smoother, less jagged, or fix alignment bugs (such as the Scarab's tractor unit disappearing in some orientations). 1x zoom now looks a lot more "TTD-like": 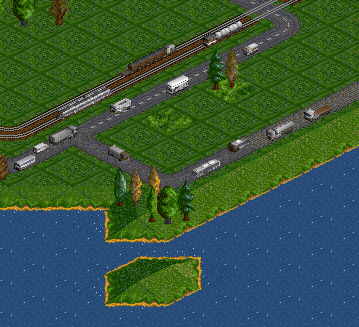 And for those who play in 4x, there are big improvements in shading without losing the "hand-drawn" feel of the set: 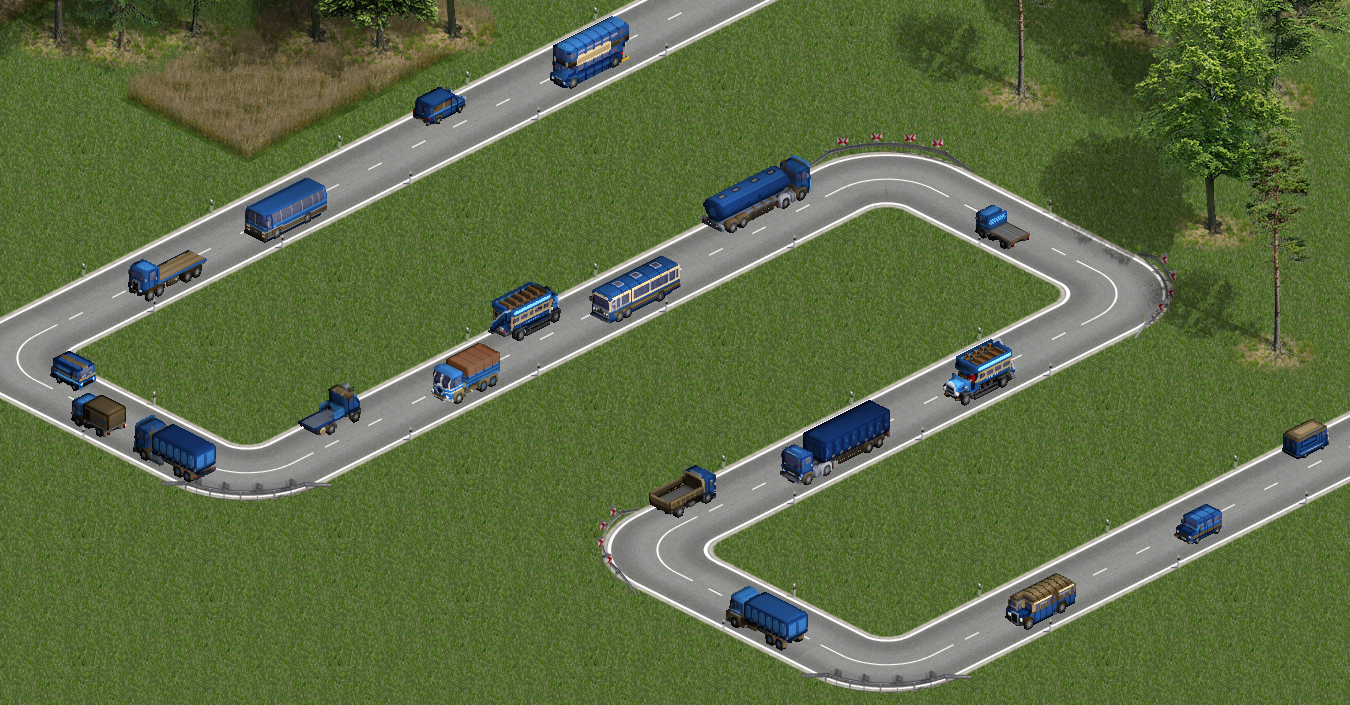 The new version is on BaNaNaS now, as it's a big change any bug reports or things I've missed are welcomed.
Top
Post Reply
179 posts