I think the finescale versión it´s much better and more realistic, the previous one had a more comic or toon style due to its proportions, very good job!
Top

For me, the current version has become more beautiful and realistic

. It is always nice to see changes for the better. Really great set

A rare work-in-progress shot... I've made some improvements to my toolchain which should help me add better FIRS support and more loading stage graphics.

At the same time, it's an opportunity to revisit some of the worst sprites and replace them.

Here are some ERFs, before on the left and after on the right:

Work continues... I'm hoping to have things stabilised and ready for a release in the coming week, although no guarantees as I don't know what testing might uncover

Speaking of testing, I'm surprised nobody has complained about the big gap in the early 2000s after the Leyland Olympian expires where there are no double deckers available for purchase! To rectify this, I'll be adding a Dennis Trident to keep those double decker routes supplied with new vehicles: 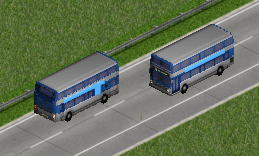 It's finally time for a release announcement. And it's kind of a big one.

The past couple of weeks I've found myself with a couple of weeks that are sort of spare but not entirely, in that I needed to learn a new programming language. This seemed like a perfect opportunity to make a bit of an investment in tooling for Road Vehicles, and so it's been rejuvenated with new renderers, cargo substitution tools and a powerful (if not always entirely user friendly) templating system.

With better rendering, I felt inspired to improve some of the oldest sprites - those new ERFs are just a small sample of the huge redrawing effort that's swallowed all of my non-programming life the past few days.

So what can you look forward to next download? 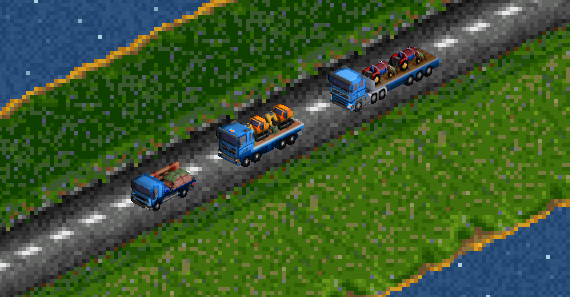 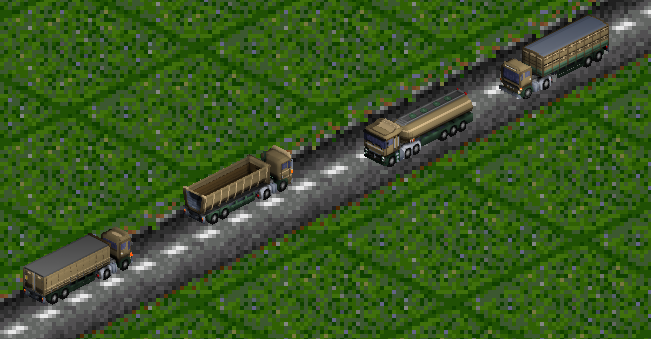 A couple of minor refinements to early vehicles - instead of mixing between drums and barrels for fluid cargos depending on the vehicle, they are now used appropriately depending on the cargo type: 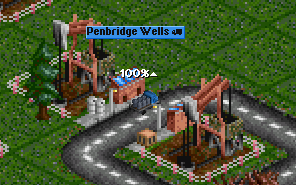 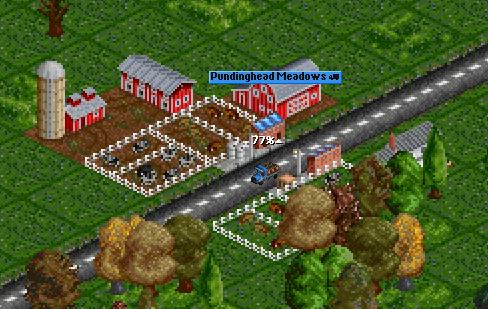 Other early vehicle improvements include the Thornycroft J being refittable to all cargos, and redrawn models for the Badger and X-Type.

Naturally, there are some new vehicles: 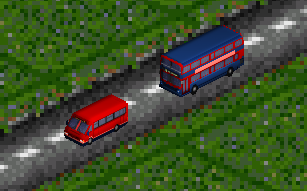 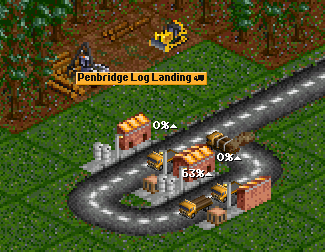 This brings me to a little bit of housekeeping - all these new sprites mean a very large set, and I'm aware 4x zoom is not used by everyone. In fact I have a friend who has never used more than 1x zoom due to finding OTTD's sprites too blocky at any higher zoom. But nor is 4x unpopular enough to justify its complete removal... however, to save load on BaNaNaS and disk/memory usage for those who don't use it I've split the set into regular and HD versions at 30MB and 90MB apiece.

With nearly everything being new from the NML source code to the sprites themselves, I think this justifies an actual version number so this release will gain a bold tag of v2.0.0.

While a lot of longstanding bugs have been squashed I have no doubt introduced new ones that I've missed, so any reports of missing cargo, 0hp vehicles, capacities swapping unexpectedly between refits or everything expiring leaving you in a vehicle-less void would be much appreciated. Otherwise, by the time you read this the new version(s) should be on BaNaNaS so happy motoring and enjoy those rather more proportionate Fodens beetling about your landscape. 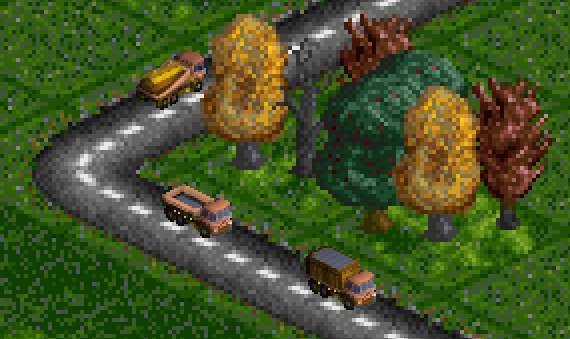 Quick tests of HD version, lots of new starts different era's etc. looks good.
Only one niggle,so far, all the 'exhaust smoke' does look like a diesel train.
Personally, although I know diesels smoke, this is a little to much, for me, others may like it.

I ought to look into reducing the density of smoke, but for now if you want a quick fix there's a parameter to disable it more in line with older, smoke-free versions of the set.

(A side note for everyone: it's worth checking the parameters anyway as they don't always get upgraded cleanly and some have moved around)
Top

missed that parameter, will go back and have a look.

Edit: How did I miss that.

Hey all. Been a while since iv'e posted but i figured this would be useful.

Great work with the new changes - the new shading has vastly improved the neatness of the models, i would say, although they're personally a little too dark now for my tastes. The colours do look rather dull now compared to a lot of other sets and openttd in general. Perhaps that is just me though.

Think I found a bug with the set. Using the new HD version 2.0. It seems there is a capacity issue with some of the early trams. Have found at least 2 so far....

Oopsies.png
This doesn't look right to me. Unless the vehicles are N gauge. And even then....
(87.44 KiB) Not downloaded yet

These two horse drawn trams, one has inconsistent capacity between purchase window and reality, and one has a case of black hole wagons. And its not just the vehicles cargo - the black hole wagons are like that for all cargo types on that tram.
Top

So many vehicles in one cart... I think you found a mobile depot!
Creator of the Openttd Challenge Spinoff, Town Demand patch
After action reports: The path to riches, A dream of skyscrapers
Top

Thanks. The horse-drawn tram is a typical silly, I'd copied some of the row for the stagecoach in my tracking table.

65k capacities are happening when you have "realistic capacities" enabled. My tracking table uses -1 as the value to indicate the "realistic" capacity for a vehicle is the same as the "gameplay" one. But there's no check in my template for the same value and so it reports a vehicle capacity of -1 which (because OpenTTD is using a 16-bit unsigned int) gets wrapped to 65,535. Should be fixed along with some other tram capacity inconsistencies.

I'm assembling and uploading a fixed version (2.0.1) to BaNaNaS as I write this.
Top

OK, it's now up. You should also see some improved support for FIRS Steeltown, with more appropriate cargo graphics used for the various materials.

About the shading, this is something I have also pondered, particularly running my vehicles alongside Road Hog whose trucks are bright and bold rather than muted. Tweaking the balance between mask colours and sprite levels is a continual challenge but maybe there are some further improvements possible.
Top

I've been playing about with shading and I think I may have something a lot closer to other sets. Here's a comparison of the work in progress with Road Hog: 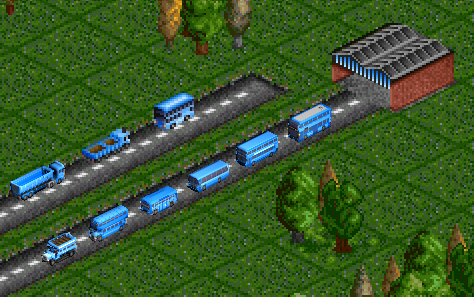 And another with UKRS3: 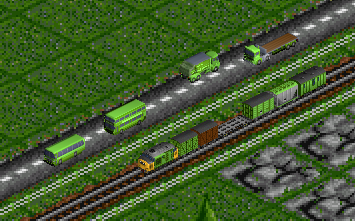 (The second I think makes a good case for 2x vehicle sets!)

For the interested, my approach historically was to take the effective grey levels of the company colours, and use those for the underlying sprite. Those colours were also used directly for the colour mask, which means I was effectively applying two lighting models: one as an artistic decision when I model the voxel object, and one as a mathematical decision when I shade based on shape/normal/etc. This is a holdover from early versions of the set which didn't have the second part and so lighting had to be applied at the voxel level.

What this results in is a tendency for things like roofs and bright spots to be over-shaded, and create too much contrast in the model. Historically I'd taken a couple of approaches to this:

* Reduce the range of the mask colours by moving them towards the centre of the ramp. This works but gives a very "flat" appearance, especially for reds.
* Darken and reduce the influence of the lighting model. This also works (better than changing the mask colours!) but then ends up with the very muted tones of the current set.

What I've done for the above images is to remove the contribution of the company colours to the underlying sprite, but still apply them fully for the mask. This means I can make the lighting model much stronger without blowing out the contrast, so you get both the bright and bold colours of Simon Foster's graphical style while still getting a sense of shading and depth.

I think there's some tweaking still to do but this is getting close to an art style that's right for the set.
Top

Nice work!! I just upgraded my game from your previous set to the new HD set (glad they don't collide with the old GRF ID, so I was able to use the fleet replacement feature) and I really like them.

Have you considered turning the FIRS recyclables into bulk cargo loaded into either an open-top container, a skip or even a trash-compactor (those can come as small as a Fuso Canter)?

Right now, Recyclables always go into a classic closed box truck in your set by the looks of it, although it seems like that use case is mainly limited to transporting old plastics in reality. Having some alternatives available would be pretty awesome I reckon.
My screenshots
Top

It's an interesting thought - ideally I'd like to re-use one of the existing sprites as adding a completely new cargo ups the file size a lot.

In the meantime some more work in progress on brightening up the colour palette and finally adding some new vehicles, with another generation of the Trident/Enviro400 family: 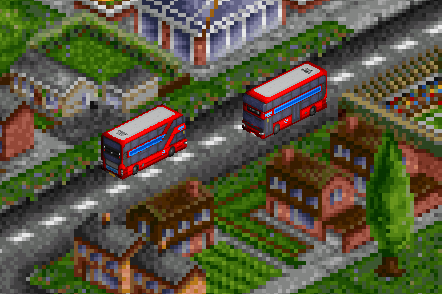 My plan is to spend a bit more time today creating sprites, then maybe a release either at the end of the evening or some time tomorrow.
Top

Sweet, I'm looking forward to it.

To retain existing sprites, how about sharing those of the Scrap Metal cargo? The dark scrap would make a pretty convincing impression for Recyclables, I reckon.
My screenshots
Top

That's a good suggestion - I'll do that for the next version.
Top

The updates to the shading and improved recyclables handling are probably the biggest changes, but there are also some new vehicles. A preview of what you can expect (both new and old): 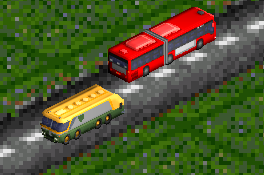 Outside of the set itself, the repository now has what feels like it might approximate some sort of documentation! This probably isn't so useful for veterans (unless you want to build the set or replicate my workflow) but if you have new players you're trying to introduce it may help: https://github.com/mattkimber/timberwol ... /README.md
Top

Great update to this set. It will be interesting to try it in the game. Are you planning to add trolleybuses that were actively used in the UK in the 20th century to this set? Similarly, we are interested in the issue of modern electric buses. It is interesting to know your opinion on these issues. There is a real lack of content with electric road transport. For example, trams are very decently made for the game

Trolleybuses would be interesting. With new road types having been added to trunk since I began the set, I would like to take advantage of that and pick a road/tramway set to support with things like whether trams require electricity, minimum road grades for vehicles and so on. Trolleybuses would fit nicely into that. Are there any good road sets that include trolleybus wires?

In other news there's a minor update (2.1.1) now on BaNaNaS which improves some vehicle alignments, particularly the light rail and hybrid tram ones which were incorrect when used as rail vehicles. Since this also coincided with a fairly major update of GoRender (improving the ability to make sprites of arbitrary sizes and correcting a few normal calculation bugs) let me know if you see any weird sprites, vehicles that don't point in the same direction as the roads or other graphical bugs.
Top
Post Reply
179 posts