Hm. That's odd, as a version of it exists on the ECS GRF, http://www.tt-wiki.net/wiki/ECS_Town_Ve ... atch_Tower

ECS has the same license as the graphic (they probably collaborated on that GRF together), as I understand it I cant use it in this GRF (that is GPL-licensed)....

Quast65 wrote:ECS has the same license as the graphic (they probably collaborated on that GRF together), as I understand it I cant use it in this GRF (that is GPL-licensed)....

Well, that's a bit of a shame then

Oz didn't leave, he just set up a new shop across town, that's all. Still, he's not been very active since then.

BTW, reading his discussion topic over there, appears that he does want to recode some of his stuff as objects.
http://www.simuscape.net/simutalk/viewt ... =138&t=552
Do you like drones, quadcopters & flying toys? Check out Drone Strike Force!

Playing around with new Idea 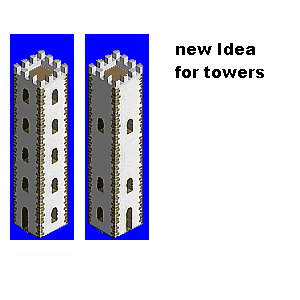 still have to make the backsides

forget the last idea...stupid one...

I dont agree, the overall shape of the tower is nice and I like the corners!
The windows and entrance however should be smaller to fit in a bit more in the OpenTTD world and the white walls should have some more texture.
Also the battlements on top should be narrower/smaller/thinner (hope you get my drift

) to fit into the OpenTTD world, they are as big as a car now

So, dont give up on this yet!

With this I have some more issues....
First I have to ask, is this a 3D model you found on the web and have converted to OpenTTD-scale and perspective?
If so, was the original model copyrighted?

If it is entirely your own work, then I have some other things to point out (and I apologise in advance for maybe being a bit harsh and very strict, but sometimes I take pixel-art a bit too serious

I only point out these things so that objects will fit in more into the OpenTTD environment): 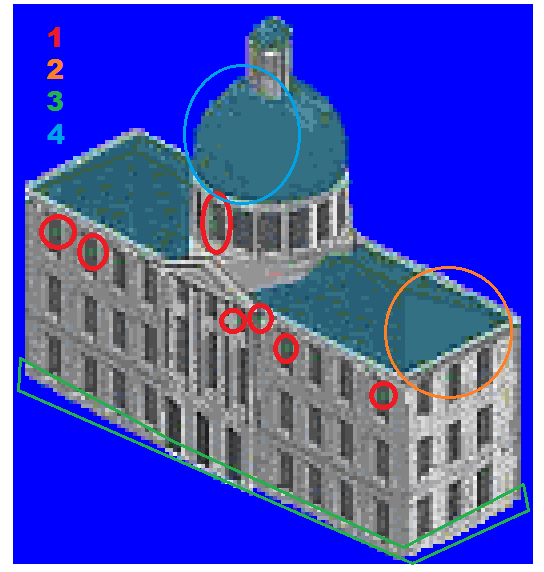 1. Strange greenish blobs. Probably caused by shrinking/reshaping. Very ugly, try to avoid those effects or correct them.
2. That sunny part of the roof could use some more texturing. Try to avoid drawing large single color areas.
3. The bottom should have straight lines, take a look at the green and yellow tiles in the right of your picture to see how straight lines are drawn in OpenTTD. By that I mean the general lines, the entrance in the middle should indeed poke out a bit, but also with a straight line at the bottom.
4. This is still a matter of opinion and taste and also depends on what views one has regarding the position of the sun in OpenTTD, but in my opinion, the dome should have a bit more shading in the general area of the blue circle. Difficult to explain, but a bit in the shape of a crescent moon, starting at the point on the left where the dome meets the building on top and ending at the bottom of the blue circle. The shadowline between those points then has a shape like this (so a curved line) I hope I explained it a bit what I mean 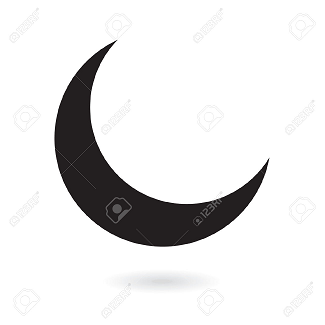 Furthermore, the lines between the walls and the roof have strange colors. It looks like the blueish color of the roof has mixed with the grey color of the wall (probably also caused by resizing/reshaping). That doesnt look that good to me, keep it the same color as the walls.

I think that for the TownWalls objects this building is too large right now. However, maybe when it is reshaped to a maximum of 2 tiles and maybe with just two floors it can be used as a townhall or bank. But it might be usefull in the shape it is in right now for other projects.

So, I hope you see this as positive criticism. I think you have a lot of potential with the drawing!!
And I also think it should be a good idea if you start your own topic in this forum where you present your artwork, that way others can also discuss and help with your artwork and all your work can be found in one spot. Makes it easier to find later on. And dont forget to state under what license you want your work to be under (maybe do that in the first post of your thread), so that maybe many years from now others can still use your work!
Projects: http://www.tt-forums.net/viewtopic.php?f=26&t=57266
Screenshots: http://www.tt-forums.net/viewtopic.php?f=47&t=56959
Scenario of The Netherlands: viewtopic.php?f=60&t=87604
Winner of the following screenshot competitions:
sep 2012, jan 2013, apr 2013, aug 2013, mar 2014, mar 2016, oct 2020
All my work is released under GPL-license (either V2 or V3), if not clearly stated otherwise.
Top

Thanx for the advices...have to learn much more I think.
First steps aren't the easiest.

Great job. Waiting for the next update set.

Worked on the windmills of FIRS , this is the result:
What do U think? 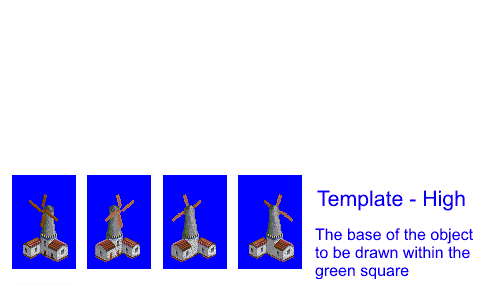 Timeflyer wrote:Thanx for the advices...have to learn much more I think.
First steps aren't the easiest.

No problem, it is a very good thing that you post your "work in progress", that way people can point out issues or give suggestions in an early stage.
Like I said before, I do think that you should make your own graphics development thread in the forum, because I think you probably will come up with more great graphics and ideas

And a little tip, as you are probably not able to code your graphics into the game yourself (yet

). Try putting your graphics into screenshots of the game, that way you can see if your graphics fit into ( and/or look good in) the OpenTTD environment and it will help you spot, for example, shading/texturing issues.


STD wrote:Great job. Waiting for the next update set.

Timeflyer wrote:Worked on the windmills of FIRS , this is the result:
What do U think?

Nice! For the backviews (the 2 graphics on the right) I think it would be better if these two houses are also on the same line as the windmillbase and the other house (hope you understand what I mean 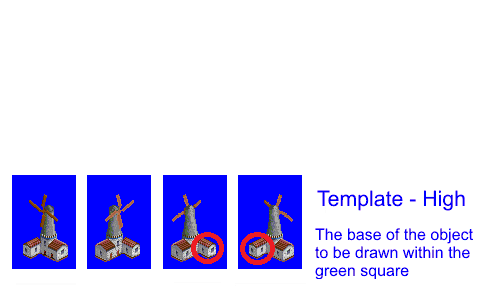 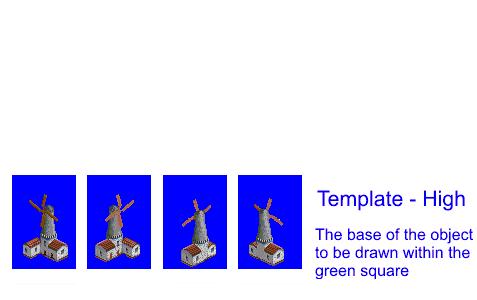 ok....what do U think abaout a door at backsides ? 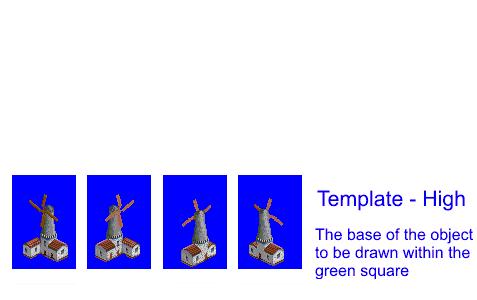 one thing that irritates me a little.... this leightgrey points over the basement (see on screen"lightgreypoints" red circled)

So .... I bettered up all my towers and changed these points in darker grey.

Last Tower is a new Idea

lonelytowerhighvar4.3.PNG
(27.02 KiB) Not downloaded yet

Timeflyer wrote:ok....what do U think abaout a door at backsides ?

Looks good!
Also I think it is better to make that narrow building longer, that way the backside view is a bit more interesting, like this:

Also, note that the roof should also be a bit longer towards the mill in the front view (as indicated by the arrow)


one thing that irritates me a little.... this leightgrey points over the basement (see on screen"lightgreypoints" red circled)

Well spotted, I will correct those too for all my walls and towers. Those are indeed irritating (once seen cant be unseen


Last Tower is a new Idea

Nice, however I dont think that 4 arches (in this case only 2 are visible, but I assume it has 2 others at the backside, that cant be seen from this perspective) were architectually possible at that time (structures were maybe not that strong at that time to hold up an entire tower over it). It doesnt feel strong enough to me

watching this WATCHTOWER borught me to a new Idea:

Well I am not a medieval architecture expert, but I think it sticks out too much

It will fall off

another ides would be a doublewalled