Been playing around with Canyon Walls .. have improved what you seen in pics previously. 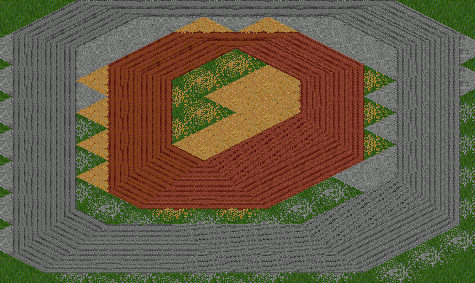 Also been seeing if can make angle rocks too in this pic you can see some of them.

When I make this available (hope before the end of the year) there be 4 sets of grey and 4 sets of red Canyon Walls.

I added some trees for something different. Trees curtesy of "planetmaker" and his many helpers of the OpenGFX+ Landscape

Not sure when I will put on Bananas as like to test it more and add some transition for some of the other landscape tiles.

Since Christmas I been having a play and adding to my scenario and found in the AuzFakeRailwayLines lots of errors. Almost all the railway lines running from North West to South East were 2 pixels out. They wasn't lining up with Main lines and the Fake Main Lines. I wonder how many other small errors I have in the other sets, so before I release any more on Bananas I going to continue game playing and scenario making and re-test what I have done to date.

Been fiddling with turntables and this is what I come up with.

The are both objects from the AusFakeRailwayLines NewGRF set.

The small turntable is designed from D. Erikson's Modular Locomotive Sheds with my Z18 steam loco being turned on one of them.
The large 75' turntable is my own design and it is turning a Beyer Garret designed by Coalroads_Artist.

Both turntables have set facing each direction empty and also a set with a steam locomotive on it.

If you want to give them a try heres the file.

Hope to place on Bananas in a few days time if I not find any errors.

The Object sets I been making are huge to what I ever thought they would be .. most of them have between 100 to 200 objects in them.

Quast65 suggested to me back in April 2016 about splitting them and have more NewGRF files, but back then I never thought the files will get so large and some getting side tracked and having objects in them not related to that set. For instance the Electrical Wires in Auz_Lineside_Objects.

Look back through the 55 pages of this forum there are some great suggestions that I haven’t had chance to do yet and some I cannot do because the sets I have done are too large to add more (For instance when I did the UK Fake roads, also like to do American roads too but no room left in the Auz_Roadside_Objects to make them).

So maybe the new GRFs could be like this:

So I think it time to start arranging things like this and give them all new names so the originals will still be available for those that are happy with them.

I been asked if I could do town sets for the game so if I separate the builds from the Auz_Roadside_Objects and the Auz_Lineside_Objects into their own Town Object set for now and once I get a good collection of buildings there see if I can use them to make an actual town and city set.

I have a bit of work to do to the originals first and release them on Bananas and hope very soon be able to start a new forum with the new sets.

Found some embankments I done months ago but forgot to add them to the Auz_Landscape_Objects until now.

I finished them off with some Sandstone_Blocks slope aware embankments and also some overlap ones so that trains can hog the cliff edges. 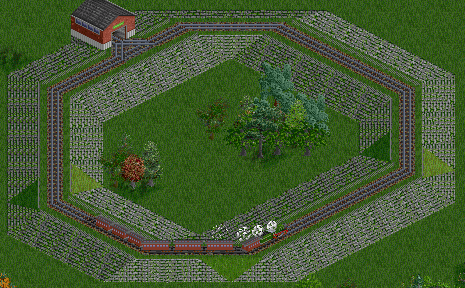 In the pic .. the green sections on the slopes there are no tiles in slope aware that can go here without blocking the flat area above and there for preventing the train or roads from going close to the edge, so I made some overlap tiles and these have been use in this pick to fill in some other areas.

The Sandstone Slope Aware also has 3 lots of grey stones (which I forgot to add to the set months ago) and these too have some overlaps in separate files.

This will be added to Bananas very soon.

This might be the last of Auz_landscape_Objects .. I hope to re-issue it later as mentioned above as a different name and most likely be called AuzObjects_Landscapes.

If you want the source files to this version here a copy.

It basically all the object sets that are here, but I am splitting them into several sections.

The sets here are almost full and not much room for adding much more.

So rather then making files with the Add-Ons extension to the names, I better off dividing the sets.

See the new forum for details.

Doing some work involving both AuzInd160 and the AuzObject Sets.

Making so the Railway Objects and Fake Rail Objects will match up with some of the Industries.

At the moment I making Gantry Cranes and Road Access.


If like to give it a test here's the file for AuzObjects_Rail which will be Version 3 when I release it on Bananas eventually.

There are 3 types Gantry Cranes so one of them should suit how you would like to use them. One is a Over lap set which will over lap roads and rails, one is a 2x1 tile set and other 1 tile with a slight overlap. These are found in AuzObjects_Rail: Rail Freight Facilities.

Still a bit of work to do to the Access Roads and a slight problem with some of the access roads when placed next to the fake 3 rail sets. 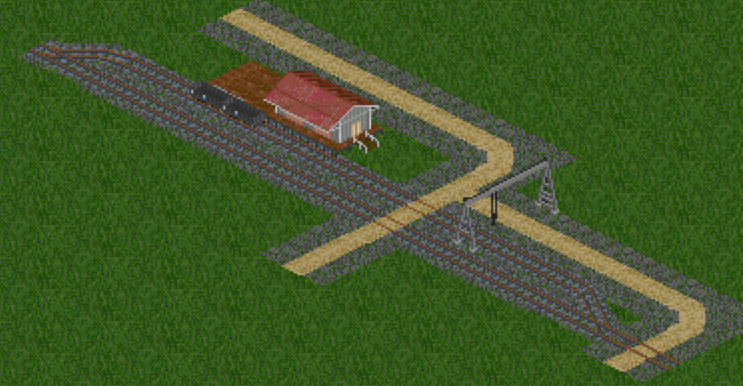 Thank you very much for the work done. Very beautiful

MERRY CHRISTMAS TO ALL.

Even if you don't believe in Santa or Christmas still hope you have a lovely day.

Just had a bit of fun with the AuzOjects_Towns.

Added Santa Clause in his sleigh being puled by Kangaroos.

In Australia in don't snow here and too hot for reindeers, so he uses big white kangaroos called Boomers. 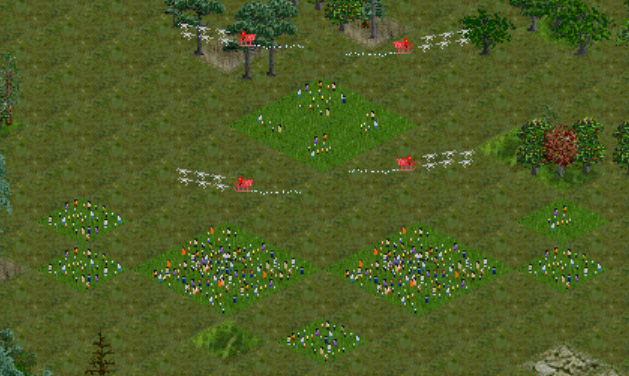 I added some more pieces to the town set such as the Santa, groups of people and a few fences for the parks.

This is same version as previous so just copy it overtop of what you already using.

I hope to add a few more things too it before I change the version and add to Bananas.

Adding a few items to the Object sets.

Been looking at screenshots from players who used my object sets and these gave me a few ideas.

The Fake Roads are bare with out any vehicles .. so I added a few.

When entering farms I had no gates to go with the Gravel and Dirt Roads .. so I added some Gates and Cattle Grids to those roads.

If changing from Gravel to Dirt and Dirt to Dirt Tracks the connections didn't look good so made some transition pieces to try improve on this.

Hope do some more later. 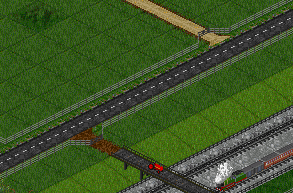 I getting mixed up where I show the object sets as got 2 forums.

I will try and keep all new additions over on AuzObjects located at.