Your welcome .. be several months or more before I try working on the industrial set again and add extra cargos.

I need to finish off some of my other projects first.

In case your wondering what happening with the Industry set.

Although I could start on new one now, I making myself wait till official release of the new NML version.

This to give me time to finish on other projects and start planning what I hope to do with the Industry Set.

Many of my previous Industries based on what I stole from FIRS 1.4.3 and SPI Industries as I wasn't much good at making my own.

Well, NML 0.5.0 now been released, but still be a while before I start doing anything with my Industrial set . like to finish off some of my other projects first.

In the mean time I hope to make up a list of Industries and cargoes I hope to include.

I doubt that I will ever make any Industries that handle 16 cargoes .. Many probably only be accepting the 3 and produce the 2 maybe a few more.

The Bulk Terminals for importing and exporting will be the main ones to handle lots of cargos.

Almost every Industry could produce their normal cargo as well as GOODS (GOOD) and my favorite PARCELS (PCL_).

When I worked on railways some of the things be sent as parcels on trains from the station I worked at called Broadmeadow in the 1970s were: Motor Bikes, car parts (everything except the car itself) , dogs and other small animals, fish (dead and alive), shrimp (prawns), oysters, processed meats, flowers, anything that could fit in the parcel van on passenger trains. The reason I did that list is that any Industries that I add I hope to make Parcels as one of the cargo they produce. For instance .. fish farm will produce FISH and also Parcels. The Abattoirs would produce MEAT, Processed Meats and Parcel.

So basically any Industry they would produce Bulk Cargo that requires trains and truck loads to carry, but also smaller amount of cargo such as the humble Parcel .

I found a very minor but annoying issue with AuzInd9. 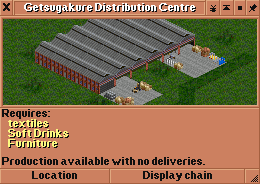 As you can see, the industries list "textiles" instead of "Textiles". The same happens in the vehicle-sorting menu.

Thanks, sorry to bother you with something so minor!
Top

Can't fix that error at the moment as the source to that set is in Australia and I stuck in Philippines at the moment. If what I hear on the news for both countries could be end of August or later before I can return home.