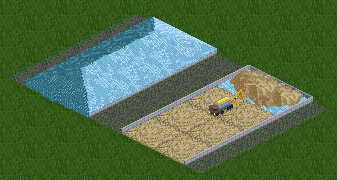 The blue is tarpaulins they place on the ground to put the grain on and cover the grain with the traps.

These storage can hold around 50,000 tonnes of grain.

I also made some object ones 3x1 tile size as well as some with trucks on them. 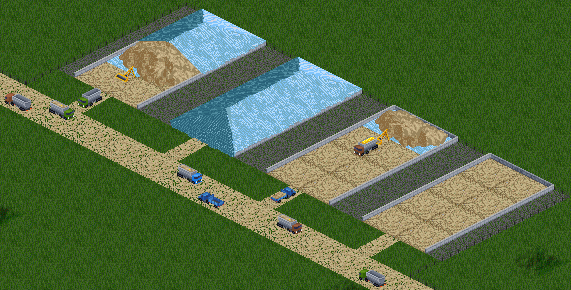 still got some work to do to these so not be available for you to try just yet.

One idea I have is instead of farms producing Cereal Crops and Grain Crops .. they all produce Grain. This can represent all grains such as Maize (Corn), Wheat, Oats, Barley and others.

You take the grain to the Grain Silos, Grain Bulk storage or the Grain Temporary Storage. These places produce the individual types of grain to be taken to other Industries where required.

They can also produce Grain Seed to be taken back to the farms to grow more crops.

Made 2 more Industries .. both Commercial Businesses.

This one accepts Furniture, Textiles and Flour and produces Marine Supplies and Farm Supplies. Main idea of those cargoes for now that they are all new cargo types. 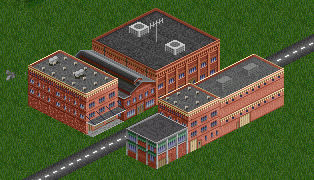 This one when I am able to code the Industries to accept more then 3 cargoes and produce more then 2, it will replace many of the shop Industries. 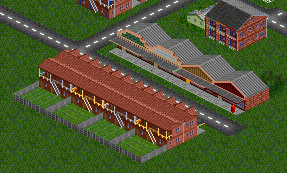 They both build close to towns.

With the introduction of the Grain Temporary storage, I added SEED to the Cargoes.

All Farms that was producing Cereal Crops or Grain Crops now produce GRAIN and Accept Plant Seeds (so they can grow more crops).

Can obtain the Plant seeds from those 3 places or from the Bulk Grain Terminal (Used to be Bulk Terminal A).

The Bulk Grain Terminal (Used to be Bulk Terminal A) accepts Cereal, Corn (Maize) and Wheat and produces Plant Seed and Grain.

I don't plan to do any more coding this weekend .. I think some play time is in order.

If you like to play as well, here is auzInd9 with those new Industries and changes to cargoes.

New version of AuzInd9 to one I put here just a short time ago .. I just forgot to change some of the messages to the Grain silos and some other Industries

Wool storage sheds - On one side is an overlap of about 2 squares, seemingly empty, but it can not be built
Top

Argus wrote:Wool storage sheds - On one side is an overlap of about 2 squares, seemingly empty, but it can not be built

Thanks for the report .. shall have a look at that later today.

I played around with it last night for a while seeing what can be improved.

I think I could remove the Fast Food as seemed funny it producing so much food. It was producing 70 tons. Can you imagine all those hamburgers.

What about a normal restaurant instead?
Top

Argus wrote:What about a normal restaurant instead?

Maybe if I put some shops next to it and make it a 4x2 size tile might look better producing food.

Seems funny taking a train load of food away from a Restaurant or a Fast Food.

I been running the game last night and today .. I played the game for 20 years last night and just 1 Industry closed and many industries were constructed during that time.

Wouldn't restaurants and fast food places be food sinks, not food producers? You'd
only deliver ingredients to them - the food leaves inside the customers, one customer at a
time. And given that the cargo volumes are so high, you would probably have a wholesaler,
market or maybe a caterers as the delivery target, rather than individual restaurants.

For example, almost all cheap Chinese takeaway food in the UK is produced in one or a couple of
factories. That's why so many Chineses have the same menus. In OTTD terms, we'd deliver
food to the factory, which would be a food sink, and its vehicles would deliver to the
individual restaurants. That final delivery stage is out of scope for OTTD, I'd have thought.
Top

Yep that what I thinking too.

The Restaurant or Fast Food on its own I think it waste of resources. Silly that it produces FOOD and silly if it accepts lots of stuff and not produce anything as well.

So making the Restaurant or Fast Food with several other shops like I did with the Commercial Industries is the go.

I fixed the Woolshed problem .. I just can't count the number of squares. I coded for a 6x6 tile set instead of a 6x4.

Also changed some graphic settings to some farms. I separated them a bit so not so cluttered and also look a bit better if on any slopes.

Hope tomorrow or when get chance I will re-do the Fast Food and add a building next to it. The Fast Food can still accept the ingredients and the other building can produce things. Any suggestions what type of building it could be and what it could produce?

I've uncluttered the farms so the buildings are spread out a bit over a 5x5 area.
(Dairy Farm on Left and agriculture on right)

I now wonder what other Industries I could split in half so a road or rail spur line could go down the middle.

Here the update to AuzInd9.

It has the problem with WoolShed fixed and the changed position of buildings in the farms. The Fast Foods still there for now.

I intend to test these for a while with the OpenTTD 1.9.0 Beta 1 and Beta 2 that has been released and if no problems found see what else I can do with them.

I have this set still not try to use in the game. First you need to understand the production chains. Quite a lot of different structures compared to the same FIRS. But it certainly adds a huge plus to this set. I've only checked it in the scenario editor so far. But in any case, thank you very much for the work done

. Everything looks very cool and beautiful

STD wrote:I have this set still not try to use in the game. First you need to understand the production chains. Quite a lot of different structures compared to the same FIRS. But it certainly adds a huge plus to this set. I've only checked it in the scenario editor so far. But in any case, thank you very much for the work done . Everything looks very cool and beautiful !

I would not worry too much about keeping this AuzInd9 as it just a test t see how it handles extra cargoes and to see if all the bugs are gone from the coding.

The cargo chain I did was only a rough one to get ideas on what a person could make.

Now comes the fun part .. to design it all properly. As mentioned before I like to make 3 sets that can be used together or individually something like the ECS Industry set.

It'll probably take me weeks or more to design it.

But at least AuzInd9 will be fun for those who like the extra cargoes and AuzInd10 for just 32 cargoes.

Been experimenting to see if I can get RVs and trains to go inside a Industry to load and unload.

This is a 4x4 size Industry with a train passing through it. In side the Industry I placed a platform to get the train to stop there. 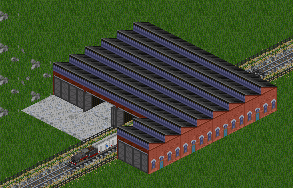 And this a 6x6 Industry has trucks going in one door and out the other.
They can also drive through and out the back if like as well. Inside the road does a loop at far end and on one of the roads is a truck loading bay. 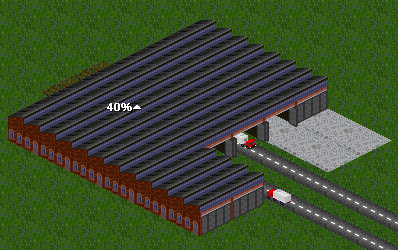 The doors did glitch at first so I re-designed them so have bigger doors that don't look odd. So made some concertina doors where they slide back to the ends when open.

I changed the graphics in AuzInd9 so that the Cold Storage is the 4x4 and Distribution Centre is the 6x6.

This is amazing. I've seen this done with objects but not industries. great work! This opens up many more possibilities.
Top

This is amazing. I've seen this done with objects but not industries. great work! This opens up many more possibilities.

It is going to put thinking caps on to see what other Industries could have this idea included in the design.

Doing overlaps with Industries are technically not overlaps. It really is the building being made to look taller and every thing hides behind it.

In this image for instance. The building is the actual Industry.

The 2 yellow squares can be where you make the roof of the fake buildings but they are actually part of the main building.

The green lines up each side is the boundary how wide the fake sections can be and can be as tall as you like.

Here the source if any one like to use it.

Looks like I be experimenting a lot with the overlaps in Industries.

Had a go at doing some Coal Mines. 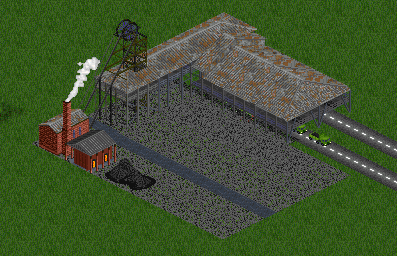 Loading Trains: I used the mining platforms from one of my station sets for the platforms. ISR/DWE also has some platforms that can be used. 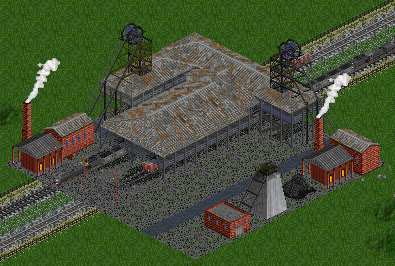 As you can see there are no buildings in front of where the RVs and Trains load.
Those were made from these sprites.

Great job! I really like what you're doing with Auztralian Industries. Looks very beautiful

STD wrote:Great job! I really like what you're doing with Auztralian Industries. Looks very beautiful .

Making the overlaps gives the Industry another way of playing them, but does have one problem.

You could end up with a split level Industry. Ending up on 2 levels like in these pics.

I think the Coal mine idea with the overlap at far end (NE Edge) best idea as you can level the land under the over lap.
Like this: 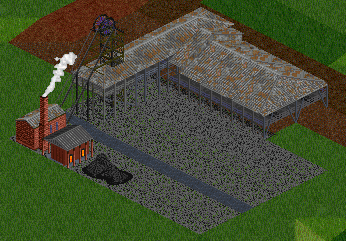 But unfortunately you can not do this with the other image as the overlaps are in the middle.
Could end up with something like this: Can see the road goes up a level. 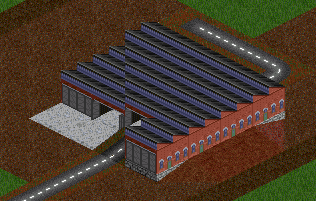 NFO:
Land shape flags (0D)
This property defines which slopes the tile can be built on.
Bit 4 Value 10
Can only be built on flat land
https://newgrf-specs.tt-wiki.net/wiki/A ... stry_Tiles

Users browsing this forum: No registered users and 25 guests