NekoMaster wrote:I know you make australian stuff but this is one example of a hirail truck in Canada

I seen very similar to this here in my country too.

The first Hi-Rails here was Suzuki 4 wheel drives painted red but have no photos of any as yet.

by ASide8
Hello everyone,

Just thought I might let you all know that Garry and I have a (hopefully!) Christmas surprise for you in the works. I've done a good deal of work on it and I think Garry should have it finished soon.

by GarryG
Been train riding today getting more photos of Locos and track machines.

Visited Cardiff, Teralba, Awaba, back to Teralba, Booragul, Kotara and back to Cardiff.

This one almost sneaked past me while at Teralba.

Track Inspection Vehicle which I hope to make a eye candy version of this eventually.
This x-ray the track as it travelling along looking for fatigue in the railway lines.

Also got lots of photos of a Speno sitting in the siding at Awaba.
I took lots of photos of this one of each individual part. Not sure if I can make a working model of it for the game, but I going to try.
It is used to align the track and tamper the ballast.

There was also a nice variety of locos hauling Coal and Container trains.
These SSR locos was on a coal train passing through Cardiff. 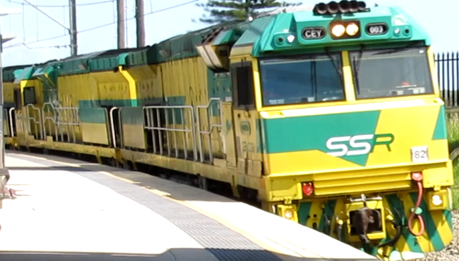 ASide8 wrote:Hello everyone,Just thought I might let you all know that Garry and I have a (hopefully!) Christmas surprise for you in the works. I've done a good deal of work on it and I think Garry should have it finished soon.

Aside having a go at drawing some locos for the sets and I code them in when he finished.

He did a Z26 Tank Loco recently which entered service in 1892. Its under tests and if all is well will have a update here soon.

Something I like to try and do .. my train sets originally designed off the 2CCTS sets where they have different Generations of Wagons and Coaches, Gen1, Gen2, Gen3, Gen4 and Gen5. I hope to remove the Generations since I have the actual years (and in some cases the actual Month and day) that locos, wagons, coaches, etc had actually entered service. Aside as helped me heaps on obtaining that information.

by GarryG
A few more hours and Santa be starting his deliveries .. I don't have much time to start being good and hope he visits me tonight.

May I wish you all

a very wonderful Christmas and hope you have a lovely and jolly day.

Have you heard the Australian groups The Seekers singing the song MorningTown Ride.

Lovely Christmas song for the kids and adults too.

CHRISTMAS CHEERS TO ALL

by GarryG
For list of the latest versions of my Projects go to:
Auz Project Releases
viewtopic.php?f=67&t=84725

Of the Train sets version 29 is the latest version on Bananas,

However these are Versions 30 which I'm still working on so be some time before they be officially released on Bananas.

AuzTrainsNSW .. has trains that operate in the State of New South Wales Australia .. last work on Dec 14, 2018

AuzCandyRailVehicles .. have 2 Road Vehicles that go on rail .. they just Eye Candy and have no official function except check your railway lines for faults and annoy the running of trains.
Last updated Nov 1, 2018

You will find many Locos and rolling stock cheaper to purchase in these sets.

by GarryG
Finally playing around with my trains.

A lot of changes made in the coding and names of files.

Coaches and Wagons given their correct names in the coding and the .png graphic files.

The words "-Australia_" and "_Austrailan_" removed from coding for each of the rollingstock in coding and graphic files.

Repairs made to some of the rollingstock.

I plan to only work with rollingstock and locomotives that operated in the State of New South Wales. If you like to try make some for other States of Australia I am more then happy to send you what I have done to date and your welcome to continue with it.

I really like to make my trains longer a lot like the USSR Set. Back in March 2018 I contacted "Simozzz" from "xUSSR Set" to see if I can use their sources and he kindly gave me permission. It going to be a long and slow process, but hope to start on in very soon.

In the mean time here the source to AuzTrainsNSW and AuzTrains. 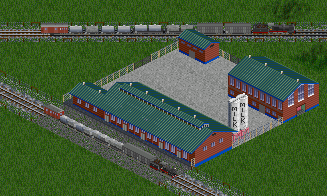 3 Types: KK 4-wheel tanker, BMF Bogie tanker and a MLK louvred Van which tanks inside them.

Also did some bogie open wagons: GM, BDL and a BDX.


BDL and BDX basically the same except the BDX is allowed to go interstate. Where other state different guage they could exchange the bogies.

by GarryG
Been playing around with the templates for rollingstock.

When trains ran in some directions many of the wagons looked like they was joined.

The closest train in this angle image is from my AuzTrainsNSW and the red one is a test train I been working on with templates for Flat, Open and Covered wagons. 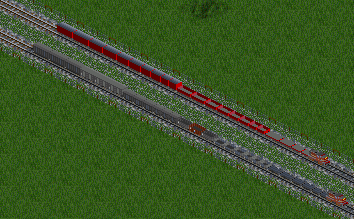 This image the one on left is from train set and on right is the test train.

Here the source and game file including the templates if any one like to see what I am up to.

Any opinions please let me know.

by GarryG
If you just like to try the test train set here the game file.

by GarryG
Still working on test set for my trains.

The coding and templates for vehicle size 9 to 16 are from the xussr set version xussr-0.5. Mush credit goes to those involved making that set and a lot of my work is based on that set. Thanks kindly.

The test set I making has sizes 4 to 16 as show here. (The white dots of some roofs basically for me to know which section of the carriage it has decided to use. If you look at the templates you will see what I mean).

The sizes 9 to 16 have a unique coding and templates where it attached a different vehicle at the end of the train consist. I hope to eventually recode the sizes 4 to 8 to do similar.

My plan for that idea is to make the end vehicle a baggage Van or a carriage with guards compartment.

In tend to make templates for a variety of freight wagons too.

Here the source and game file if like to have a look.

by GarryG
Much credit and thanks to the makers of the xussr set once again.

Love where you have the baggage cars open the doors when stopped at a station, so I had a go see if can do same with the passenger carriages. 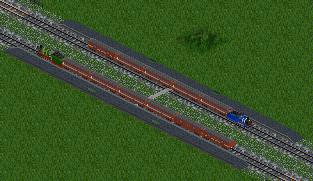 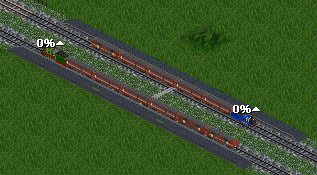 The passenger carriage is a FS non-airconditioned car that was used on country trains such as the mail train.

Getting these templates made has also shown me so of my steam locos are also our of alignment. Creating a lot of work for me.

Source files be made available soon.

by GarryG
Here the source to what I did so far.

The coding needs some tweaking as there is some coding possibly not required, especially in the lng file.

by GarryG
Hi again, I've recoded sizes 9 to 16 so that they not only add a end carriage, but they all will animate when stopped at a station.

For now they just change colours.

But there are 2 carriages I made that actually open the doors.

Now I hope to start making my new train set using code and templates from this test set.

Eventally I will add to these long freight wagons.

If you use any of these templates and coding please also show credit to those who made the "2cc Trains In NML" and "xUSSR Railway Set v0.5" sets.

by GarryG
Started on my new train set with long carriages.

Baggage Van MHO which randomly gives you a LHO. And a PHS Power Van that goes with the SFS and SBS carriages.

Added a novelty to the baggage and power vans. When stopped at platforms the loading lights come on.

This show one train with the airconditioned carriages and PHS stopped at station. Doors have opened and loading light is on. The other trains with BS, FS and MHO still arriving at station.

This shows both trains stopped with doors opened and light on.

The building to left is the depot extensions I been making for east-west directions. The actual depot is hiding behind these.

by Quast65
Just a health and safety remark, but isnt it a bit dangerous for passengerdoors to be open on the non-platform side?

Quast65 wrote: Just a health and safety remark, but isnt it a bit dangerous for passengerdoors to be open on the non-platform side?

I thought the wide gaps between the 2 tracks in OpenTTD would make it a bit safer.

by GarryG
Did several coaches and baggage vans for the new train set now.

The Newcastle Flyer.png
(11.29 KiB) Not downloaded yet

The HUB set most famous for use on The Newcastle Flyer that ran between Newcastle and Sydney.

Here the game file and resource if interested to try. The locos, EMU, DMU are all from the original set I did still in sizes 4 to 8. Eventually these will be changed if need. I think the 38 class steam loco with the HUB set looks a good size, so some other steam locos might be ok as they are.

EDIT: Forgot to mention .. the FS and BS carriages will add a baggage car to end of train. But just realised .. the idea was good, but cannot change the baggage van cargo to take mail or any other freight. So back to the drawing board for that idea.

Quast65 wrote:Just a health and safety remark, but isnt it a bit dangerous for passengerdoors to be open on the non-platform side?

That gives me a idea

.. what if I put a guard at the door to keep watch and see how many idiots will detrain from the wrong side.

Also gives me a idea for some more platforms .. animated platform when a train comes the station master could stand on the platform with a flag and may e on another platform me trolley with luggage, mail and parcels.

When no train at platform the station master have no flag and trolley be empty.

by GarryG
Slowly adding to the new train set.

Bit hard to do all I want as don't have access to a lot of my work at the moment.

This model of the North Coast Mail that ran between Sydney and South Grafton (now known as Grafton City).

The 44 class loco is from the original train set. I've yet to start the new graphics for locomotives. It is size 8 and needs to be size 13.

The consist from the front is 3 x LLV Louvred Vans full of mail and parcels. TAM Sleeping Car, BS First class compartment carriage, 3 x FS second class compartment carriages, KP (Traveling Post Office), KB (with Mail), MHO Guards van for parcels and luggage and at the rear is a EHO also with parcels and luggage where the baggage porter travelled. I often worked as baggage porter on this train from Broadmeadow to Kempsey. Stay in barracks at Kempsey during the day and then worked on this train back to Broadmeadow the next night.

Still some minor work to do to some of those carriages and others I done. But it will have to wait till I get access to my stuff again which I hope will be in a weeks time when I return to Australia.
All times are UTC
Page 20 of 21
Powered by phpBB © 2000-2020 phpBB Limited