I liked the earlier pantograph better, with the contact strips more visible.
Top

Me too, I actually went ahead and "chibbyized" the thing. Render preview coming soon.

Hey V! Hasn't been an update in a while; how are things going?
Top

Thank you for asking, I have been a bit less active, but did small progress pretty much every day.

Since I last posted the pantographs v2, I made a better version which is a lot clearer, and in general adjusted the model a lot to make it much more "visible how it is constructed".

I also started to mess around with pointiness in blender (detects sharp edges and applies bright material to them), which I find super handy to demonstrate the shapes better and make them even clearer. However, this functionality is utter hell to do in 3DS MAX, and almost impossible to do without plugins which I don't want to use.

I find the pointiness very nice and fitting for BRIX. I don't really want to paint the textures right now because it requires extra UV unwrapping of all the models, and then the hand painting, which would take a lot more time, and it's a good idea to do this only when I am very sure that those are the final models. So I will perhaps do that later for some really-beautiful sprites, for some later version of BRIX. But for now, I like how it just highlights the edges and thus makes the shape more readable.

Which led me to big testing and considering which application should I then use. I settled with blender. Yesterday I was setting up lighting to be similar so that things fit. I am not quite there yet, but soon (tm) I will have the SH40 finished. I probably won't touch the model anymore, unless I find something needs changing.

And then there is s*** like blender being unable to render the shadow with alpha, so I need to set up a special system for it. I already know how, just need to do it.

This SH40 model is very important because it sets the rules for many of the rail vehicles, so making them should be much faster now. Also, I will set up the rendering/lighting stuff in blender just once, and use it for all other vehicles so that will help, too.

To show something else than words, here be pictures

Thank you for your interest 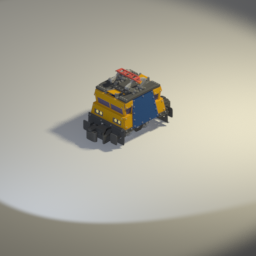 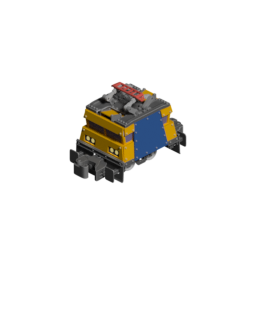 more or less initial lighting setup. I actually like the contrast there a lot more so I will probably revert to this more or less
test-sh40-LET-THERE-BE-LIGHT.png (23.05 KiB) Viewed 3951 times

Hey V! Its been a long time since we've from you. Everything alright?
Top

Also hoping things are alright. All the most recent updates since I last looked are awesome btw.
Top

Hey guys, thanks for asking, things are alright, just super busy with Factorio and life in general... I did a little bit on the train models here and there, and in subway I often sketch designs for engines/wagons. In fact, I have almost all engines sketched at least in some basic idea/shape, and wagons as well. I just need to sit down and do the 3D models.

In fact I was even considering buying a tablet and a wacom pen, and trying to just draw the sprites directly, but it's probably not worth it...

I am hoping to put more time into this relatively soon, let's see if I can manage to!

Thanks for your interest, it is very motivating to see that people still care about it

Glad to hear everything is alright. Can't wait to see more progress!

V453000 :) wrote:Hey guys, thanks for asking, things are alright, just super busy with Factorio and life in general... I did a little bit on the train models here and there, and in subway I often sketch designs for engines/wagons. In fact, I have almost all engines sketched at least in some basic idea/shape, and wagons as well. I just need to sit down and do the 3D models.

In fact I was even considering buying a tablet and a wacom pen, and trying to just draw the sprites directly, but it's probably not worth it...

I am hoping to put more time into this relatively soon, let's see if I can manage to!

Thanks for your interest, it is very motivating to see that people still care about it

Well a wacom tablet like the bamboo tablets are anywhere from 50-80 bucks if you live in North America. I'd say they get the job done.

Since I got pretty much everything sketched, I have started modelling the AsiaStar. I already have the basic shape done, just extra details and next engine soon.

Bamboo is nice but using that on a subway isn't great. I was more thinking about a portable tablet device, I thought you can use the wacom pen on those. Never seen it though.

I have been talking to some people and I find it completely reasonable to release BRIX 0.0.1 now, IF I can get the 8bpp sprites to work at least somewhat well.

From what I tried so far was:

- Put the 32bpp image in photoshop
- draw alpha blue or white background under it
- convert to 8bpp-noact-no1cc palette to not include any active colours
- and finally convert to 8bpp palette.

This works flawlessly for things which don't use anti-aliasing because their edges are manually cut with a hard mask - terrain, foundations. But it ends there.

Anything that is a pure render (which would have looked terrible without AA), and always has some transparency, breaks utterly. In the half-alpha parts the "alpha blue or white background" influences the transparency and it just looks bad.

At the same time it would be amazing to be able to make this script also handle the conversion to 8bpp.

Has anybody ever written such a thing which would do this kind of conversion?

I am assuming it would somehow need to get the RGB of a pixel, and assign the index which is "closest" ... I suppose I could get these values by writing another script which would somehow magically give me at least some ranges for indexes to be able to assign them nicely.

Awesome part of this is that I could easily edit and change these ranges, so if I suddenly feel like some green is getting values I don't like, I can just change the numbers a bit, or for example alpha in the image could make the colour just have a different shade so it doesn't look so broken. Perhaps it won't look amazing like hand-drawn, but not broken.

Apart from that, here is a very early preview of the AsiaStar model. There are many things to be added and finished, for example the pantograph won't be screwed to the glass, there will be more details, the rear is basically not done at all, ...

but here you go 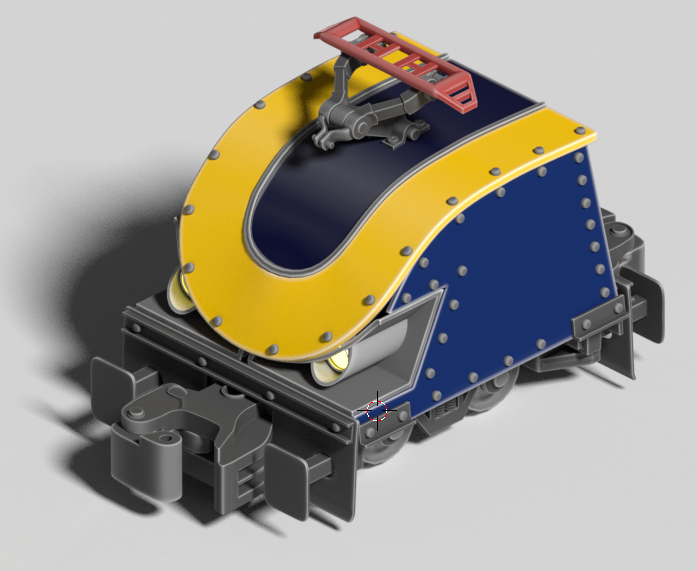 AsiaStar looks amazing! I didn't even notice the panto was on the 'glass' until you mentioned it...

rough shapes of candidate for T.I.M. 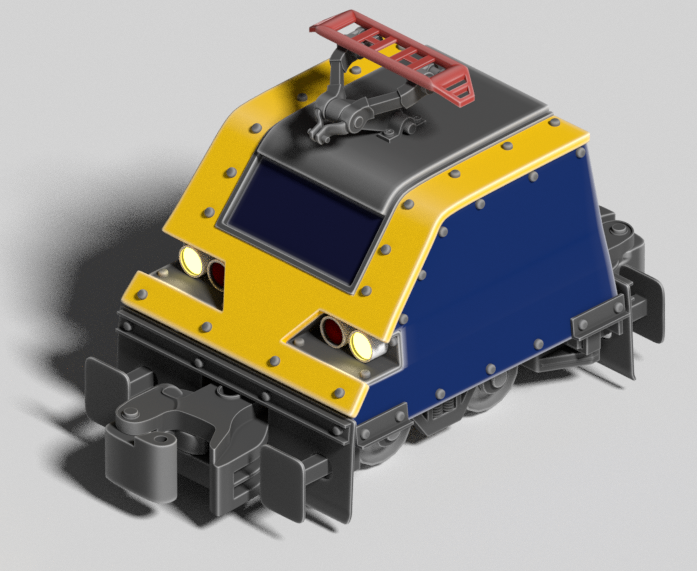 Stopping by to wish you a Merry Christmas. The trains are looking great btw.
Top

heyo, that is very nice from you

in the meantime...
I have been busy as all hell, and BRIX got a bit of attention as well. I have hade more models for wagons and engines, but they aren't ready for showing yet.
Also, I have gotten myself a new wacom tablet with display (Mobile Studio Pro if anone is interested), main purpose is for work but one of the first things I tried with it was some hand-painted BRIX postproduction. 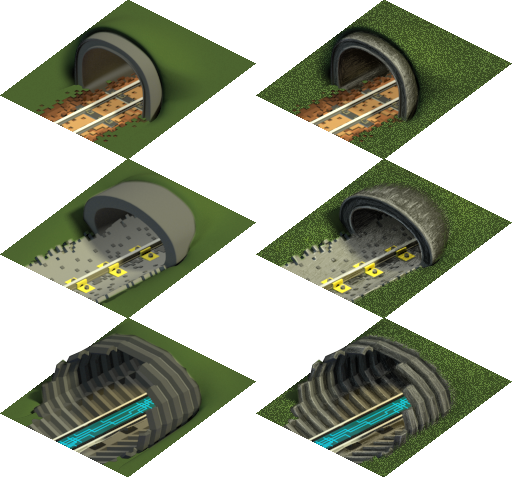 
Let's be honest, the way how BRIX looks is far from great. Especially when I compare it to the original TTD graphics, the vibrant noise which was in the old resolution mimicing details, and making it not so ultra clean. When playing with BRIX, I discovered that the super clean look forward gets boring fast, hurts your eyes in the long term. What doesn't help the situation either is that when we have totally clean sprites, everything has to work physically well, otherwise some lighting stops making sense, shadows start doing really weird things here and there, etc. The issue is that almost nothing in OpenTTD is possible to do that way. Therefore extra noise and imperfections are ideal solution to help hide these poor spots. It's of course not just that. For example BRIX lacks contrast and detail in many sprites like train tunnels - you can see how much of both thse things is added by the extra postproduction'

Overall the purpose is:

- more organic, less sterile look
- hiding problems is easier
- more contrast and stuff
- to make BRIX look great but keep tileability where necessary (this is taken care of just by some tricks in After Effects)
- to spend extra time to make BRIX look nice, even when I am not at my desktop PC and couldn't progress on 3D models

There is a lot more to talk about, but I think this is enough for now. If something catches your interest in particular, just ask

I have a lot to go through and test.

Astonishing stuff is happening here, great to see how comprehevensively you are taking this on

Wow those tunnels look so much nicer with adding noise.