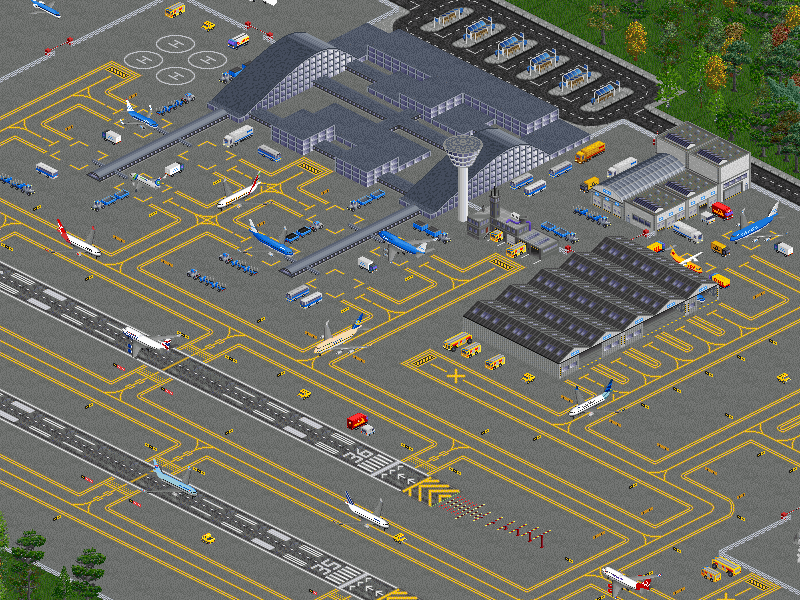 The GRF can be found on the ingame downloader (Bananas)

And finally the Simuscape Community for their remarks and suggestions during the initial development of this project: http://www.simuscape.net

If I have forgotten someone, my apologies, please contact me and you will be added: http://www.tt-forums.net/memberlist.php ... le&u=57156

GPL requires you to compile the actual source, not a decompiled grf.
Being a retired OpenTTD developer does not mean I know what I am doing.
Top

It is the actual source.
This is the NFO I used to code the GRF.
The header of the NFO may confuse you, but I am not really sure what can be deleted without screwing up the codingprocess. So I just keep it all in

Also, just check the NFO with the PNG. A decompiled GRF will not give you the PNG like I have attached (with my workspace/try outs in it). The location of the sprites described in the NFO will be consistend with the location of the sprites in the PNG. Therefor the NFO is the actual source.
Projects: http://www.tt-forums.net/viewtopic.php?f=26&t=57266
Screenshots: http://www.tt-forums.net/viewtopic.php?f=47&t=56959
Scenario of The Netherlands: viewtopic.php?f=60&t=87604
Winner of the following screenshot competitions:
sep 2012, jan 2013, apr 2013, aug 2013, mar 2014, mar 2016, oct 2020
All my work is released under GPL-license (either V2 or V3), if not clearly stated otherwise.
Top

amazing. Thank you so much for this.
You're awesome

First thing what came into notice!
Ill miss some lamp posts! Use the one below for example! Also maybe some helicopters for the aprons...
So far I like it!

Great job! I look forward to using it in the future! And big props on doing it "old school" via NFO! I'm certain that wasn't easy.

One thing I just noticed, is it me or does RSpeed's air tower roof look like the Reddit mascot has been carefully hidden?

I can't help feeling that the yellow lines are too thick. I love the concept but they are just too bright and prominent.

@ISA-1, Nice lamppost, is that your creation and if so, could I use it? Regarding helicopters, I havent really looked into that. I have to check if there is a set that has them under GPL-license.

@Skiddlow, nice to see the GRF in use!

@Ameecher, It was very difficult to get a nice tone of yellow using the colors available in my palette. I have experimented a lot with that and this was in my opinion the best I could make. Other tones were either too bright (or very pale yellow) or became more orange. Regarding thickness, that is also caused by some darker colors next to the actual yellow lines. Using only the yellow lines makes them really stick out and sharp, if you look carefully at how lines are drawn in the OpenTTD universe you will see that they are a bit blurred (for example look closely at the white lines of the normal airports) by adding some darker toned colors next to the lines. Using this method has the effect of making lines thicker, but it does actually fit in better with other graphics.
This picture could illustrate it a bit: 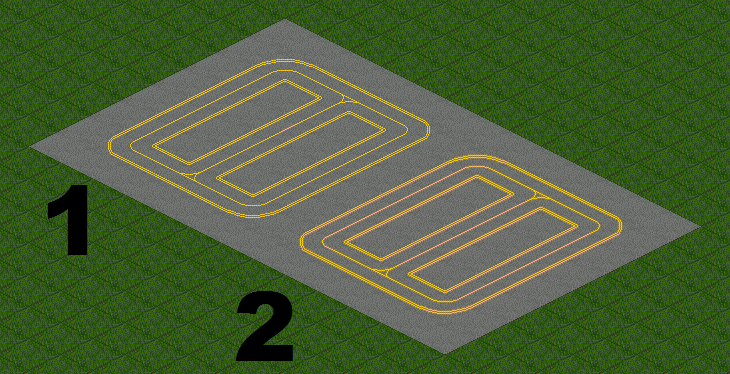 1 is without the blurring, 2 with blurring. The yellow lines are exactly the same, but 2 has extra colors on the edges of the yellow lines.
Still, if you could think up a better solution, I will be very open to that.

@ISA-2, I am not able to code Multi-tile animated objects, dont have the knowledge. So I used the watercycle colors, in my opinion they gave the same effect without having to learn extra codingskills (and therefor having to write a lot of extra code) and also having to draw a lot of graphics (animating tiles means A LOT of extra drawing

) Using watercycle colors does mean that the lights gradually light up and that could give the effect in a paused game that more than one pole is lit. However I dont see that one perticular pole is always lit, in my experience the sequence runs from the first pole (highest) to the last (lowest) as it should. Could you elaborate more, maybe with a screenshot?
Projects: http://www.tt-forums.net/viewtopic.php?f=26&t=57266
Screenshots: http://www.tt-forums.net/viewtopic.php?f=47&t=56959
Scenario of The Netherlands: viewtopic.php?f=60&t=87604
Winner of the following screenshot competitions:
sep 2012, jan 2013, apr 2013, aug 2013, mar 2014, mar 2016, oct 2020
All my work is released under GPL-license (either V2 or V3), if not clearly stated otherwise.
Top

1.Yes that's my lamppost from here. Use and make changes what You need.

2. Look at the picture I made green circle around the post what I was talking about. I let the game run, build all views and I didn't saw any animation what so ever. As I try to be as understandable as I can be I hope we talk about the same thing here 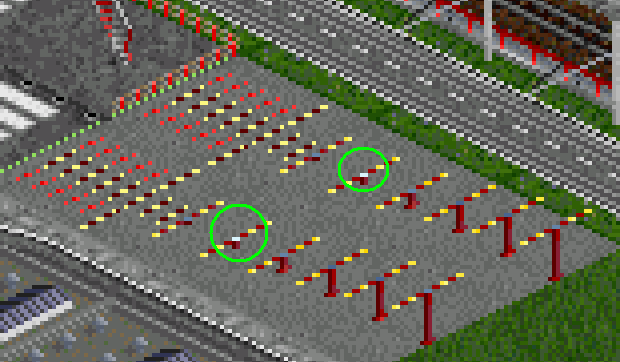 Aha, I see the problem.
Make sure you have turned "Full Animation" ON in the game options menu: 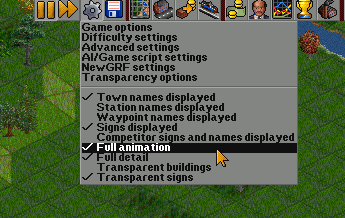 I think the narrow lines are far superior, in reality the taxi way markings are pretty narrow, no more than 30 cm wide I'd say.

We need a poll 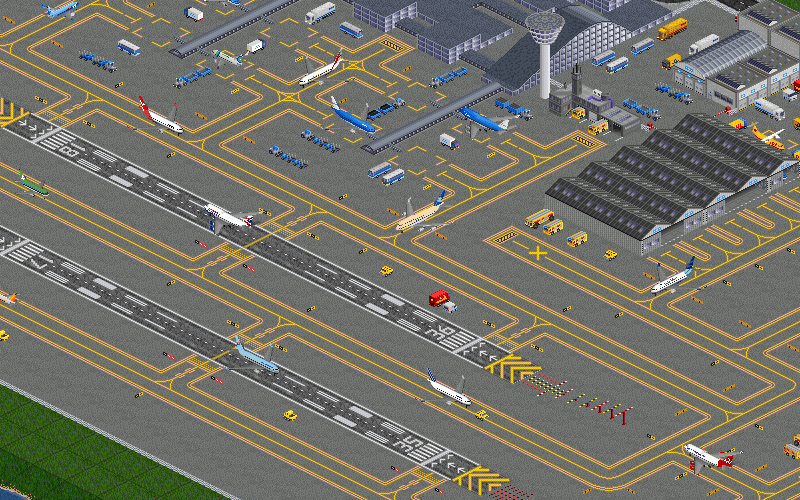 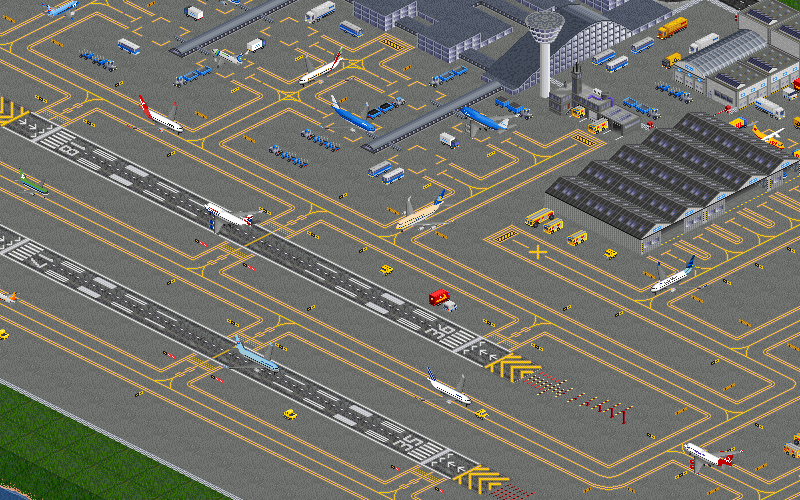 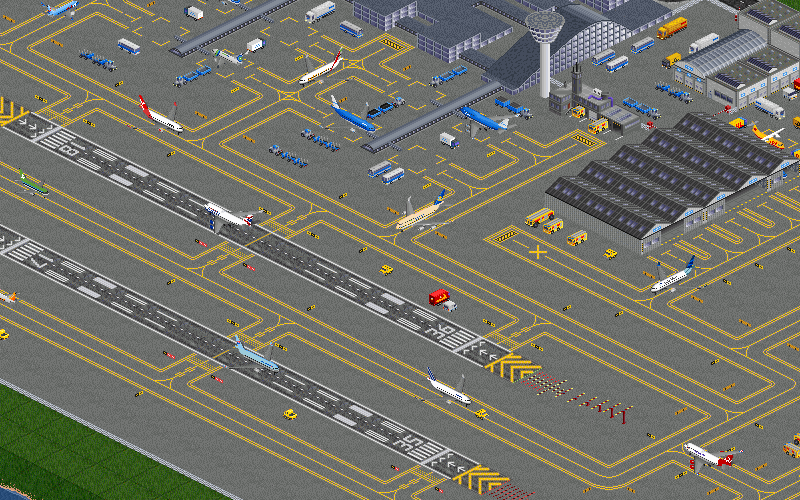 wow very good these objects !! if these tracks could be used with the normal game would be a great goal. you imagine?
Top

I downloaded the NewGRF from the Online content in the game, added it to the list of newGRFs I wanted in my game, but in the game there were still the original airports and nothing else, is it somewhere else or do I have to download it from any site on the internet?

savegames have their own set of newgrfs and that cannot be changed as player. If you load a game, it uses its own set, and not the set of the title screen

To use the set newgrfs you created from the title screen, you have to start a new game
Being a retired OpenTTD developer does not mean I know what I am doing.
Top
Post Reply
41 posts