Drury wrote:The save's only running the one specific GRF file that can be found in this thread's original post. My OpenTTD had no problems figuring it out...

You posted a .grf file, not a .sav file. Wrong one maybe?

Now I'm 100% sure I'd have uploaded the right file if I weren't ill... Like nah, it's not like I'm normally that stupid.

title1.png
This is what it initially looks like. There are no visible vehicles for a while
(308.38 KiB) Downloaded 20 times

title2.png
After while, a steam train passes by, followed by a bus. The bus ignores the first stop, stops at the second, then at third, turns around at the crater in the middle of the road and then goes back, ignoring the first stop once again
(309.81 KiB) Downloaded 20 times

I like the look of this project, it reminds me of Tiberian Sun

I got one to be full of blue squares

Actually in that save at the top of this page, very shortly after it was made, one of the houses turned blue.

I thought blue cubes only appear once all resources are available?

Drury wrote:I thought blue cubes only appear once all resources are available?

Yeah, that's the way it's supposed to work normally...

But, I did implement a failsafe of sorts to ensure that towns can never shrink so far they can't be saved. If a town shrinks below the necessary number of buildings required to deliver town growth cargoes (currently 3), self-sustained buildings will override their normal limitations and start appearing anyway. Towns should not be allowed to naturally shrink below 3 buildings though, so you must have destroyed some buildings in the town for that to have happened (otherwise that's a problem).

Actually I haven't destroyed any buildings. I'd just founded two towns with the smallest size possible (in scenario editor) and connected them with roads.

Sooo... That's a problem? Technically map generator can generate such small towns by itself.

Well, if the town is created that small then I guess it's not a problem, there's not much I can do about that. I'm glad you brought this up though, because it turns out I did in fact make a small, but important, mistake in that part of the code. Towns are allowed to shrink down to 3 buildings, but the failsafe is triggered at 3 buildings, when it should be set at 2. I'll make sure to fix this

I did end up with one blue building appearing in one town that I had been bleeding of wastelanders, and I agree that 'preserving' the town with shacks would be preferable.

Very considerate of the wastelanders to take the time to disassemble their old ruins as they desert the town...

Okay, new version (finally) added to the first post. I've made quite a few tweaks to the whole failsafe mechanism, most notably shack buildings will now be built instead of self-sustained buildings when towns are too small. Also added a few sprites related to roads and the two railroad railtypes, just to make them more complete. Fairly minor update, but I definitely recommend to update - it should be savegame compatible.

I am working on some buildings though, so next update will include some better houses at least

Sorry to those of you who have been waiting to see some progress on the set, it's taken MUCH longer than I wanted it to to get this ready, but I've made some decent progress at least. Version 0.2.0 brings some big updates, most notably the addition of Road Vehicles! I've included a full compliment of nearly 150 unique road vehicles spanning over 100 years of gameplay. Now be warned, there's been next to no playtesting with these vehicles yet, so all I know is that these vehicles will be somewhere between 100% perfect and completely broken

There is much tweaking and balancing to be done for sure, but only with thorough playtesting can that be achieved. That takes a lot of time which I haven't had, so if you have some suggestions please bring them forward!

I've also not had the time to draw unique graphics for all of these vehicles, as that's also very time consuming. I'll be pecking away at it in the months (years?) to come but if you have some sprites you'd like to contribute, or even just some ideas on some vehicle designs, that would be awesome. There's no shortage of vehicles available to fill graphics in, so any help is appreciated! 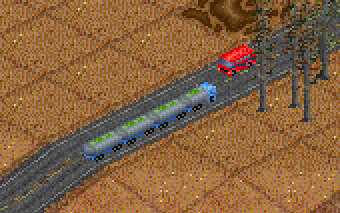 Another fairly major change is that I've corrected the behavior of the Food Lab industry such that all required cargoes must be delivered in order to produce Clean Food, unlike before where any delivered cargo would trigger production. Once all three cargoes are available in the stockpile the industry will begin producing Clean Food until the supplies of one or all of the cargoes are exhausted. I wasn't able to implement it exactly the way I wanted to (where delivery is time-dependent), but at least it works better than it did.

Also included in this update are better house sprites (i.e. no more colored cubes!), proper river/canal graphics, matching road surfaces for bridges/tunnels/etc, several parameters to turn off each part of the set, improved cargo icons courtesy DanMack, and some other miscellaneous tweaks and fixes. Unfortunately a few of the changes made it necessary to break savegame compatibility so this update will not work with existing games. I'll try not to break compatibility too often from here on so as not to ruin any new games.

Well, I think that's everything. I'm making Wasteland 0.2.0 available on Bananas in addition to the first post of this topic to reach a wider audience, and so if anyone wants to test it online it will be more available. Enjoy!

Also, about a month ago I released a Wasteland Town Name set on Bananas which greatly expands on the idea started by Redirect Left. I definitely recommend using it in your games to complete the apocalyptic atmosphere!
WSF Ferry Set [WIP] || American Road Replacement Set || NightGFX Base Graphics Set || Wasteland [WIP] || RattRoads (NRT Only) || American Bridge Replacement Set [WIP]
Top

Literally one of the best releases this forum has seen in a rather long time. Can't wait to get home and have a fiddle with it!
Official TT-Dave Fan Club

Kind of having troubles catching up again, like now I make transit system only to realize they don't want to visit neighbors in ruins, they just want to work in mines!


colossal404 wrote:Um, I'd like to report a bug... Iron ore mines does not produce iron ore... (and none of the raw material producing industry accept wastelanders :S )
Or am I doing something wrong?
Othervise nice project, I just discovered it, but I like the unique idea!

Was about to report this.

I can get building materials out of cement chain anyway, and getting chemicals right out of iron ore mines is by no means unwelcome! I dare you to fix this

Um, I'd like to report a bug... Iron ore mines does not produce iron ore... (and none of the raw material producing industry accept wastelanders :S )
Or am I doing something wrong?
Othervise nice project, I just discovered it, but I like the unique idea! 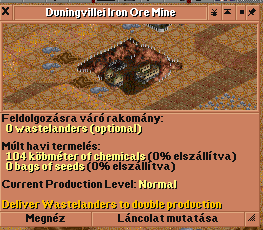 I like how when I stop providing resources, the plant just breaks apart and then repairs itself again when the resources finally do arrive.

Also, this used to be the largest town, then I started providing irradiated food and water, causing it to devolve into this. Remember kids, radiation is very very unhealthy.

Same happens to me, in the industry chain, nothing produces iron ore.

As "colossal404" said, Iron ore mine produces chemicals and seeds...


I'm having lots of fun with this newgrf. Good work.

Just started playing - in awe, Andrew... Truly worth the wait.

A very very minor thing discovered thus far: A station built next to a farm is suffixed as "... Mines"

This is great fun! Spent 8 years developing Meresti from 29 people to 360!

A 128 x 128 map gives a couple of each of the raw materials and one each of the other industries on the "Normal" setting. Not quite sure this is enough, but appreciate this is a feature of a wasteland!

I wonder if some of the road vehicles need some tweaking to make them more "different" - I just built the best of each one. But appreciate this is just a test.

I am SO impressed at this - it totally brings a new dimension to the game! 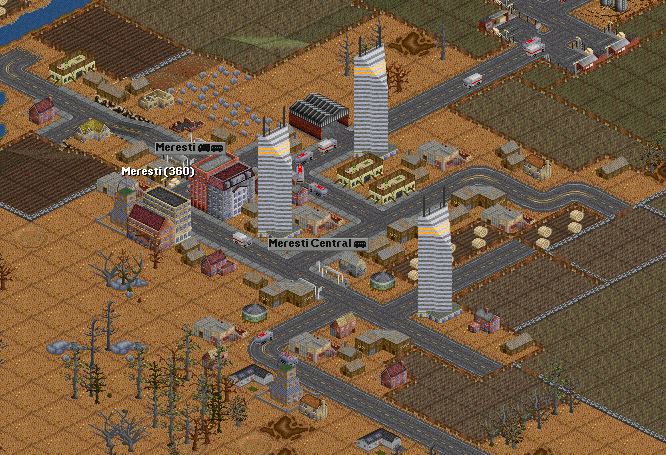 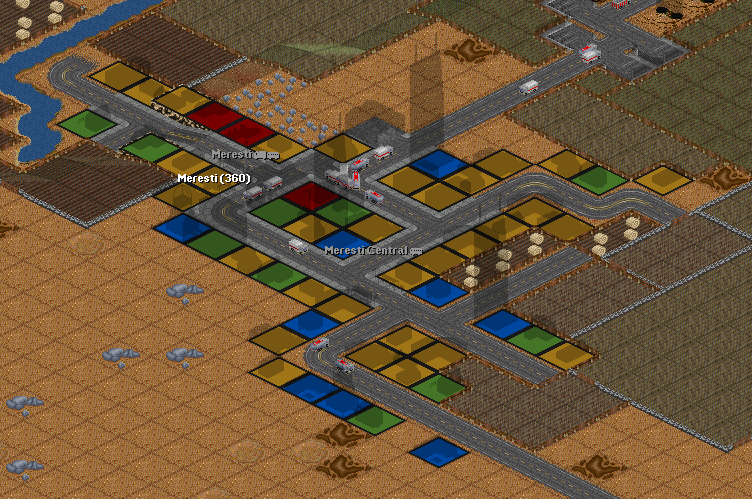 Meanwhile I went bankrupt after every town I touched disappeared from existence,

It always goes like this: I bring them water or irradiated food or both and they start flattening their rubble. However, they barely ever build any shacks in their place. There's never enough shacks in one place to even consider bringing clean food or building materials. Eventually there's not enough ruined houses to accept irradated food and water and I'm forced to close the line.

Might have to do with some of my settings, I'll report tomorrow,

In fact I do, somehow didn't even notice.

Not sure how that explains it, though.

Only dumb people quote themselves, and only the truest retards put such quotes in their forum signatures
-Drury
Top
Post Reply
238 posts