This is so awesome! Easily my favorite GRF ever (sorry everyone else in history).

Apparently bright company colors don't work with this, so whatever vehicle set gets made for use with this will have to use only the darker shades of cc.

Well, I have quickly rigged one together, but OpenTTD has once again outsmarted me. Adding the GRF (or any other town GRF i've tried some others to check mine wasn't wrong) to the list of GRFs and hitting new game doesn't generate them using the names specified. No idea how anyone has the patience to do GRFs, using NML or otherwise.

YNM wrote:Well, mutation isn't just by radiation... Also, canned foods are sterilized by radiation so that the term "irradiated food" for me sounds healthier than clean food at first... (Really, that was my thought the first time I saw it !)

Then you're looking for "contaminated", not mutated. Mutated food doesn't really sound right to a native speaker, even if it's the most scientifically accurate.

Redirect Left wrote:Adding the GRF (or any other town GRF i've tried some others to check mine wasn't wrong) to the list of GRFs and hitting new game doesn't generate them using the names specified.

Discover the wonder of the game options dialogue.

after some playing about with NML and some annoyance later, ta-da!

currently most names are from Fallout: New Vegas. including the Republic of Dave!

This is a non-exhaustive list of possible town names here, if anyone likes it, I can add more from other similarly themed games, or come up with some of my own!
edit: altered the grf name to one slightly better than 'fallout.grf'
edit2: now i think about it, there are a lot of suitable names from places near me, such as "Hanging Stones, Rockmill & Kilner Bank" - all somewhat dismal sounding places near me, i'll write them down for any future modifications if anyone is interested in such a thing

Awesome, I was waiting for someone to make a town names grf!

I'm a fan of Fallout 3 myself, which is where a lot of the inspiration for this grf came from.

About Vehicles: I honestly have put very little thought into any specific vehicles yet, I'll let what's best for gameplay be the guide to that. I only have the basic concept of starting with scavenged, beat-up vehicles early on and slowly advancing to better ones until more advanced (pre-war) technology becomes more stable. I do want quite a few vehicles though, because I imagine rebuilding a whole map will take quite a long time

Redirect Left wrote:Also, I assume you've not overlooked it, but bus stops & truck stops need altering too, perhaps have them as just really poor quality things rigged up out of corrugated metals, or similar metals that'd look like they recovered and re-used it from somewhere?

edit: a shodily put together road depot using perhaps mis-matched colored metals may be look pretty neat too, give the feeling that they're really struggling to get things up and running.

All good ideas. One thing that's tricky though is like in this case, there's no way of changing the graphics once things get better, so you're stuck with rickety old bus stops even once society is supposedly running fine

This affects many things in the game, and about the only way of changing graphics is by checking the date (which is unreliable). Some kind of acceptable balance between destroyed and repaired is probably necessary here, but I don't know what that would be.


Drury wrote:Apparently bright company colors don't work with this, so whatever vehicle set gets made for use with this will have to use only the darker shades of cc.

What, you mean you wouldn't enjoy the irony of a bright yellow bus with a smiley face on it driving through a bombed out town?

Thinking basically about trains... you have no oil or electrical infrastructure, so we're either dealing with Biodiesel (not likely given scarcity of food), Scavanged oil can be had, so that's a possibility for diesels. I can almost see old steam engines being rebuilt... Interesting concept for sure.

Russian railways have always had that "Industrial" look to them... Take the P36 4-8-4's of the former Soviet Railways... Beasts and with modifications, at home in any post-war world.

In regards to the lack of Wastelanders to boost production later on, possibly have a later (2100 or so) intro of a "Machinery plant" or something to deliver equipment to boost things?

And on another note, how about some Cargo Icons? Courtesy FIRS and a bit of editing 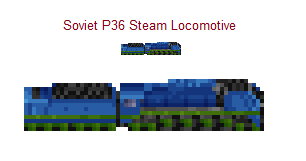 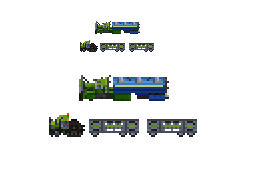 Regarding steam engines, I can see how they would be attractive due to being able to burn plant matter, but it seems like coal would be impractical to mine in this setting. Also I don't know how easy it would be to come up with all the steel to make high-pressure boilers and tanks from scratch, whereas diesel motors could be scavenged from various surviving and destroyed military and civilian vehicles that would dot the landscape of former cities. And even though gasoline has a short shelf life and may no longer be usable by the time survivors emerge, diesel lasts much longer, and could be taken from various stockpiles to be found. Additionally, various plant derived replacements could be made - perhaps a a biodiesel depot as a black hole also accepting irradiated food...?

I've had a few ideas today about housing for the wastelanders - once they get dropped off at the mines they seem to be worked to death on the first day as there is no need to house any of them! Perhaps much as the secondary industries get 'rebuilt' in response to delivery of raw material, why not include an area of empty land tiles in the layout of some of the mines, and then draw dormitories/barracks/tents/shacks after delivery of wastelanders? Other, crazier and perhaps bad-for-gameplay ideas I had were to have some special industry or houses that act as worker housing, or have industries also produce laborers when they are receiving wastelanders, who get taken home back to town after their shift - but somehow I imagine that the guys toiling away in these mines are not commuting...

I wonder, is it, or should it be viable to grow and maintain a settlement of wastelanders without the town disappearing or evolving in to a refurbished city? What is the best way to do so?

Bio-diesel in Fallout... Oh feck off and gimme nice and huge nuclear locos. I mean- ok, it's only inspired by Fallout, but just imagine...

Possibly change the water colour from blue to brown or something? Represent poisoned water? I expect planes and ships will be scarce?
Regards,

Ships aren't scarce, you could say they're all over. The real problem would be making them waterproof again and dragging them back to shore.

And I suppose there'd be enough crashed bombers lying around.

What I love about this idea is how well it's caught the imagination of everyone.

It looks fantastic, it has a fantastic concept and totally changes gameplay.
Official TT-Dave Fan Club

DanMacK wrote:Thinking basically about trains... you have no oil or electrical infrastructure, so we're either dealing with Biodiesel (not likely given scarcity of food), Scavanged oil can be had, so that's a possibility for diesels. I can almost see old steam engines being rebuilt... Interesting concept for sure.)

The TV series Revolution depicts a distopian world 25 years into the future, after a cataclysmic event where all the world loses electrical power. Nearly every world government falls, societies fall into chaotic disorder and are rebuilt. After 25 years, railroad infrastructure is rebuilt to the point where steam trains which had been on display in museums were now able to be put back into service. Sailing ships and mechanical operated steam ships were also brought back into fashion. Ground transportation was largely dependent on horses, mules and other domesticated pack animals. This future isn't nearly as desolate as the concept behind Wasteland, but just some ideas.
Do you like drones, quadcopters & flying toys? Check out Drone Strike Force!

Dave wrote:What I love about this idea is how well it's caught the imagination of everyone.

It looks fantastic, it has a fantastic concept and totally changes gameplay.

Yeah, this is the sort of stuff I've been waiting for someone to make happen for a long time (actually tried to do something similar myself but lost motivation very early on).

Usually you see stuff like Dutch trains or Czech trains or UK trains or Somalia trains, but this is something different. You can go nuts with this.

An idea for electrified trains - unlike everything on the surface, metro cars had a chance to survive (relatively) intact, no? It'd be neat to have those as a main form of passenger transport, and I imagine it's also much easier to simply lay a third rail instead of overhead wires on poles.

I'm not sure is it realistic or not, but I guess we shouldn't have any kind of long-distance electricity ? I mean, there should be EMPs...
YNM = yoursNotMine - Don't get it ?
「ヨーッスノットマイン」も合うでしょう。
Top

Why should there be EMPs?

I meant in the war that caused the scenario... Unless it's Terminator.
YNM = yoursNotMine - Don't get it ?
「ヨーッスノットマイン」も合うでしょう。
Top
Post Reply
235 posts