I registered a few minutes ago on this message board, for the purpose of thanking you for this fascinating set.

I play a savegame now for over a month, starting with just one town and some industries to creating income for funding more industries and towns. Overall, a complete colonization of Mars. It is the perfect addition for a real martian time with its nice Hard SciFi Style.

Of course, there are some minor flaws, but they don't affect my gameplay.

Thank you very much, it is a very innovative and inspiring set.

Hi Z,
I think I fund a bug for Aquifer Pump, the industry description text says require Machinery, but actually, the station can't accept anything. and from your Cargomap.png, there is no need Machinery either.

The industrial capacity of Mars, like Earth, is centred around raw materials and their extraction. The focus of industry is quite different though! On a planet where the environment is lethal the absolute priority of much industry is the generation of supplies for life support. The primary extracted materials are the trace oxygen from the air, and water from aquifers and concentrated ice reserves. To support this industry the homogenous compacted debris from millennia of bombardment, the surface regolith, and rarer metal ore deposits which feed into supporting the life support industry. The ultimate products of oxygen and food are required for the growth of towns, while fertilizers and machinery boost industry production and additional water can boost colony growth.

Yeah, there are definitely a few bugs in the industry chain. Things like production change feedback don't work at the moment either...
Needs a big overhaul, haven't got the time to do it at the mo though

I regret not seeing this thread earlier because I have some suggestions for industries:

The ice mine should be located in snow-covered areas where ice is more evident.

You talked about some sort of "Air mine", Have you considered the possibility of an "Air Exchange"?

What I mean by that, is that it's like a Scrubber which takes in Co2 from the atmosphere, liquefies it and packs it into a vehicle and sends it to a recipient while it takes water, separates the hydrogen from the oxygen and releases the oxygen while transporting the hydrogen to Fusion power plants for fast, reliable energy production.

The Co2 could be delivered to Farms to improve the growth of food, it also could theoretically be used in factories to produce carbon-based materials.

I think there should be a type of "Ice mine" which would only be found near cold areas where ice is prevalent and easy to get to (At least, easier and cheaper compared to the underground resources).

I believe that despite the lower gravity and air, that wheels would still be used because of their flexibility and their higher friction. The vehicles themselves may be designed to cope though.

I wonder if things like Austrailia's Road Trains be possible on the mars landscape.
Top

I am playing with this, and all i can say is ... awesome sets! The aesthetics fit with the concepts making a curious alternative to standard OpenTTD gameplay. Definetly, this should be added up as the 4th/5th climate. That's where my question comes: Will we see this at Bananas?
Top

I think the main problem is lack of an active maintainer, that is, someone that pushes the set from the current state to fully working, publishing, and fixing bugs that pop up.
Being a retired OpenTTD developer does not mean I know what I am doing.
Top

Yea, I noticed the inactivity of the sets. But the problem is: if developing has stopped and it seems to not being continued, why not releasing the sets as it is, (because it is pretty complete)?

Otherwise, it will keep at this state (i mean, with some bugs), but people will get it more difficult to find and, in the end, to enjoy.
Top

Right now I am actually trying to make the time to finish this set, but am struggling a bit. The biggest thing I need is good bug reports, e.g. a full list of trains that don't have the right length, all industries which seem to have weird cargo acceptance, etc. Hopefully I can then do a few quick iterations and get it finished.
GRVTS/eGRVTS --- Generic Tram Set --- UK Town Set --- zBase ---RichardWheeler.net
Top

Alright, I started a game with this:
It looks and works great - only a few minor issues so far:

1) In 1920, all three rail construction tools (Ground train, Monorail, and Maglev) were available, but once I built train depots, I realized no engines were available to buy yet - only wagons. It should probably conform to the default behavior of rail types only becoming available once the first engine for them is introduced. And the NewGRF description should recommend a sensible starting date.

2) A farm that I was supplying with lots of oxygen, disappeared. (It must have closed down, though I missed the message.) Is that supposed to happen?

3) I built a single bus station in a town and connected it to a neighboring town using a few buses, and the station soon got far too many waiting passengers. Is this supposed to happen? After turning on automatic cargo distribution in the settings, building a few more buses, and waiting a while, things started to look saner, so maybe it's just a normal OpenTTD thing... 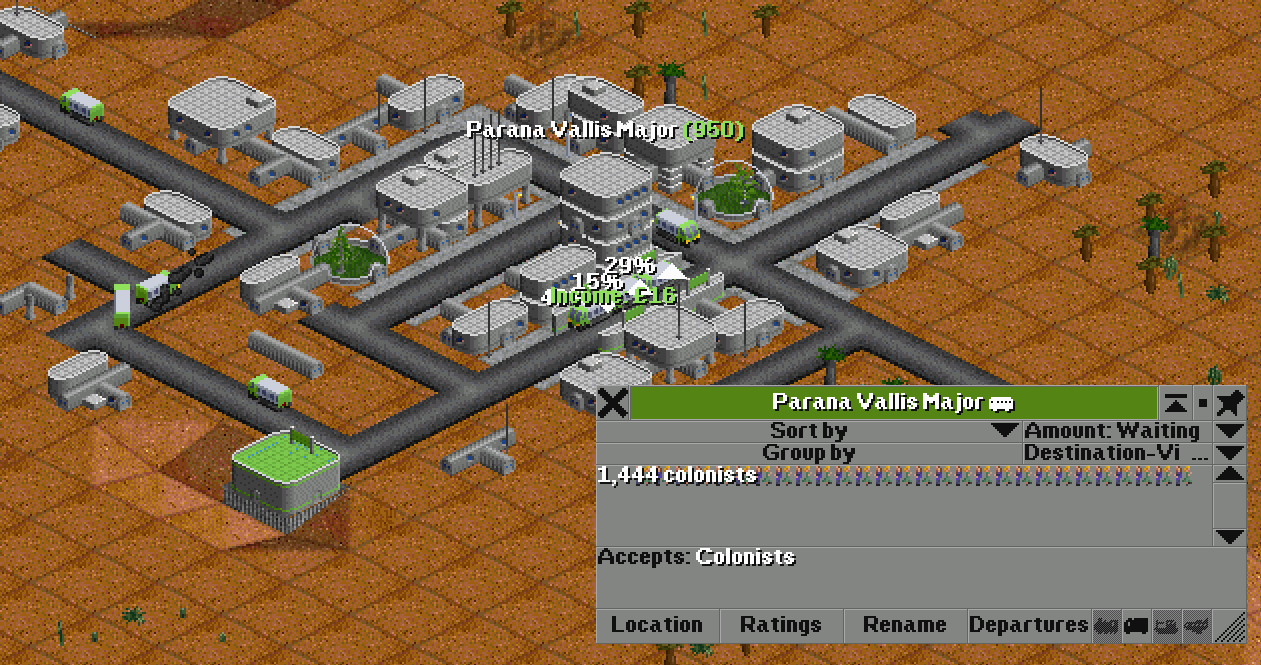 4) The "total cargo capacity" string in the details window of trains only shows the current cargo, not the actual total capacity:

5) Towns above the snow-line say "components required". It should probably say "food", instead, because when food is delivered the text changes to "components delivered": 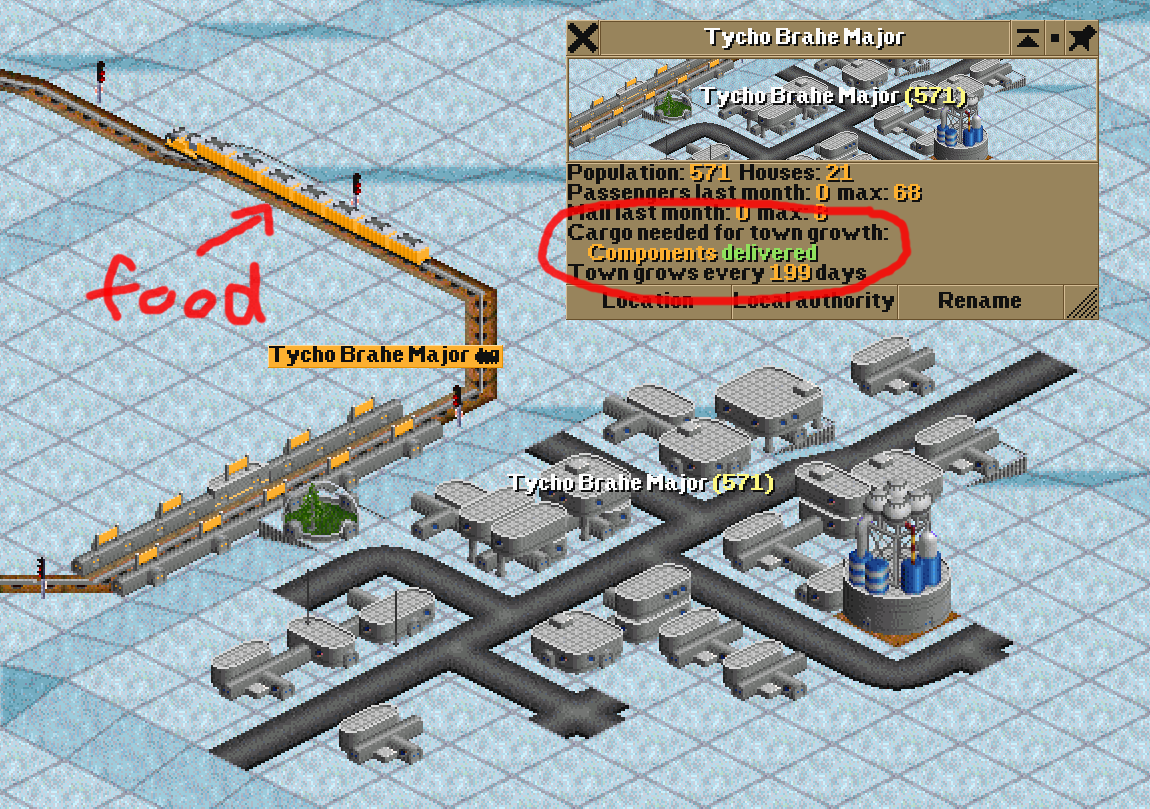 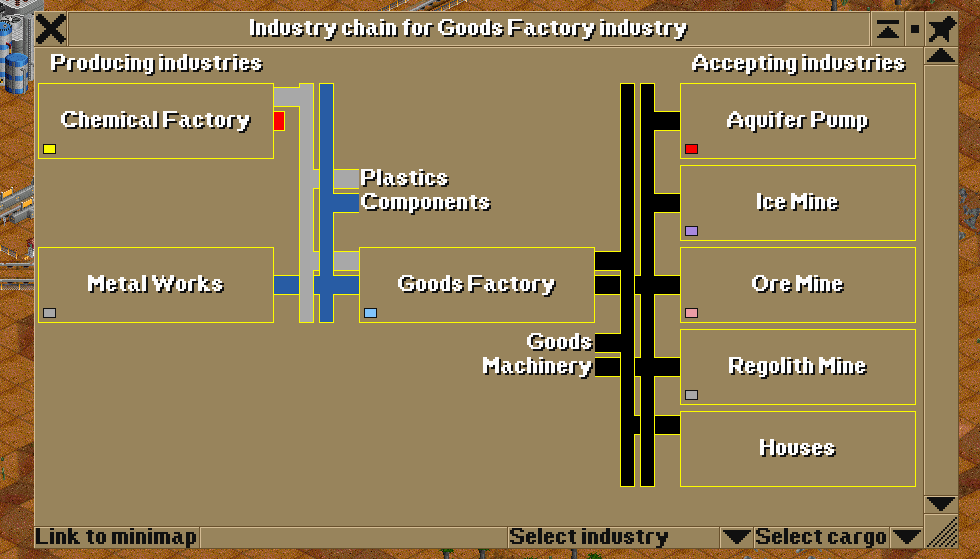 7) North-west and north-east facing rail tunnel exits don't show the tracks leading into the tunnel, making it look as if the rail ends before the tunnel even though it doesn't. This affects all three rail types, here shown with monorail:

All in all, it plays really nicely! Thanks for making this!
Top

piratescooby wrote:Greetings from Mars , I to love this set up , my advice is to start up much later , my preference is 2020-2050 , load up a few additional grfs and have fun .

Aye , I've actually got the 2 of them , did not notice until started . Just a experiment ,trying to find a decent train set to match the industrys .
Top

Thanks archy, so many yummy bugs for me to fix

Bug testing is absolutely what these sets need, reports like this are really useful (just need some time to fix them now

Found some more for you. The bridges glitch up. 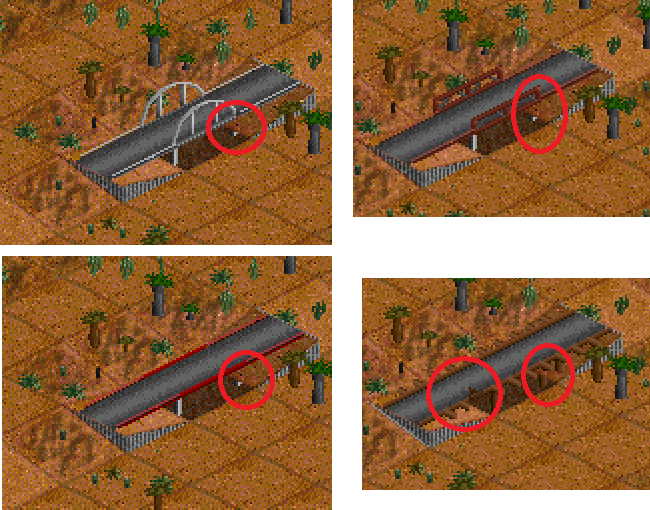 Licenses for my work...
You automatically have my permission to re-license graphics or code by me if needed for use in any project that is not GPL v2, on the condition that if you release any derivatives of my graphics they're automatically considered as ALSO GPL v2 (code may remain unreleased, but please do provide it) and carry this provision in GPL v2 uses.
Please ask someone in-the-know to be sure that the graphics are done by me. Especially TTD-Scale, long story.
Top 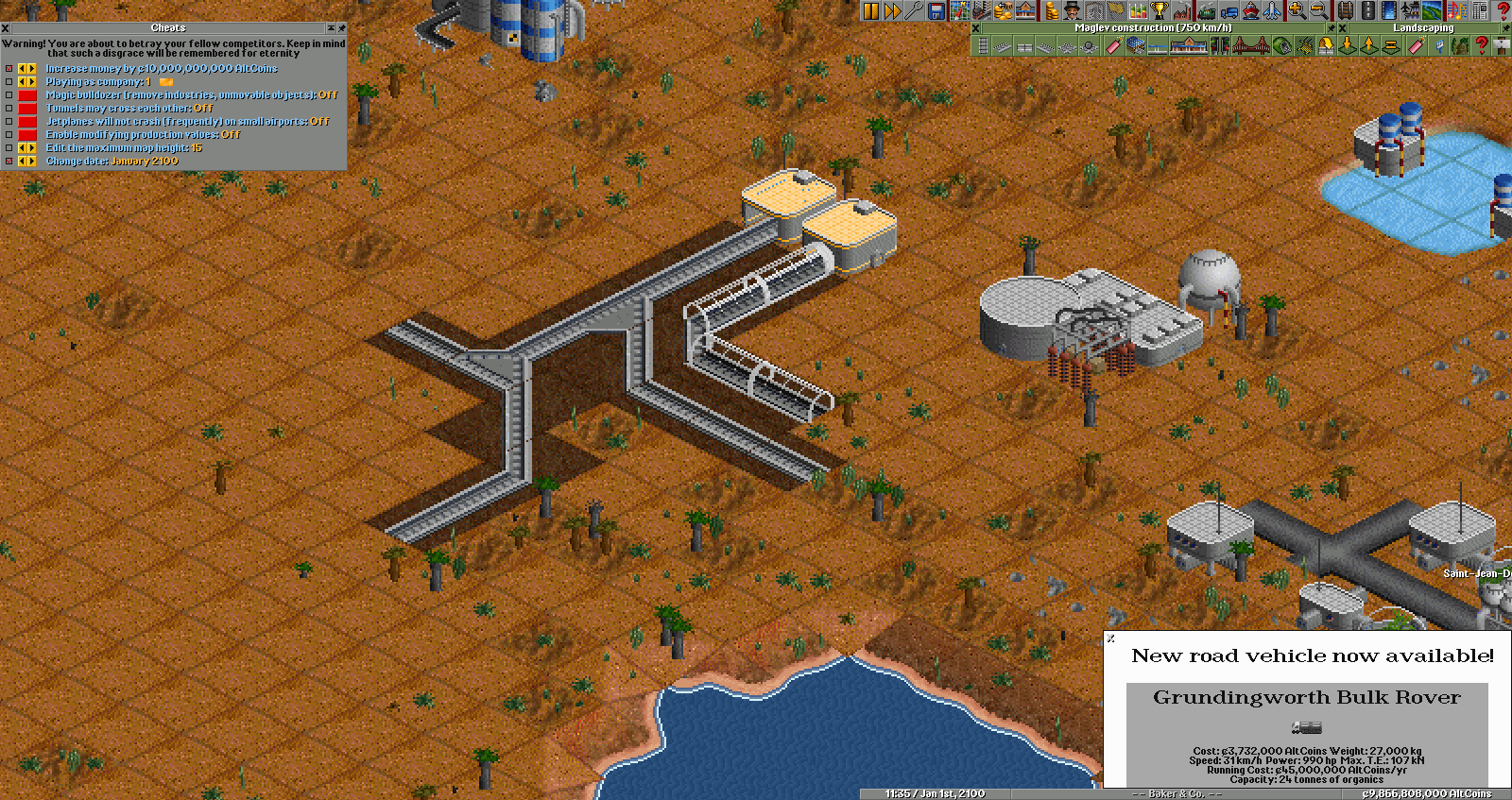 This seems to be an issue with the Mars tile sprites sticking over the edges, nothing I can do about that.

I tested it and it happens with other custom railtypes as well, so it's not limited to this set.

Could this issue be fixed? I would love to use VacTrains with this.
Licenses for my work...
You automatically have my permission to re-license graphics or code by me if needed for use in any project that is not GPL v2, on the condition that if you release any derivatives of my graphics they're automatically considered as ALSO GPL v2 (code may remain unreleased, but please do provide it) and carry this provision in GPL v2 uses.
Please ask someone in-the-know to be sure that the graphics are done by me. Especially TTD-Scale, long story.
Top

Just remembered this set from back in 2015. Amazing - I thougt it had died. I just got to start a game myself later

Edit:
I only found Open GFX Mars Landscapes - but I am missing everything else from Mars Townnames to Tracks and Trains. Did I miss something? I didnt find any manual Downloadlinks in here either...

At least Landscapes works so far. The Rivers have grassy borders and I cant set Water to "none" for map-generation. But thats probably normal.
Last edited by Audiopulse on 18 Mar 2019 19:19, edited 1 time in total.
Top

Audiopulse wrote:I only found Open GFX Mars Landscapes - but I am missing everything else from Mars Townnames to Tracks and Trains. Did I miss something? I didnt find any manual Downloadlinks in here either...

At least Landscapes works so far. The Rivers have grassy borders and I cant set Water to "none" for map-generation. But thats probably normal.

Please don't double-post, don't ask the same question in two different threads - or if it's very similar but not identical, then at least cross-link. I answered in the other viewtopic.php?f=29&t=84967#p1219501

Edit: I just found the source for Zephyrs latest Public GRFs on page 8 of this Thread. Complete with an HowTo for installation:
viewtopic.php?p=1153472#p1153472

May I suggest just linking it in the OP?


Edit2:
I noticed some graphical glitches - but nothing else impacting gameplay, really. OpenMars is quite playable and Im having great fun.