This set has merged with Flogeza's City Objects Set - I recommend all discussion happen in that thread -> http://www.tt-forums.net/viewtopic.php? ... it=flogeza

Well, we have all played OpenTTD, it is such a great game. Then, all those wonderful scenarios created by our comrades, scenarios of every continent!

There's Australia, Canada,
certain parts of the USA, the UK, and that's all I can remember to say.

But what makes each city unique? Nothing really, except their name! We can name a city Berlin, but for people who can't read they couldn't tell it apart from a city named Paris in OTTD. The buildings are the same, its superhard to make building set that has specific buildings in specific places,

The solution, landmarks! When simply naming your city and mocking its real-life transit is not enough, even with the best scenery GRFs, you need something to make the city unique!
Also included are worldwide flags!

Now this is just my ideas here. This is an international set, I won't dictate what you want in it, and I won't be drawing everything for you. There's also coders we will need, but first we must attract them with some sprites

I am also in the process learning of writing, yes, simply writing the code for the objects.

If you are so excited to do something but can't draw, here's a drawing tutorial by Purno for a train(s):

If you can't code, there's an NML tutorial on OPenTTD's wiki. To be honest, I can't code either, my friend.

Under Construction!:
(Priority Landmarks that were suggested by *Me* or someone else.) 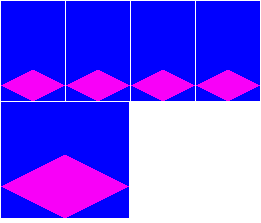 Some recent commits to OpenTTD have drastically increased the amount of NewObjects that can be loaded in a game, so there's no real reason to code object sets like this as stations anymore.

Also, if I ever get around to finishing my drawing of the Space Needle, I may donate it to the set. I wouldn't hold my breath though

When I originally suggested NewObjects back in 2006, a set such as this one is exactly what I was thinking of.

I'll be looking forward to your collection.

Yeah, do not code these as stations, as NML does not support stations. Code them as NewObjects.
Eyecandy Road Vehicles | Fake Subways | Supercheese's NewObjects

Please remember though that if you do choose BMP, no one using TTDPatch can use the set.
Formerly known as r0b0t_b0y2003, robotboy, roboboy and beclawat. The best place to get the most recent nightly builds of TTDPatch is: http://roboboy.users.tt-forums.net/TTDPatch/nightlies/
Top

No reason to use "objects" for everything. E.g., buildings could/should stay buildings, it´s perfectly feasible to control their number and placement inside a town by the house set´s code (and there might even be an opportunity to set selected buildings from the scenario editor in the very next future).

O/c, the usual and easy way out of the "too many objects" problem was to increase the number of objects/object newGRFs in-game, but that´s as ridiculous as trying to fight increasing road traffic by building new roads.

E.g., I don´t see any use in "fake roads" spoiling the map with thousands of objects. Objects should only be used in cases where there´s no other possibility.

And, BTW, "aNiMaL not supporting stations" isn´t a serious argument against using stations, at least not since there are not less than two other possibilities to code them.

This is a great idea for a newobjects NewGRF. May I suggest you create a template which every contributor of this set will use? This will make the life of your future coder much easier. I already made a basic sketch of a template, you may reuse/modify it in whichever way you want. The pink aligment box in this template correlates to one in-game tile, so using this template, the artist would align their sprites in the template here, and when coding, the same template code could be used for every object.

Object template for 4 views (not all views have to be done). Replace pink with blue once your sprite is ready.
newobj_temp_example.png (3.79 KiB) Viewed 5685 times

I am fairly confident objects can be larger than just a single 1x1 tile. I think the limit is 2x2, although this means you can use 1x2 and 2x1 as well.

However, I am also sure that when these are drawn they must be separated into 1x1 to be coded. juzza1 wrote: May I suggest you create a template which every contributor of this set will use?

Sorry, but something like this is totally useless. Instead of agreeing on a "template", there should be an agreement on scale and drawing style (texture, colours, ...), in case drawings of different artists should be used together in one set. Coding (w/r to dimensions and offsets) would be trivial, and (restrictive) provisions for later coding are unneeded, at least at this time.

SwissFan91 wrote:I am fairly confident objects can be larger than just a single 1x1 tile. I think the limit is 2x2, although this means you can use 1x2 and 2x1 as well.

However, I am also sure that when these are drawn they must be separated into 1x1 to be coded.

Objects can be any rectangle up to 15x15 tiles in size. Sprites would best be done tile by tile, though.

michael blunck wrote:And, BTW, "aNiMaL not supporting stations" isn´t a serious argument against using stations, at least not since there are not less than two other possibilities to code them.

One of which is a lot easier than the other michael blunck wrote:Coding (w/r to dimensions and offsets) would be trivial, and (restrictive) provisions for later coding are unneeded, at least at this time.

Going through tens or hundreds of sprites and finding the correct sprite offsets for each one of them is not trivial at all, especially since it can be completely avoided from the get-go. Using a template does not "restrict" anything.
Projects I'm involved with
Top

juzza1 wrote: Using a template does not "restrict" anything.

Using templates is only useful for vehicles.


But discussion about templates, and argueing about their relevance is of no importance here. Agreement about scale and drawing style would be the most important thing, and only after this a sound concept of such a set is needed. Otherwise, it wouldn´t be the first "landmark set" proposal to never see the light. Not to speak of numerous other sets ...

And BTW, there are already sets, including such "landmarks".

Using a fixed scale is rather ridiculous with different landscape objects given the rather big artistic licensed exercised throughout the whole of OpenTTD, e.g. comparing industries, houses, vehicles, trees, rivers, ships....
Important is that it looks well, not any actual adherence to a fixed scale. It likely totally suffices that their sizes compared does not look totally ridiculus.

Using a standard template in how sprites are supplied like Juzza suggested will be of big gain later on when actually coding.

I didn´t write "fixed scale". I was writing "scale".

If it was me, I would draw a fairly simple sprite first of all and then see how it looks in game. I wouldn't know if my London Eye, for example, should be 100 pixels high on a 1x3 tile or 30px on a 1x1 tile. When the shape is sorted I could then think about shading and making it look pretty.

From memory I can only think of the Burj Al-Arab hotel as a landmark that has already been drawn. It also depends on your definition of a landmark.

Thanks Juzza, certainly that's a better scaled template easier for coders and sprite-makers alike. Chances are there will only be 1 view, for most of the towers, 4 views for some iconic buildings that look different from differing perspectives. And all those other landmarks, it would depend

As for the scale, it would be similar to some of the larger townsets out there. Total Town Replacement Set and the UK Town set's latest version has tall skyscrapers and shopping plazas, it depends if you are drawing a tower, a TV tower or such, it would be 1x1 tile. It's height will be relative to the height of the tallest skyscrapers in these sets, now to figure out the height we can say every story is 3 m(10 ft) to 4.5 m (15 ft) tall, the latter is mostly for office and commercial buildings, so simply count the floors of building in OTTD and figure it out.

e.g. That 5-storey default office building is (4.5x5) 22.5 m tall, and just add around 2 m for nonsense on the roof, depending what's there. But no, your making a 300 m tall tower and it would be insanely tall at that height. So don't depend on that maths I just wrote if your landmark is taller than the tallest skyscraper. So find the tallest building in OTTD and try to scale it in comparison to it. No one wants to see a tower or landmark of any sort below their skyscrapers in certain sets...


If your making a stadium, a large arena, or something likewise it would probably be no less than 2x2, if not more...You might want to compare it to the default arena or the shopping plaza in TTRS, even the schools in the UK set. Of course there are other townsets out there, but they compromise of shorter buildings which are harder to scale tall structures toward.

A landmark can be anything iconic in a city or country, doesn't matter what it is, even the World's largest toilet.
Tschüß!
Top

Finally, the Berlin TV Tower is done!
Still it is incomplete, as now I must add the Pavillon which is at the base of the tower

I've compared it with one of the taller TTRS skyscrapers. Note that if the tower was realistically scaled, it would be more than twice as high as Zimmlock's building. But that's a bit ridiculous in OpenTTD considering someone might want to make or suggest even taller landmarks. So I kept it at a reasonable height, it is still taller than all buildings that I've seen in OTTD

Now quick question, does the colour labelled "Red cycle", it will cause a flash of red when the graphics are in the game? 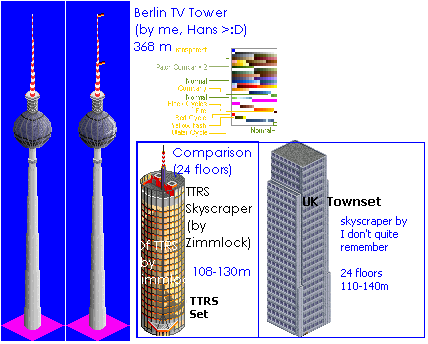 The "red cycle" colors will result in flashing red as seen on the Transmitter objects in vanilla (O)TTD.

I'm not sure, but having such a tall object might result in problems, I know that certain TTRS buildings are just too tall and cause graphical glitches every so often.
Eyecandy Road Vehicles | Fake Subways | Supercheese's NewObjects

That looks good. My first thought, however, is that it may be too tall. Isn't 100px the limit usually? I don't know whether that is an absolute limit or whether anything taller than that will cause glitches.

Total Alpine Replacement Set: Industry, Town, Objects
**ATTENTION**: If anyone would like me to help draw snow stages in any of their GRFs let me know. I genuinely enjoy drawing them.
Top
Post Reply
87 posts