Quast65 wrote:Please correct me if this is the wrong way to do it.

No, that sounds quite okay. Maybe I'm just surprised you got a positive answer for the Canadian Stations as I still remember much drama about the various Canadian GRFs

Because of issues like that I wanted to be as clear as possible what specific sprites we would like to use and how they will be used in the new GRF (and under what license), when asking for permissions.

I'd like to request adding YARRS roads to the GRF please. Buttercup is still around occasionally and coded stuff for the original OGFX, so I'm not expecting major problems in licensing terms.

Edit: And while I think about it, there's also Urban Renewal (though I can't get it to work at the moment!) and the Hungarian Road Set. With these, I think you'll have covered every road set ever used, excluding BornAcorn's dreadful set that he practically disowned and the European Road Set from Hyronymous that was superseded by the Combined Road Set.
Last edited by Pingaware on 03 Jul 2012 19:28, edited 1 time in total.
The Revamped West Country
Top

Oh dear, I thought you might manage a quick reply. Just to make sure you see them, as edits don't change the thread to unread, see my edits to the previous post!
The Revamped West Country
Top

You could also put your subway entrance on top of it

Or, throw in an IRS asphalt tile.
Do you like drones, quadcopters & flying toys? Check out Drone Strike Force!

kamnet wrote:You could also put your subway entrance on top of it

Or, throw in an IRS asphalt tile.

. I also thought about the ISR tiles, but thought I would wait to suggest that to Quast as he has a lot to make as is now.

Not bad ideas at all, but I have some questions about that.

Is it possible to have multiple tunnels inside a railtype, so a different tunnel at each track?

So for example in stead of 3 tracks we have now, you could get these 6 within the railtype:

This is mainly because changing all the tunnels within the railtype to one with a subwayentrance would look very strange at some places, some of my metrolines have their depots outside of the city and having a subwayentrance in the middle of nowhere just looks strange

It is offcourse not difficult to draw, so I could still do that after I have finished implimenting the roads, but maybe Beul could play around with the coding in the mean time to see if that could work.

But talking about ISR gave me an idea... We now have 3 tracks within the railtype, where we had to place some graphics of rusty rails to avoid some problems within the game. Could 2 of those (the electrified and un-electrified) be changed to rails with a full ISR-tile as groundtile? Because I always disliked the look of grass inside my industrial areas

Every railtype can have one type of tunnel entrance attached to it. One could do some variation depending on terrain type and build date, but you can't make "different flavours" user-selectable with that. So essentially for every different tunnel entrance you need to use a separate railtype. Your proposed six variants will therefore consume 6 railtypes, which won't make the set particulcarly compatible with several other track sets, given the 16 railtype limit.

But in essence this set proves that we desperately need this feature called "enhanced tunnels". Then you could simply build a real road on top of the tunnel entrance...

So Let's stick to the 3 tracks we have now.


As for your last question: yes, one could display a tile instead of track

That is not what I meant

I mean still seeing tracks (that can be used by trains), but with full ISR tile as "ballast" around/under the track.

I guess you mean that the entrance you would see will then be an overlapping tile. That is not a bad idea, but it has a disadvantage and that is that you would have to place a stationtile next to the entrance. This has a couple of problems:
- In the trainorders that stationtile should be set to non-stop (when it is not next to an actual station), not all players will have their setups as standard "all orders are non-stop"
- Also a name will be shown for that station.
- What should be drawn on the tile that is the actual stationtile to match it to the station next to it? Empty platforms, roofs, benches, grass, etc etc...
- Furthermore, most tunnels have slopes next to them and stations can't be placed on slopes.... So you would need an extra tile before you can have a slope.
- Also the overlapping tile will probably glitch when trains move through it, which doesn't look good.

And there are even more probems with the placing of the exit tunnel station tile, that I won't go into now.

Sorry that I shot down this idea

Quast65 wrote:That is not what I meant

I mean still seeing tracks (that can be used by trains), but with full ISR tile as "ballast" around/under the track.

Sorry, misunderstood. But it's still possible. Essentially you just make the ballast as wide as the complete tile. That's perfectly possible, won't even glitch

Quast65 wrote:I guess you mean that the entrance you would see will then be an overlapping tile...

Not overlapping per se. Essentially replace your road on top of the tunnel with a full grass tile. And then move your road to a station tile.

With the station essentially continuing into the tunnel, you have to build a station in front of the tunnel anyways, so that doesn't make much of a difference. And in fact, the tunnel would look much better when not built together with a station. I made a small example: 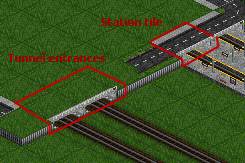 instead of adding a tunnel, why not use a similar approach as teh Modular locomotive sheds & ISR docktiles: create an overlapping tile that covers teh entrance will do

@ZxBiohazardZx: That would still create the problems I described earlier, at least it would use an extra tile.

Quast65 wrote:@FooBar: Please elaborate a bit more, I don't get it. So you would place a stationtile on top of a tunnelentrance? Is that possible?

No, in front of it.
If you put the station tile I indicated in front of the tunnel entrance I indicated, it will look almost exactly the same as you have now.
FooBar's Tram Tracks | TransRapid Track Set | Metro Track Set | OpenGFX base graphics set | FIRS Industry Replacement Set
Dutch Tram Set | Dutch Trainset 2 | Dutch Road Furniture
Top

Right, so that would still mean that it overlaps the tunnelentrance. Like this: 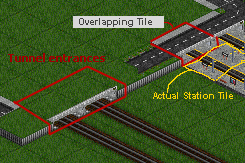 EDIT1, wait I get it, the actual tunnel is one tile further away, right? Like this: 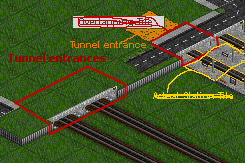 Still, there would be a problem with the graphics of the tile in front of the tunnelentrance, what should be placed on that? As there are so many options, like I stated before, that would mean drawing loads and loads of different options that are in the sets and requiring permissions for those tiles. As now I only need 4 empty platform sprites from each set. EDIT2: Ignore these remarks if EDIT1 is correct
Projects: http://www.tt-forums.net/viewtopic.php?f=26&t=57266
Screenshots: http://www.tt-forums.net/viewtopic.php?f=47&t=56959
Scenario of The Netherlands: viewtopic.php?f=60&t=87604
Winner of the following screenshot competitions:
sep 2012, jan 2013, apr 2013, aug 2013, mar 2014, mar 2016, oct 2020
All my work is released under GPL-license (either V2 or V3), if not clearly stated otherwise.
Top

Quast65 wrote:EDIT1, wait I get it, the actual tunnel is one tile further away, right? Like this:

Yes, that's it! I didn't know how to make it more clear, but luckily you figured it out

Quast65 wrote:EDIT2: Ignore these remarks if EDIT1 is correct

I did allready know that it is not possible to have multiple tunnel entrances in one track type. What I was planning on doing though is the following: keep the three basic rail types (non-el, el, and 3rd rail) but make the type of tunnel adjustable by a parameter. That way the player could select the platform that fit's his favorite sation set/track type.

@foobar I like your idea of making the tunnel all grass and providing the entrance as station tile. I don't know how much work it would be in the drawing department, but codewise I do see a problem: I am a complete coding newb, and there is no documentation on station tiles in NML

Should not be to difficult though I guess.... It would also cover the problem of the railtype slots. Since you do not see the actual tunnel I could just make it compatible to all rail types (like the univ track in NUTS)

Edit: @Quast65: I do like the idea of tracks on "ISR ballast" If you are not allready working on it I would like have a go at drawing it.
Top

@ FooBar: That is a great idea!!! That way you could have custom entrances and they are railtype independent, so they could match all sorts of tracks that are being developed!!

Only problem I have with it for implimenting it into this GRF we are developing is that it will place a grasstile inside a city (where the tunnelentrance is under) and I wanted to get rid of that. So I think we should continue with the development of this GRF as we are doing now.

But FooBar, I think you should open a new thread with this idea! This could be revolutionary!

Quast65 wrote:@ FooBar: That is a great idea!!! That way you could have custom entrances and they are railtype independent, so they could match all sorts of tracks that are being developed!!

Only problem I have with it for implimenting it into this GRF we are developing is that it will place a grasstile inside a city..

not necessarily! we could make 2 rail typels (would still be less than 3) One with a grass tile, and one with some building on top. or a park, or a fountain, or anything that you could imagine

That is a good idea!

For me graphicswise it would mean I don't have to draw the rails anymore as the entrances will be stationtiles, though the layout of the sprites will have to be a bit different as stationtiles have a slightly different way of being built up than a tunnel. But that is just some minor copy/pasting work, that I don't mind doing.

However I think we would need 4 railtypes

EDIT @Beul: I think we should focus our work first on drawing and coding these tunnel railtypes. The stationtiles can be added later or even be added as a separate GRF (because I am not sure that stationtiles can be coded in NML yet). What are your ideas about the path we should follow?
Projects: http://www.tt-forums.net/viewtopic.php?f=26&t=57266
Screenshots: http://www.tt-forums.net/viewtopic.php?f=47&t=56959
Scenario of The Netherlands: viewtopic.php?f=60&t=87604
Winner of the following screenshot competitions:
sep 2012, jan 2013, apr 2013, aug 2013, mar 2014, mar 2016, oct 2020
All my work is released under GPL-license (either V2 or V3), if not clearly stated otherwise.
Top
Post Reply
114 posts