by Andrew350
Hello all, thought I'd share a little something I've been working on.

I've been messing around for about a week learning the art of GRF making, and I have to say I have a lot more respect for NewGRF developers now that I've tried it.

I have no experience in drawing or coding, so it's been a steep learning curve to say the least.

Anyway, what I've got so far is just one ferry, but I will eventually be extending it to an entire set, all based off of the WSF fleet. I started off with the largest class of ferries, the Jumbo MkII Class, mostly as a proof of concept to make sure I can actually do this.

I've halved the passenger capacity of the actual ferry to 1,250 to make it a little more reasonable for OpenTTD, although I still think that makes it the biggest ferry available (correct me if I'm wrong here). Aside from that it's pretty basic, I won't do anything fancy like waves/loaded states/etc until I'm a little further into it, and I kind of know what I'm doing. I plan to start around the mid 19th century with steam ships and work through the most historically significant ferries up to present day. I might even add some other stuff to keep it interesting, but we'll see where I go.

So, if anyone has any feedback on my first bit of progress I would be grateful, especially if I'm doing something wrong. 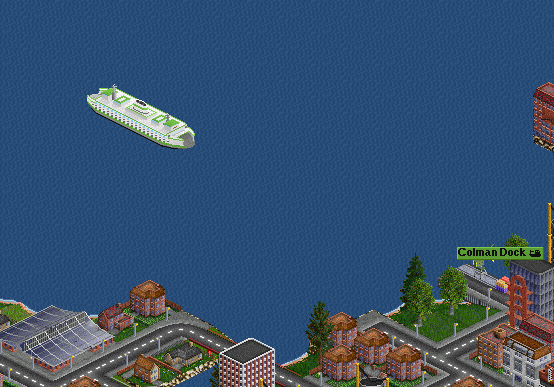 by Quast65
Very interesting!!
Every addition to make this game more enjoyable is very welcome and I personally missed more different types of passengercarriers. So this is very welcome. I'll try your grf out later today, but a small remark from the picture you posted: The ship needs some texturing, it would be nice if the sides are more shaded. And the green also may be a tad darker, it looks too bright compaired to the reallife paintscheme.

And a suggestion for later, what about some passengerliners/cruiseships?

Again, keep it up and welcome to the developersworld

And a small tool to help, here is a pallete with the available colors in TT

by kamnet
The most important thing: I can tell that it is a ferry. Great start, even without the shading! May your future be bright and prosperous!

by Katve
I dont know about shading or GRF coding, but I can say that I like first ferry and this would be very good set for busy routes with these bigger ferries. Keep going!

by SwissFan91
Really good work. Maybe some texture to distinguish what the big grey tongue is on the back/front?

by Bob_Mackenzie
Having blown up the sprite and taken a good looks it certainly is shaded and very well drawn. Having said that the side facing us should be tad darker than the roof, the same colour as you've done the "sticky-up bits" on the roof

In any case its going in to my next game

by Quast65
Played with it a bit and indeed it's great! And it has some nice texturing, which I couldn't see from the picture that was posted above.

But still some remarks. The overall paintscheme of the ship seems too bright to me, maybe use some darker tones of white, especially for the shaded sides and the greens could look better when they are darker. And more importantly... I think it is too big. It's a full tile wide now and that causes glitching troubles with some other maritime features (see example below), so maybe scale it down a bit, I know that means losing some details, but I think it will be better in game.

And furthermore, I cant wait for more ships like this! I'm currently working on new-object tiles for cargo harbours, but I would also like to make some stuff like ferry on/off ramps for passengerterminals, which will be very suitable for ships like this.

by andythenorth
It's a nice ship

Might save the need to add some WSF ships to FISH

It's too big, you will get clipping and flickering issues, in depot, and often whilst the game is drawing the sprite.
It will also overlap canal and lock and river sprites.

This is the largest ferry in FISH at the moment, it has no obvious clipping issues (although it will overlap coasts, riverbanks etc when turning). Larger ships in FISH definitely have issues.

by Quast65
Is it not an option to incorporate these upcoming ships into FISH? Would save another GRF-slot. As I have almost filled up all the available grf-slots in my game

by Andrew350
Wow, thanks everyone for the replies

I realized after putting it in-game myself it looked a little too bright, especially compared to other ships, which is certainly something I can fix. I was also unsure about the shading, but perhaps if I darken the ship down a bit the shading will stand out more. I also completely missed the fact I didn't shade the bottom part that faces you the same as the rest, but now that it's been pointed out, it's obvious. A set of fresh eyes is what's needed sometimes I guess

As for the size, I didn't really have any template to draw from, so I just kind of eyeballed the largest freighter from FISH and figured that was about as big as I should go. The sizes were just arbitrary "oh, that looks close enough" measurements, so I could certainly scale it down a bit

It seems that the width is the biggest issue, so maybe I'll narrow it down a little, which might actually make it look more realistic since the top deck is a little wide right now. I'm not sure how difficult that will be without redrawing the whole thing, so I'll have to mess around with some tools to try and make it work.

Also, in regards to the green being too light, I was very limited in choice of colors in the palette. I used the four shades of green that are separated near the bottom, which seemed like the closest choice aside from the 2nd company color. Which leads me to a question: Do you have to specifically activate 2cc in order for those colors to work? As in, would I be safe using them for a regular color, without the user being able to switch it? If I could that would be very helpful, since there are many more shades of that green.

Again, thanks all for the comments, it's important I get this stuff right before I have 10 ships done. Although, it's not like anything's happening at a blazing fast speed anyway

PS: Is anyone else having trouble with the forum lately? Seems like every other time I come here now the page just stops loading and I have to wait like 10 minutes to get back on. Took almost 30 minutes and 3 revisits to get this post up

Luckily I copied it each time just in case...but still.

by FooBar
2cc green needs to be enabled in the code to work, so you can safely use that as a normal green range of colours.

by andythenorth
I would use the company colours as intended, i.e show the player's colour. It's not realistic, but makes nicer gameplay

For the case where you want a realistic WSF livery, a player can choose in-game for ships to use one of the three green company colours.

by Andrew350
That is very true, since I'm switching to the 2cc green anyway, I might as well allow custom colors.

by Pingaware
I'd just like to echo everyone's praise. A very accomplished first effort, even if it is slightly too bright. I'd also agree about some more shading being needed for the rear ramp. But still - really looking forward to some more stuff from you Andrew!

by Andrew350
Alright, so I've finally got the changes done. I've cropped 4-5 pixels off each view so hopefully it won't have such bad clipping issues, though I could only test it on the locks, so if it's still really bad let me know. It's definitely better, but may still be a hair too big. I've also darkened it and switched over to 2cc green, so you can experiment with different colors if for some reason you don't want the standard green (although the green color looks better now). It looks ugly in some colors (namely white), but most should work okay (I like it in blue personally

Any comments/suggestions welcome, but I think I'm going to move on to the next boat for a while so I don't get bored with it 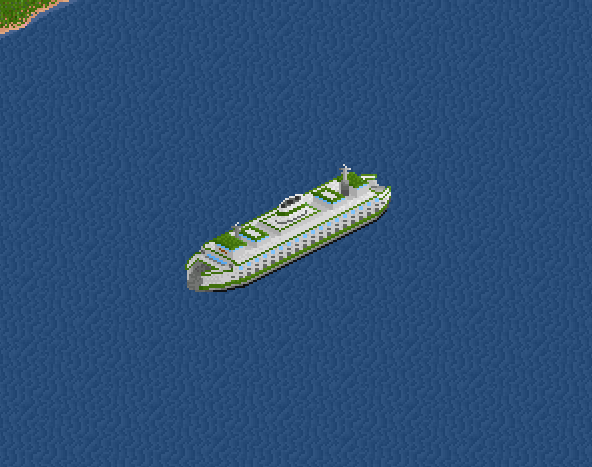 by Quast65
I think you've done a great job! There are sometimes minor glitches with the far side in docks or ports, but these are not disturbing. Hardly noticable in normal gameplay. 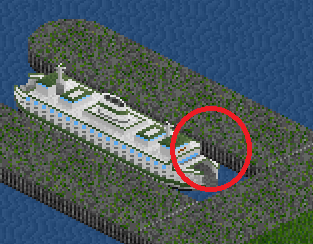 And the colors look great now! So keep up the great work!

A bit off topic, but I think there are a lot of shiplovers visiting this thread and they might have the answer. I have some idea's for ports for these kind of ships. But there are some issues with the way ships behave in ports when they are leaving. They dont turn on the spot but move into the harbour first. Is there a way to solve this that they just turn on the spot? 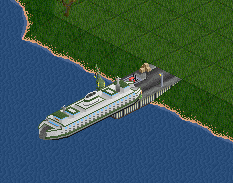 by andythenorth
Assuming the blue shapes are windows, use purple not blue 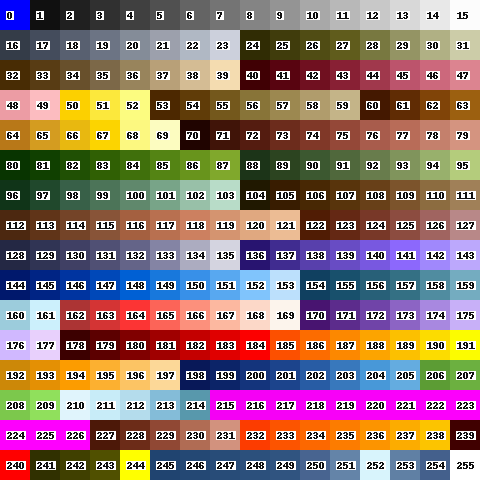 by Andrew350
The blue shapes are indeed windows, I missed the fact they should be purple. I did a quickie recolor of them to see how it looked with the purple, and to be honest it looks odd to me. Maybe that's just because I got used to the blue though, and they probably need more work. In any case, I'll be sure to do it correctly from the start on the next one 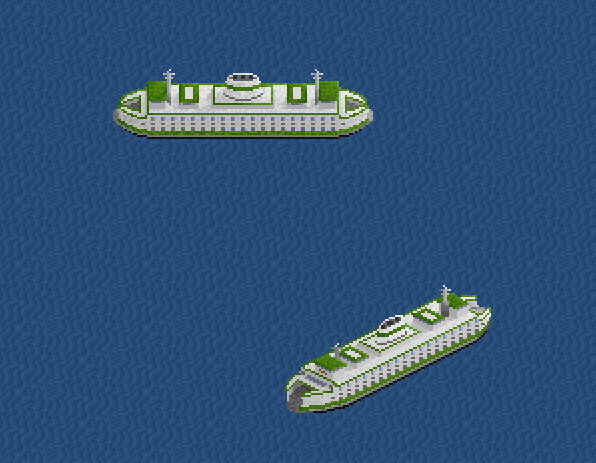 Quast65 wrote:A bit off topic, but I think there are a lot of shiplovers visiting this thread and they might have the answer. I have some idea's for ports for these kind of ships. But there are some issues with the way ships behave in ports when they are leaving. They dont turn on the spot but move into the harbour first. Is there a way to solve this that they just turn on the spot?

This also bothers me, though I obviously don't have a solution to it. The best thing that can happen here I think would be to get NewGRF Airports going, and modify that to also work for harbors as some have suggested. That way ports as a whole could operate better (multiple slips, etc.). Of course, it sounds like it will be a while before (if?) that happens, so maybe there's a more immediate solution.

by Andrew350
Rainy day today left me with some spare time, so I whipped out a ship

I couldn't find any clipping issues this time, at least with default graphics, so hopefully it won't need much tweaking. But let me know if there's any big problems/suggestions for improvement.

A few more ships and I might have something worthy of an actual release. In the meantime, enjoy!