Still problems with Special Masonry Modular Depots and you seem to have 4 duplicates when using
Special Metal Modular Depots PLUS 1 Metal & Masonry Depot combined, SEE picture for both.

Plus you don't have the same choice for both sets of depots.

The other MAIN Problem is when using station GUI as the thumbnails are small you don't know which
one you are selecting.
Top

Thanks for posting these.

Nickel Plate: I'm sorry, I forgot about the issue with the incorrect ground-sprites, does it only happen with Maglev, or also with Monorail? As for why the selection of sets is different, the metal sheds have flat roofs, so its easier to visually blend a half tile sprite with it's neighbor. The majority of those tiles are actually redundant, you can create A LOT of arrangements using only the metal sheds that duplicate the masonry equivalents ('float tile'). I am afraid that adding masonry equivalents for all of the metal sheds could make the set even more confusing to users, but If you want them I certainly can add them. I was actually thinking of cutting back the number of metal sheds instead. As for the duplicates, I do not see them when using normal rail, so perhaps it has to do with the maglev ground-sprites being messed up (maybe a taller shed is being drawn instead of a ground-sprite). Hopefully that will get resolved when I figure out how to fix ground-sprites for other rail types.

As fr the GUI, It is definitely a problem. Because I made the set, I know what each name refers to, but for others, it's going to be a steep learning curve. I don't think there is any way to fix the thumbnail problem, other than trunk getting a re sizable preview window. The best solution would be a more intuitive naming system and/or a thorough tutorial or explanation on-line somewhere. I would be happy to have anyone's suggestions or help in this matter. I thought that the improve station GUI patch would help, but it actually severely messes up A LOT of the tles for some reason. I will have to ask in that thread to see what might be going on.


Kamnet: can you further explain your problem in the first picture? Are you trying to use a regular shed instead of the entry tile, or is the problem that the entry tile has the CC louvers whereas the standard shed doesn't? As for the clipping issue, I didn't touch the bounding boxes for roundhouse tiles when I tried fixing things earlier, as I was afraid of messing up thee way they are drawn over each other. It turns out the boxes were seriously incorrect for all roundhouse tiles, so I will have to adjust that now (see picture).

As for including the depots, as far as I can tell, the only way to do it would be to either creat my own railtype grf that you have to use with the set, or convince author or popular railtype grfs to include my depots and have them activated by parameter or checking to see if MLSS is active. I think the latter is better, as opposed to making people use my rails (also I am sure there would be even more problems with me trying to code a complete track set). I can put together a stand-alone masonry depot only grf for you later tonight if you'd like in the meantime.

Thanks to everyone who has been patient with me here - I still have no idea what I am doing when it comes to coding this stuff, and most of what I am doing is best classified as cargo cult programming - not really understanding the underlying workings of what I am trying to do. If anyone wants to help with the coding side, I would really appreciate it. Currently it seems there still isn't enough interest in the set to get more than one person working on it.

By the way, can anyone tell me how to use nforenum? The grf now has a couple thousand sprites all told, and renumbering them by hand every time I add something or make a mistake often takes up a great deal of the time I spend coding things.

I have posted another picture of depot orientation.

The depots circled in red are Maglav but are showing INCORRECT graphic.

Actually, in that picture, all of the maglev sheds are incorrect. They appear to be using a random sprite as the groundsprite, instead of the specified one. For the life of me, I cannot figure out why this is. Anyone watching this thread who might know whats going on here, please chime in, as I am at a loss. I am thinking that I might have to just remove the groundsprites from these tiles and try to mock up the effect with two grey areas on the regular sprites, leaving a gap for the track to show through.

As to Kamnet's issue, it should be ameliorated in the below version, all common sense arrangements should work, but clipping errors can still occur in some weird cases. Let me now how it looks.

supermop wrote:Kamnet: can you further explain your problem in the first picture? Are you trying to use a regular shed instead of the entry tile, or is the problem that the entry tile has the CC louvers whereas the standard shed doesn't? 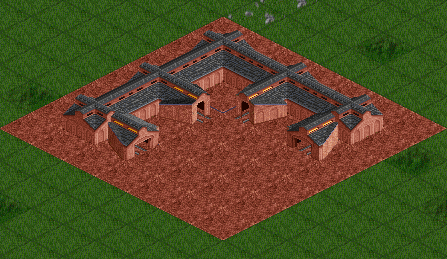 The height is actually the same, but the length is different. Because the Rotunda tile is actually bigger than a tile, the 'narrow" ends of the wedge shaped pieces do not go all of the way to the edge of the tile, so what you are seeing is a gap of a few pixels.

People were talking about depot on irc today, so I thought I would shaare what I have been drawing the last couple of days...

These still will have a few more details added to them, and will be actual depots rather than MLSS tiles, to be added via railtype newGrf. As far as I know, train depots do not use CC so i did not use any, but if someone could correct me here, I would appreciate it.

The other day I saw a Depot-GRF that fits with your sheds. But now I can't find it anymore. Can you help me with that?

I made a metal shed depot, that you can find on the first page of the MLSS release thread, I think it is in the second or third post.

Well making some gradual steps towards 0.3.0

not looking so good so far...

Decided to start over completely with this. The nfo file was so big I could not keep track of where to even start to fix all of the problems that had come up. Unfortunately, I am now essentially learning nfo all over again due to nml not supporting stations.

I have excised all of the 'yard' tiles, and reduced the number of special shed tiles so that I can focus on getting a grf with the basic idea that simply works, with no glaring errors. I also got rid of the red brick pavement because it just looks bad. I have switched to using separate .pcx files with a standard template, which helps a lot. Unfortunately, I do not know of any similar way to handle the nfo itself. Is there a way to code several small nfo files and then have grfcodec assemble them together?

Currently I have this grf with basic sheds, but it just shows the default station tile for each type. not sure whats wrong there as the code is lifted out of a part of my old grf that did work. I know the sprite numbers are incorrect, but I thought grfcodec could fix that now on its own?

Can anyone tell me why this works (old grf):

In the 2nd example you´re defining 4 properties, not 2.

Today a new version of the grf is ready! As mentioned above, it has been rewritten from scratch, so it is not going to be compatible with previous versions. I have split off all of the 'Yard' elements, as I think they might work better in a separate grf. There are now four 'eras' of building to choose, all of which are always available. An early 19th century style called 'Pre-modern' the same as the older 'Masonry' style; a late 19th century concrete frame with brick wall style called 'Early Modern', in the same style as my large roundhouse; a mid-20th century metal sided style called 'modern', the same as my original metal sheds; and a later 20th century panel sided style with gabled or butterfly roofs called 'post-modern'. 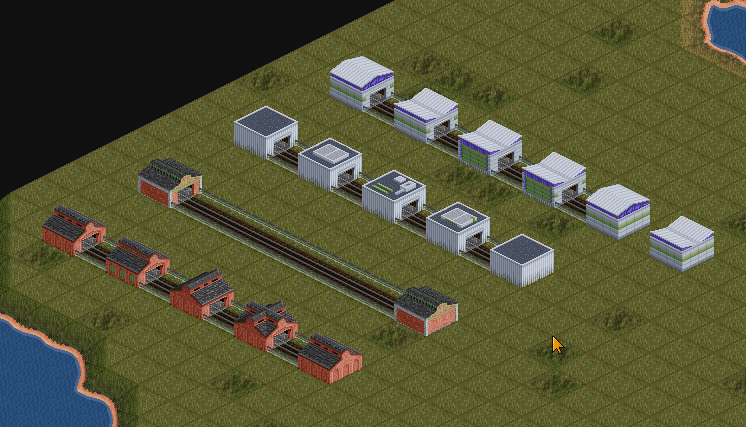 
You can combine various tiles together to get more variety out of your motive power shops. For example, the parapet on the modern shed is at the same height as the clerestory on the post modern shed, and the regular and butterfly roofs can be combined as seen below:

A Shop built out of the new tiles:


By the way, I am open to suggestions for better tile names!

Ok, The bounding boxes were all messed up so here is a new version.

Any suggestions for naming or things that need fixing?