The improved is much better, nice work!

I miss the contrast of the wheels, but it's my opinion, I draw in a different style.
And on the straight up view why the left rear light is black? And shouldn't the back windows of the cab be hidden by the tank?

Nice work, good to see some work on this. Like I said before, I cant wait till I can start playing with this (when its in a playable state). Too bad you couldn't add a engine refit to the refit options, because as far as I know, some truck makers offer certain trucks with different engines as an option (like a 250HP, 300HP, 400HP, etc)

Will you be limiting the road train length to three trailers? I hope you can make them a little longer.

I found this on Wikipedia...http://en.wikipedia.org/wiki/Road_train (I'm sure you've seen this already, but anyway, hope it helps.) 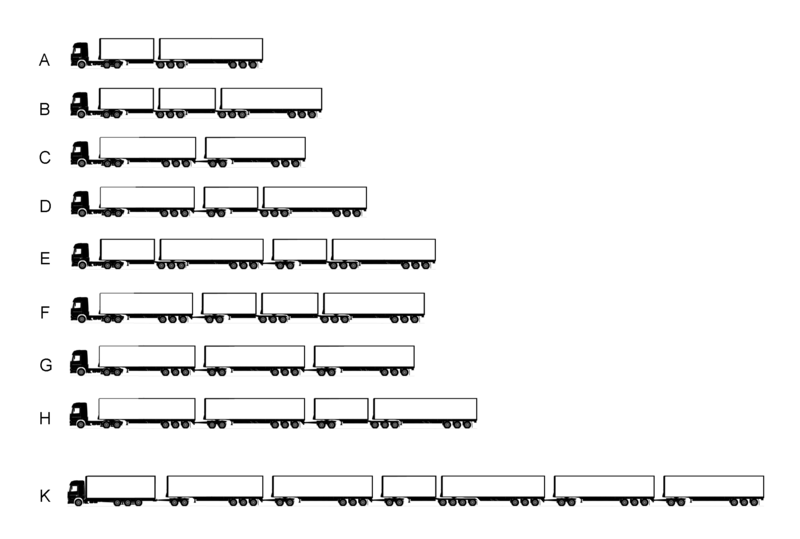 C is a double road train. A "Pocket road train" is similar, but with shorter trailers and dolly drawbar.

F is an ABB Quad.

K represents the largest road trains operating in Australia, and therefore, the world. Called a "Powertrain" or a "Body and six", these machines operate at the Granites gold mine in the western Northern Territory, and are used in place of 200t dump trucks, because of the distances involved on the haul run. A 600 hp (450 kW) 19 L (1,200 cu in) Cummins engine powers the prime mover, whilst a 400 hp (300 kW) Cummins engine is installed in the rear trailer of the B-double, driving through an automatic transmission, giving a total of 1,000 hp (750 kW). Weights of 460 t (453 long tons; 507 short tons) are achieved with ore loading in side-tipper bodies on a 100 km (62 mi) round trip. As these trucks operate on private property, they are not subject to governed weight and length rulings, but instead are used in the most efficient way possible.

There's nothing like a deadline to hone the concentration.

Captain Rand wrote:Will you be limiting the road train length to three trailers?

perhaps a better replacement for the "roadtrain" is the "ecocombi" a.k.a. "eurocombi"

a 25.25m long articulated truck with weight of maximum 50 tonnes instead of the normal 40 tonnes (1 ton = 1000kg). Designed for transport between industrial areas. it saves about 30% fuel because you need lesser trucks and you save costs by using less drivers. there are combinations from A tm G, with F and G almost never being used. i would recommend them for container transport. 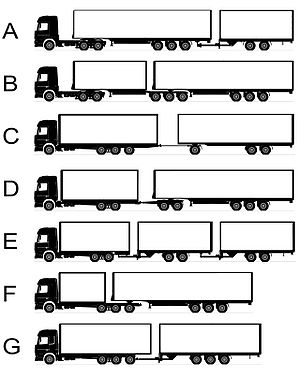 P.S. i would like to join the development team, however i do not have any coding skills

We have a couple of hundred link-trailers at my job, and here in Denmark the max weight with a 3 axle tractor in front is 60tons
TDH
Top

then I must be talking about my homeland (the Netherlands), where just standard trucks are limited to 50 tons. with exceptions for agricultural vehicles (combines etc.) and vehicles used on building sites

Is this set still progressing? It's been such a while, and I really am looking foward to seeing these road trains to haul ore from my mines which always overflow

I mean, do you request help? I could draw you some road trains for BANDIT once in a while

3 axle truck in 2CC that ca be described as either North American or Australian. I haven't a name of a real life model off of this truck
rt1.PNG (2.62 KiB) Viewed 2597 times

Yeah it seems the set is kinda dead for now... but it seems that Andy has other things to do in life since it seems that FIRS and FISH are slowing down and HEQS hasn't had any updates in a loooooong time.

I really hope that Andy can get this set back in order, I really want to see some 18-wheelers hauling ass across the rockies and around towns speeding along on highways like the 401 or 404 around Toronto

Hans Kruzer wrote:Is this set still progressing? It's been such a while, and I really am looking foward to seeing these road trains to haul ore from my mines which always overflow

Those sprites are pretty neat. The set is on hold right now. There's no harm in posting sprites here. I like the generic long-nose truck - I prefer vehicles 'inspired by...' instead of 'realistic'

Alrighty then, less pressure on me to get sprites done. I'll post something in my free time. Oooh look its snowing outside

Indeed, I can't wait to see those tanker b-doubles that are so common around Toronto mocked in OTTD

I've seen so many types of doubles on the 401 and around Industrial areas of Oshawa and Ajax, like Silo Doubles which I figured where carrying dry cement in bulk, or perhaps grain or dry chemicals. Another type I see often especially around major road construction are hopper doubles, though typically the second hopper is much smaller and towed by a long weird A beam style hitch.

EDIT : BTW, Andy, though I really hope this set has a good amount of North American styled "rat-nose" trucks, I'm wondering... will the set contain some of the heavy haulers of Europe, Oceania and Asia? If theres any trucks based on real life ones it might be nice to have flags like the 2cc set, just for show mostly.

Hey, sorry if I bumped this thread by accident, but I was just wondering when the first version is gonna be released. I really wanna see some big rigs running the road. Would also be nice for this set to include a black Trans Am followed by a black semi, know what I'm saying?

I'll definitely use BANDIT if it's ever released, but in the meanwhile I've been enjoying playing with some of the articulated vehicles in the well-hidden Long Vehicles v5, Hungarian Truck Set and Russian MAZ truck set. Very nicely drawn, beautiful sets.
Do you like drones, quadcopters & flying toys? Check out Drone Strike Force!

Any thoughts of reviving development, especially now that we can have proper highways in OpenTTD?
Do you like drones, quadcopters & flying toys? Check out Drone Strike Force!

kamnet wrote: ↑
22 Aug 2019 04:23
Any thoughts of reviving development, especially now that we can have proper highways in OpenTTD?