agentw4b wrote:The problem of altitude is mainly in "Fishing Harbor" and "Bulk Terminal".


I don't think the ports are intended to exist anywhere other than the ocean coast - as they do not make sense as inland / highland industries.

Hi, can someone give me a working example of how the cargo payment rates are calculated in FIRS?

agentw4b wrote:The problem of altitude is mainly in "Fishing Harbor" and "Bulk Terminal".

It's not a FIRS design choice to limit these industries, it's a side effect of how OpenTTD works.

Can you require a water tile, rather than a coast tile, and then not build on it?
He's like, some kind of OpenTTD developer.
Top

agentw4b wrote:The authors of the CZTR wrote somewhere that they wanted to work on a 32-bit version, but eventually they would make their own FIRS-like economy.

Yes that's true. We are making our new industry GRF. And we have a similar problem with industry on water. Oil rigs etc can build only on the water. But there are some cases when the industry is built on the coast. So Oil rig has 2 tile on the water and 2 on the land (size 2x2). We have to check input conditions (maybe minimum distance by coast tiles). Industries like ports we don't program yet. But I think that it will be funny too.

Be aware, it is perfectly possible to make feature requests for NewGRF, via the github issue tracker (you can ignore the bug reporting template!)

Be clear and concise in what you want to achieve, along with some background, and be prepared to make simple test-case NewGRFs.
He's like, some kind of OpenTTD developer.
Top

peter1138 wrote:Can you require a water tile, rather than a coast tile, and then not build on it? 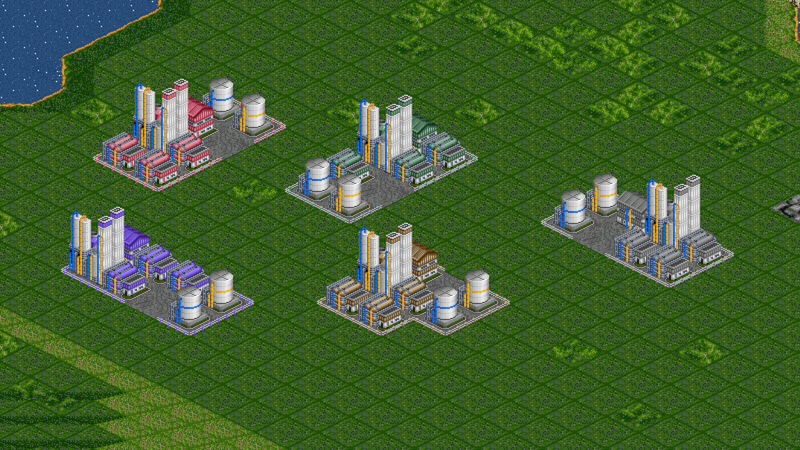 The slag grinding plant in FIRS 3 was poor. Let's fix that

Work so far on the new one. 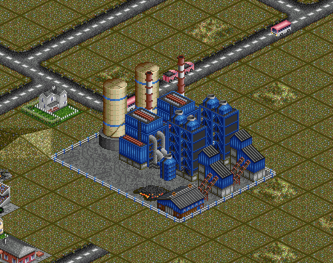 The old one for comparisating. 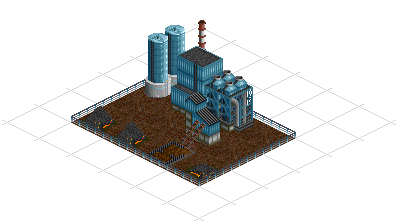 I have placed this in OpenTTD problems also, but here's the problem and I think it's an FIRS issue:

I am running a large map with FIRS extreme cargo setting. Everything goes well except for one "bug" with a lime kiln. Even though production of farm supplies is constantly high, the delivery rate of the station where they are fetched is dropping at a certain point in time when I leave the game running for roughly 1,5 years without any changes or new builds. This causes trains to load extremely slow and therefore jam the station. Before this kicks in, one supplier train with coal is enough to fill two trains with farm supplies, now more than two coal trans are needed to fill one farm supply train.

As an additional craziness the delivery rate of chemicals produced at the same plant and loaded at the same station remains as high as ever. This effect only applies to this very lime kiln (but it's the only in the game). All other industries producing farm supplies are not affected at all.

I have tried to replace the lime kiln by blowing it up in the scenario editor and rebuild it in the game - no changes. I also removed rebuilt the station in question and rerouted the farm supply trains to another station where the same effect occurred. WTF?

To put some numbers to this, I have also built a new lime kiln and connected all the trains to this one. The same effect occurs though. Before 1990, a train of 420 tons of coal lets the kiln produce and deliver 165 crates of farm supplies. From 1.1.1990, the rating of the station's farm supplies drops from 83% constantly down to 26 %, even though I made sure there is always a train loading cargo and no farm supplies are left waiting on the platform.

Now the same 420-ton coal train lets the kiln deliver only 74 crates to the fetching station.

However, the production numbers of the kiln itself do not drop. Chemicals are the same before and after 1990, as well as any other industry producing farm supplies - so it's most likely not the trains.

Just discovered, that from 1994 the harbour has the same issue

I am completely clueless. Of course I can sell the superfluous trains to keep the station running, but where are all farm supplies gone? They are needed elsewhere.

Thanks in advance!
Top

Can you share your savegame? I can try looking at it in a debugger to try figuring out why the station rating is calculated to that.

Edit: I see you already did in the other thread you posted about this.

Edit 2: Explanation posted over in other thread:

jfs wrote:I think I may have an explanation for why the rating is dropping. Some of the supplies are being brought to the station Berggiesshübel South where it gets unloaded for transfer onto trucks. Around May 1990 the amount of Farm Supplies waiting at this station grows massively, I haven't tried to figure out exactly why that is but presumably more is being delivered than the trucks can handle.


Based on my reading of the code, this is an intentional mechanic, which is probably intended to prevent circumventing the station rating system at producing industry stations, just by moving the cargo to another "holding" station. If cargo from the producing industry's station waiting at another station still affect the rating for the producing station negatively, there is no gain from just moving the cargo somewhere else to pretend you're handling it.

In other words, it's not a FIRS problem, it's an intentional game mechanic that's difficult to discover.
Top

More accurately, I haven't tested Extreme, or looked to see if changes elsewhere in FIRS affect Extreme. All the industry production code has been rewritten to use the newest OpenTTD production API, and there may be unfinished work or bugs with that.

Where have you put the downloaded grf?