I'm wondering that, is it possible to code the Dirt roads to Tropical Climate? They would fit in there Perfectly!
Top

Oz wrote:'Kay, gang. Do you guys have any idea how friggin' hard it is to draw dirt using the TT palette? I redrew the dirt roads, shown below, like three different times.

Yea! They kinda bring this to mind:

[scene cuts to kid running up the stairs of the front porch and entering the farm house letting the screen door slam]
Kid: Pa! Pa! there's a dust cloud coming up the road and its making one heck of a noise!
Pa: [running out the door to look] Its ok son, It's just your uncle Jeb in his new fangled model T automobile.

I think that means they're done.

Oz wrote:Also, I modified the brick roads. Added some tire/dirt/oil marks, and browned it down a bit, as requested. Done deal? If so, I can start working on incorporating the bricks into the bus and truck terminals, as well as the other climates. And, I'd like to get working on the tram tracks.

Color is 'bout right but ... hmm ... I'm not to sure about the lines down the middle of the road. I don't think they gussied up their roads too much back then, less'n its one of them new fangled cityfolk inventions. Also that line might interfere with the tram tracks.
wallyweb on tt-forums: Screenshots - Projects - Releases
wallyweb on Simuscape: Projects - Releases
Other Stuff: TTDPatch 2.6 "Nightly" download - cirdan's OpenTTD branch (New Map Features)
Screenshot Of The Month Contest Winner: August 2015 - Tied May 2016 - January 2018 - December 2018 - May 2019
Top

Those new roads are looking good; although the change between the city roads (brick) to urban roads (dirt) looks a bit too drastic.

Why not, the new roads would go into the US Roads Set, which caters for all climates.
Top

OzTransLtd wrote:Those new roads are looking good; although the change between the city roads (brick) to urban roads (dirt) looks a bit too drastic.

One heck of a bump too! I know from experience. My spine still hurts. 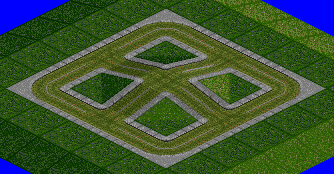 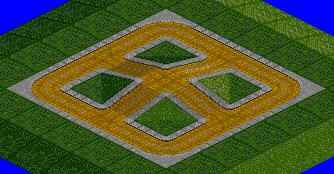 Maybe change the pavement to another color and here we have a road replacement for tropic!

I love your artwork.
NOTE: Consider fixing shadows. Light direction is from East, SouthEast. Seems your pavement is shadowed wrong way.
http://members.fortunecity.com/gamesart
"If no one is a fool I am also a fool." -The TTD maniac.

Maybe change the pavement to another color and here we have a road replacement for tropic!

OzTrans mentioned something about 1945 being the surface changeover date for the CanSet, so might as well be consistent.

What about a three-surface scheme where, say, 1920-1935 we have bricks/dirt, 1936-1965 concrete/tarmac, and 1966-present we have asphalt? We have the flexability of having multiple surface types, so we may as well make use of it, and put OzTrans to work.
Canadian Stations Set North American City Set North American Roads Set North American Industry Set Tropic Refurbishment Set
Top

Bring it on ... I believe my contribution and time spent implementing it would be insignificant compared to you artists.

Anyway, I think it is time to upload the US Roads Set v0.86 as I haven't heard of any problems.

@krtaylor : below is the WIN and DOS version 0.86 ready to upload on your website. You may want to amend the readme though.

There is a minor update : I have added a second parameter, if set to 1, then city roads will be shown in desert towns in sub-tropical climate. Works in TTDPatch only and you must have ttdpbasew.grf as first entry in your newgrf.cfg (although the file need only be in the directory otherwise).

I have also updated GrfCrawler; there was no entry before !!
Top

OK, I've posted it to the US set website. I also updated the readme but am not at all sure it's accurate, particularly regarding the credits. Please read it and post necessary changes. Thanks for all your hard work!

I don't handle the GRFCrawler entries, so I didn't update the entry there for US Roads.
Development Projects Site:
http://www.as-st.com/ttd
Japan, American Transition, Planeset, and Project Generic Stations available there
Top

I'll take a credit for improved graphics, and Skidd13 supplied us with the monorail/maglev level crossings.

The readme looks fine, except for credits :

I'm not quite sure about Aegir; has anything of his work been added/updated ? I only added/updated sprites supplied by lifeblood and Oz.
Top

I've had nothing to do with this project. Sofar.

I have made some modifications to ns_37's bridge sprites which he was creating for use in the original US road set, but they are not a part of the current US road set.

I can provide the original graphics of ns_37's with the changed bridges if you people want.

But either way, nothing to do with me.
Former NewGRF Coder and Sprite Artist

Aegir wrote:I've had nothing to do with this project. Sofar. I have made some modifications to ns_37's bridge sprites which he was creating for use in the original US road set, but they are not a part of the current US road set. ...

Understood ... the bridges by NS37 will be added/updated in the US Roads Set at a later date, because they (rail bridges) will also have to be included in the Canadian Trains Set v0.3 for compatibility reasons.

These bridges will then be available, if both the US Road and Canadian Trains sets are played.
Top

... or could they be coded as a bridge set that gets activate by the USset roads. I think id rather that than be firced to use a trainset. Then if someone wanted to they cold give them new road surfaces aswell for the other roadsets.
Formerly known as r0b0t_b0y2003, robotboy, roboboy and beclawat. The best place to get the most recent nightly builds of TTDPatch is: http://roboboy.users.tt-forums.net/TTDPatch/nightlies/
Top

robotboy wrote:... or could they be coded as a bridge set that gets activated by the USset roads. ...

The idea behind updated bridges is not to create a new bridge set. We want to update the narrow gauge rail bridges for the Canadian Trains Set. In order to do that, we must also update the standard gauge rail and road bridges because far too many bridge parts are shared and it is a very difficult job to match everything up.

Now we would like to provide updated rail bridges in the Canadian Trains Set and the matching road bridges will go into the US Roads Set. This then links the 2 sets and that is why the updated bridges will only be available when both sets are activated.
Top

I use always this road set, i love it

Could it had some new road tunnels ??

Digitalfox wrote: ... Could it have some new road tunnels ?? Like the ttrs3 ones ...

No problems, if you or someone else draws them ...
Top

I'm waiting on Oz to sort out work at his end. Although, I suppose I could get the ball rolling on the brick and dirt roads...