Back to work! Maybe what I said about "20 trucks by Christmas" was too overconfident, well now I guess we at least be famous by summer.

I used one of Andy's smaller tractors, the forklifts, and a light bulldozer that I made. They were rather small, and I would say they would be seen more on a normal semi flatbed.
The large bulldozer however, is very huge, in fact if you look closely, you can see how heavy it is on my poor low-bed trailers. 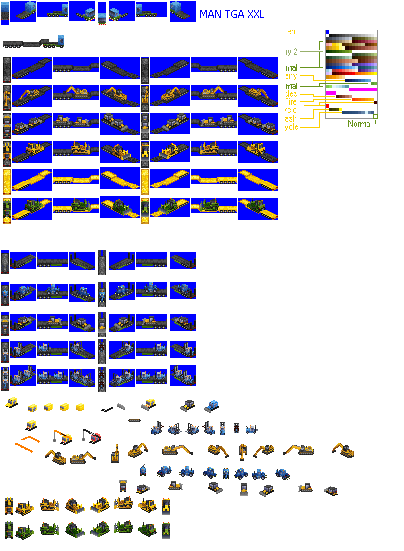 Sorry for the lack of updates, I am currently busy with other stuff unrelated to TTDX. In the upcoming week I'll try to finally integrate the sprites for the semitrailers that Hans already showed in mid-December (plus the semitrailers with the forklift/machinery), afterwards I'll then check out the XXL stuff. The sprites look very promising, but currently I have no idea how to balance that XXL heavyweight transporter against the other trucks.

One important sidenote: GermanRV is not licensed as GPL, therefore reusing sprites from other sets that are GPL'ed (like the ones AndyTheNorth posted) is only possible if we can make sure that we get that licensing stuff right.
Railway building and signalling guide | German Road Vehicle Set
Top

Welcome back, Glad to hear your still alive and kicking

Well in the case of liscensing issues, I suppose I'll take a break from the flatbeds and lowbeds.

The next most interesting truck beside the XXL is probably the Gigaliner, something I will get started on soon! Anyways I did ask once, if we could make the Gigaliner a 3-axle truck. I think there's already quite a lot of 2 axle semis in the game, a 3 axle is also somewhat common in Germany, and the Gigaliner being exceptionally heavier would be suitable..
Tschüß!
Top

What license is this set?

One of the advantages of pre-defined licenses such as GPL or Creative Commons is that the author/artist can avoid being pestered with usage requests. That does not preclude the author/artist from granting a unique license where he or she feels such is appropriate. The only exception would be if the artist/author had previously granted an exclusive license.
wallyweb on tt-forums: Screenshots - Projects - Releases
wallyweb on Simuscape: Projects - Releases
Other Stuff: TTDPatch 2.6 "Nightly" download - cirdan's OpenTTD branch (New Map Features)
Screenshot Of The Month Contest Winner: August 2015 - Tied May 2016 - January 2018 - December 2018 - May 2019
Top

wallyweb wrote:One of the advantages of pre-defined licenses such as GPL or Creative Commons is that the author/artist can avoid being pestered with usage requests.

I am massively +1 to this. Sprites I've drawn have been used under different licenses, but it's boring discussing it.

Hans Kruzer wrote:The next most interesting truck beside the XXL is probably the Gigaliner, something I will get started on soon! Anyways I did ask once, if we could make the Gigaliner a 3-axle truck. I think there's already quite a lot of 2 axle semis in the game, a 3 axle is also somewhat common in Germany, and the Gigaliner being exceptionally heavier would be suitable..

The open question here is how to actually do that GigaLiner. In fact, GigaLiner is a very specific form of truck configuration, consisting of a two-axle semi plus extra trailer (see http://de.wikipedia.org/wiki/Gigaliner#Niedersachsen for an explanation in German).

In general, these types of extra long vehicles are quite uncommon in Germany, it has been included back in the set plans roughly around 2007 when there was quite some media attention to it. So far there have only been lots of test projects, but no widespread usage in Germany. Having said that, I would simply reuse some sprites from some other model of the set and recombine them to create a suitable truck. It also does not have to have graphics for all types of freight, basically these trucks are aiming at providing more volume for low-density goods - which means just a closed truck transporting goods. I would therefore suggest not to spend too much time on creating new sprites for this truck, but instead to focus on older types.
Railway building and signalling guide | German Road Vehicle Set
Top

I finally ran out of excuses for not working on the set, so I just released the next alpha version. It only contains three new sets of sprites for the MAN TGX based on those created by HansKruzer: one for bulk cargo that is to be hidden under a blanket (i.e. things like grain), a silo semitrailer to be used for powderized goods and a flatbed with machinery (using a machine created by AndyTheNorth). Personally, I now consider the TGX finished concerning the basic cargos and will focus on coding the XXL truck next.
Railway building and signalling guide | German Road Vehicle Set
Top

However, while playing, I did notice a small issue concerning the machinery-goods truck. It seems the machines are censored

Well, there was nothing censored, I just made a stupid mistake when compiling the grf. The problem has already been solved in the newest alpha that I just uploaded to the usual location.
Railway building and signalling guide | German Road Vehicle Set
Top

Well I have played but it arises the question, is FIRS supporteed by this set and ECS as well? Or is, as these trucks are only developing, that the priority is getting the default cargoes right? For I had noticed that 80% of FIRS cargoes are transported in the generic box trailer

But, I am well satisfied, and can ignore such a minor thing.

Anyways, more sprites: if you can tell which is the MB Axor apart from the MAN F2000, then I did a splendid job

Today I finally coded the TGA XXL heavy weight transporter. It only transports goods (maybe some ECS/FIRS cargos as well, haven't checked that) and only comes with one set of sprites using some construction vehicle as load. I am not entirely happy with that truck yet: The trailer is pretty huge, so turning looks rather awkward, the construction vehicle does not fit very nicely (the size of the trailer seems to be off a bit in the different views) and I have yet to decide about the actual vehicle stats, especially the capacity. It seems the truck could possibly be used to transport train engines, which would result in a capacity of > 80t, so this will be a bit difficult to get a balanced gameplay. Anyway, the newest alpha version contains the first coded version to take a look and try it in the game to check for yourself.

Concerning the support for ECS/FIRS: The set is basically compatible and prepared to be used with these cargos, but the graphics used for display can of course be improved. However, I want to focus on having a fully playable set with all trucks in place before adding specifics for ECS/FIRS cargo.
Railway building and signalling guide | German Road Vehicle Set
Top

Apologies for my extremely loooong absence, but I return now! I did post sprites 2 posts above of an Axor and F2000, if you have completely forgotten about them

Is the set still alive? Its too good to abandon now, because I will just keep chasing you until you reply

Hans Kruzer wrote:Is the set still alive? Its too good to abandon now, because I will just keep chasing you until you reply

Oh please do that, I would love to see it even if not finished, almost there.

there are public alpha versions, you know...
You might not exactly be interested in Ferion, but if you are, have fun

Hans Kruzer wrote:Is the set still alive? Its too good to abandon now, because I will just keep chasing you until you reply

The set is alive (for certain definitions of "alive"), but there hasn't been any progress for months as I was busy with other work.

I'm aware of that, I'm using the latest alpha 17

Oooh, trucks carrying construction equipment is cool. Could those be used as a creative representation of Engineering and Manufacturing Supplies?
Top

Sabre_Justice wrote:Oooh, trucks carrying construction equipment is cool. Could those be used as a creative representation of Engineering and Manufacturing Supplies?

When all the trucks are added the next version of the set will. Currently it is a bunch of test versions, so the cargo looks are not as important for now. You just have to wait a bit, let us finish all the trucks before dealing with that

Uwe and Foobar. What can be the reason that these two sets are conflicting each other after staring new game?