Is she the singer that sings the song "Heart of Glass"

Been exploring ideas for the street parking and if to shrink them a bit.

The images in middle is the new idea .. so you can compare the version I made already is the outer ones.

I looked on Google Earth for ideas .. many around Sydney and some country towns the rear end of the vehicles are close to the road and some even over hang a bit like in the image fridaemon uploaded. Maybe Perverted Monkey's blondie drove that car

Also the pathway isn't very wide usually just barely enough room for 2 people to walk side by side.

Many also had a fence. Some had a island every so far along the parking area and the island some had street lighting and some had trees.

maybe you could add traffic islands with trees between them ?
Top

Do you mean between multi lane road similar to the Dutch Road Objects where they have fake lanes.? Or the islands every so far apart along the car parking area.

You just gave me a idea .. Dutch Road objects has the objects designed for multi lane roads. Including some to go between lanes. A person might be able to do something similar and have island car parking

. The hard part is usually just 1 row of cars between the 2 roads ,, but ave to use a whole tile so probably could be 2 rows of cars.

maybe something like this and the wide concrete area could be lawns, gardens, trees and lighting. Another idea for the Things-To-Do-List.

Do you mean between multi lane road similar to the Dutch Road Objects where they have fake lanes.? Or the islands every so far apart along the car parking area.

just something like this... just a quick change in your picture

I think I will re-do all the street parkings as mentioned other posts .. move the cars a bit closer to the road and make pathway narrower so more like the ones I seen in Google earth. See if can add some islands and people as well.

The overlap roads I did before, I could make them like the image above and have center parking as well.

Biggest problem is room .. the AuzCarParksAndSubwayOverlays set is getting full. Maybe the Car Parks and the Subway Overlaps should be 2 separate object sets.

See if I can start on these in a few days time .. before I start like to make sure I got the right idea and design this time.

Need to put my thinking cap on for a bit longer while decide how do the street car parks.

This image shows the ones I did so far on 4 of the roads from my set which are same size and width as the RattRoads set.
Top one is the Highway Road and next is the Modern Bitumen roads .. both with bicycle lanes. Unfortunately the overlap to the car parking covers those bicycle lanes.

Bottom 2 are the Basic Bitumen and the Improved Bitumen which the street parking fits nicely.

Same results when tested with RattRoads .. not sure on other road sets.

Before I start on any more work to the street parking .. get some ideas how to make them to suit several road types.

Still experimenting with the Street CarParks so they fit better near roads.

Previous ones was good, but felt the parked cars was to far from the roadway.

Next how to use the same car parkes with the roads with bicycle lanes. Was thinking need 2 separate car parks .. one set for normal roads and one set for those with the bicycle lane. So came up with this idea this evening.

Add dotted lines to the parking spaces that way it should suit both road types. 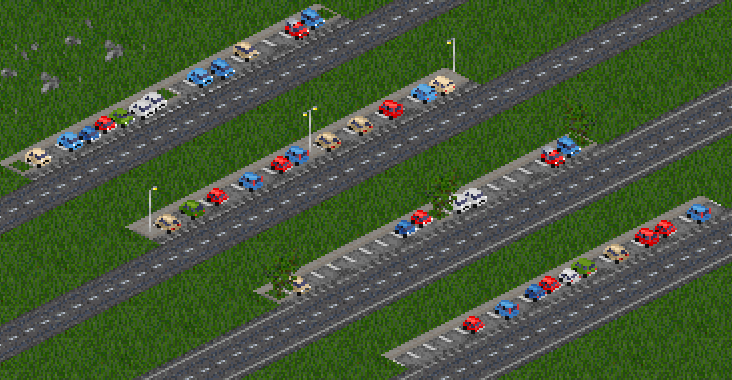 Whats new with these car parks

* Cars closer to the road.
* Pathway narrower.
* Normal with out any islands, lights and trees.
* With lighting
* With trees.
* With grass islands.

Also the cars can park rear to kerb or nose to kerb.

Asked some time ago to make another transmission power pole .. Finally got around to it and here the result. 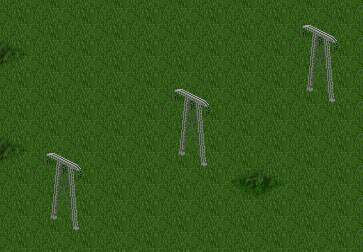 Now see if I can do more to the street parking over the next few days. Trouble is it forcast rain here for the next week and not easy to do paving and road work in the rain

Most of those would be good as non-track station tiles and some as Industries.

These be good as non tracks station.
Fire department, Police Station, City/Town Hall, Schools, Hospital, maybe even the taxi ranks. (I think Total Town Replacement has many of those already but be good to have some non-tracks as well).

Some of those shops of John Fister and fridaemon would go well as non-tracks too in the middle of towns.

Graveyards they go in the dead center of towns

Garbage disposal be ok as a industry .. but need something in the towns to create garbage .. wonder if can make a Industry with just people in a park as they great at creating garbage.

recycling yard / junkyard FIRS has a Industry of these.

The street parking has me busy at moment but will look into those ideas when get chance.

Australia had funeral trains to cemetery and on Sundays had special services there. People use to be dying to have a ride on those trains,
but not any more. Probably will make a town look different if had object cemetery pieces.

In the mean time the screenshot competition this month is called "YOU MUST BELIEVE IN SPRING!" so I made a few objects for it.

Not sure about your country but there are some towns and city streets in Australia that are tree lined. So though I make a set and see how they look. 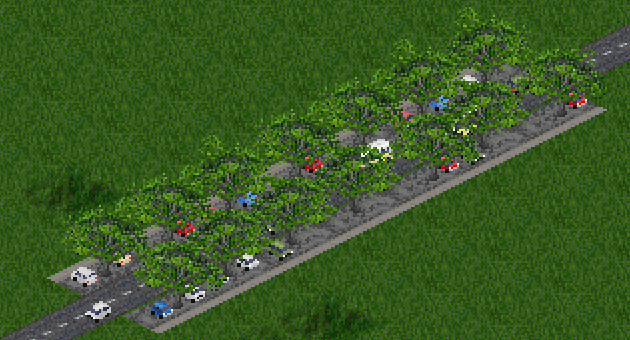 Still adding new street parkings .. done the 90 degree parkings. Be many more days before I finish the rest. I wait and see how many be in set and decide if I add them to this set or put them in a new object set.

An idea I have .. the street parkings that I already in the 'AuzCarParksAndSubwayOverlays' I think of removing the overlaps so that these will align with wide roads, especially Industry Roads. That way they will look like empolyees and customer parking at Industry sites. Whatcha think?

GarryG wrote: ↑12 Jan 2021 10:24 In the mean time the screenshot competition this month is called "YOU MUST BELIEVE IN SPRING!" so I made a few objects for it.

Add a few pink pixels to the trees and spring is here!

GarryG wrote: ↑12 Jan 2021 10:24 In the mean time the screenshot competition this month is called "YOU MUST BELIEVE IN SPRING!" so I made a few objects for it.

Add a few pink pixels to the trees and spring is here!

I was not going to show you this till later as like to design a few more flowering trees.

These are jacaranda trees. In Australia the City of Grafton has these types of trees aligning many of the trees and when they come out in flower they have a Jacaranda Festival towards end of October and early November. 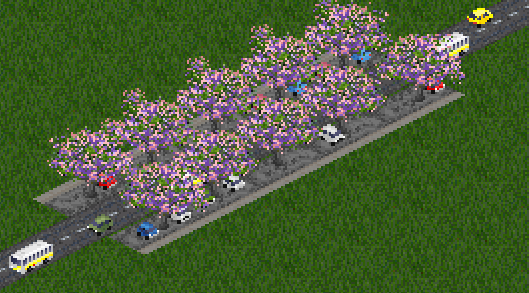 Guess you can have it now.

Looks like I better put the street parking on hold for a while and make some more flowering trees in streets and for use in parks.

Here some more that might help you design this month screenshot competition.

Flowering hedges and some trees.

The pink hedge suppose to be Camelias, white is Alyssum and mixed is mixed.
The trees are Jacandra and the ones with red flowers based on a tree in Philippines called "Sakura". In Australia has a similar tree in a place called Grafton City called a Flame Tree.

Very pretty!
Would you mind posting the source graphics of those trees?
I think I would like those in some of my GRFs

Quast65 wrote: ↑14 Jan 2021 09:55 Very pretty!
Would you mind posting the source graphics of those trees?
I think I would like those in some of my GRFs

Just be careful around those flowers in case of bees.

As extra thanks, I did a white/yellow blossom recolor and also added the winterstages (I dont think there was one for the little tree, the big one is from original OpenGFX) 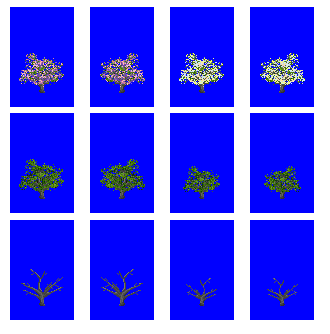