* Fixed the heights to creeks and river objects.
* Added the Weir.

* Fixed height issues with the landscape pieces. many I had set at 16 when should only been 1.

* Added the new sets of Tents for camping.

Just a warning to let you know of a minor problem, but might take me a day or so to fix.

The AuzWaterObjects that I release bottom of last page .. I put too many slope aware coastal shore line tiles. I don't need that many so I be reducing it. It still usable, just a newer one with some files removed will be released as soon as I able to.

In AuzWaterObjects made some changes .. again.

Added: :AuzWater: Coastal Slopes .. this has 3 Coastal Slope Aware tiles (which are also climate aware) and those 6 coastal objects I did before.

This a before shot in Sub-tropic. 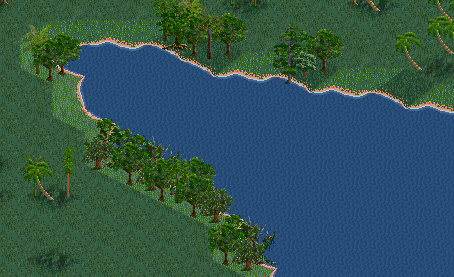 When you use the coastal pieces they remove the sand and waves at the bottom of the slopes and makes a straight edge and adds the curved shore piece in some locations.

Along the straight edges you can add which ever design you like. There are narrow shore lines and wide shore lines. Some shown in this image with the swamps. 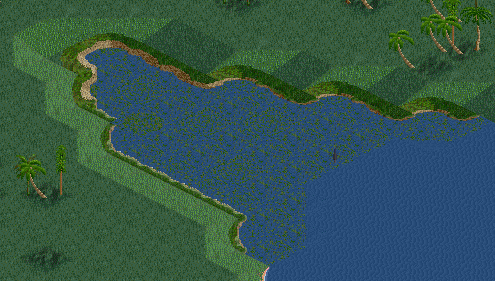 Any how, have a try and see what you think (unknown if it will interfere with saved games). Suggestions appreciated.

I seem to have fixed that problem that STD found. As mentioned the code "zextent" I forgot to change the object heights in a lot of the objects. Not just n AuzWaterObjects, but also in AuzCreekAndDrainObjects, AuzFarmObjects and in AuzLandscapeObjects. So all these been repairs and I will upload the fixed version here very soon.

Since those sets needed repairs I also transferred the objects from AuzObjectAddOns into their respective sets. For now you DO NOT need AuzObjectAddOns to be loaded in a game.

* Fixed water tile heights
* Added new coastal shore lines so that the water and lake objects I made can be used in the natural waters that load when you start a game.
* Changed so that swamp tiles have their own menu called "AusSwamp: Swamp Water"
* The Mangrove and Willow Trees are still in this set, but will be found in the menu "AuzLandscape: Forests"

The original problem seems to have been solved. Bridge supports remain if they are positioned at the height of the second tile. And if you make a bridge from the surface or from the first tile, the supports disappear by themselves. And at one bridge they do not disappear for some reason under any condition of construction over water objects.

I decided to check on a different set of bridges - Total Bridge Renewal Set Version 1.2. The problem disappeared by itself. As a result, I found out that you need to check water objects and Auz Bridge Replacement.

A very funny situation turned out. I didn't think at first that a set of bridges might conflict with a set of water objects in terms of textures.

Thank you for another update of the sets. I looked at everything added to them with pleasure.
Regards STD.

STD wrote: ↑
05 May 2020 17:32
The original problem seems to have been solved. Bridge supports remain if they are positioned at the height of the second tile. And if you make a bridge from the surface or from the first tile, the supports disappear by themselves. And at one bridge they do not disappear for some reason under any condition of construction over water objects.

Found out it is a problem with the bridges. Especially those with pylon/post supports.

Looks like I have some graphics work to do ..

Hope you and other enjoy .. if there is any combination you like to build but I haven't included the pieces let me know ans see if I can add them as well.

But for next few days looks like I be bridging.

STD wrote: ↑
05 May 2020 17:32
The original problem seems to have been solved. Bridge supports remain if they are positioned at the height of the second tile. And if you make a bridge from the surface or from the first tile, the supports disappear by themselves. And at one bridge they do not disappear for some reason under any condition of construction over water objects.

Found out it is a problem with the bridges. Especially those with pylon/post supports.

Looks like I have some graphics work to do ..

Hope you and other enjoy .. if there is any combination you like to build but I haven't included the pieces let me know ans see if I can add them as well.

But for next few days looks like I be bridging.

STD wrote: I will wait for the new version of bridges to test in the game .

Did the Morpeth Bridge today. Slow process as also making some alterations to some designs as well.

Slight delay to the bridges while I work on another idea.

Much credit goes to "Kruemelchen" the maker of "WaterWayRoad set". He has given me permission to use his boats to add to the object sets.

And I thank "temporal8" for the idea as he suggested "Picturesque Town" for the next screenshot competition.

Anyway came up with this idea.

Adding stairs and boats to the Canals for Romazoon Objects set. Also made object of some of the boats that can be placed on rivers, lakes and the deep blue sea.

This image give you an idea what I doing.

Not finished yet forgot to put the landing on the stairs in the canals with no boats. And some boats have some flashing lights to fix.

I added the landing to the stairs and fixed the Christmas lights on the boats.

Also experimented with a idea of Romazoon Canals without the fences and lights and also used the retaining walls from the "ogfx-landscape" and got this result. 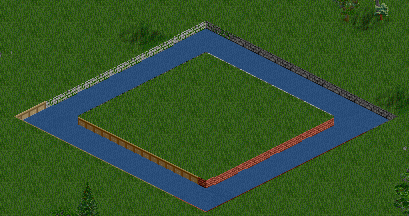 I wondering if the walls with moss if I only have moss half way up the walls to look like tidal marks?

The 4 of them can be joined and should also join Romazoon Canal set (but I have not tested that yet).

The first canal has slopes to match, but the other 3 (brick, stone and stone with moss) do not have slope section.

The Canals shown in previous post and above can be found in "Rom: Canal Add-Ons" .. but wondering if the canals shown in image should be added to AuzCreekAndDrainObjects?

The boats that can go on rivers, lakes and the deep blue see will be found in "AuzWater: Ships and Boats".

Have a try and let me know what you think. 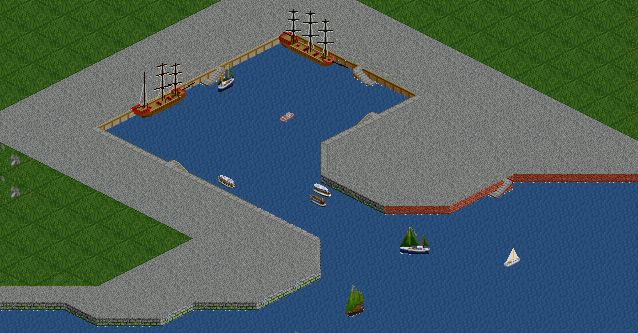 There are 4 types of Harbour Walls. Walls that match the Canal Walls in the Romazoon Object set, and 3 from the "ogfx-landscape" . brick, stone and stone with moss walls.

There are 2 sets of each as second set has the stairs for smaller boats to dock. Hope to change the concrete on the second lots to include lawns.

You will find it in the Object Selection Menu under the name of "AuzWater: Harbours".

Can u make these with already existing concrete tiles?

Depends what sets you talking about?

How do these look.

I changed the concrete to a darker colour that same as FIRS and most industries. 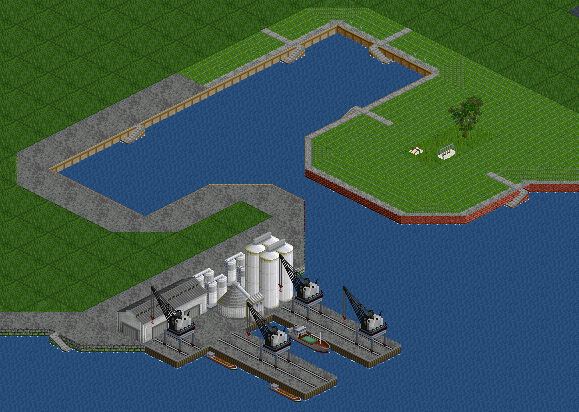 There is 4 choices of guess you can call them Industrial Harbour Walls .. and 4 Parks Harbour Walls (I plan to add a few more pieces so can make the parks nicer).

They are all slope aware (auto lay).

The stairs are now a separate tile.

Have a try and if have any suggestions please let me know.

Just a reminded .. the AuzObjectAddOns file is basically a test area for what I been making. The objects in this set will be transferred to their respective object sets once happy with them.

Today change the concrete to the darker colour and added a few more to the Harbours and some canal pieces.

Separated the new canals into their own menu called "AuzWater: Canals"

Might need to do same to the grass and path ways or maybe separate the Industry Harbour and the Park Harbour. Got a bit more to add so decide that later.

The trees in pic are from CZTR Tree Set.

This most likely be the last upload of the AuzObjectAddOns with the Canals and Harbour pieces.

The "Rom: Canal Add-Ons" are add-ons for the Romazoon Object set which is on Bananas. I'm in the process making a separate file for his new additions .. most likely be called "RomazoonAddOns".

The rest in this set will be transferred to AuzWaterObjects.

All object sets will be re-released soon as had to fix some height errors in them. Hope to have those errors all fixed soon.

Experimenting with idea to add some Industry Objects to the Industry Harbour.

It will take me many days and more to add what I planning.

This will give you an idea. 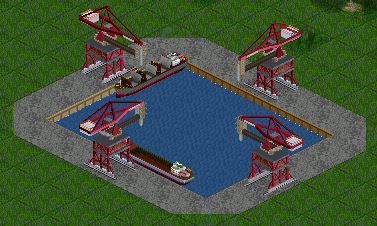 Because I have 4 different Harbour walls, will need to make 4 lots of each Crane and other items I add.

Because I hope to add these, the idea transferring items from the AuzObjectsAddOns to AuzWaterObjects will not happen as I will have too many pieces. So I will leave them in the "AuzObjectsAddOns" or maybe call it "AuzWaterAddOns". We shall see.

Just the "Rom: Canal Add Ons" have been transferred to their own home "RomazoonAddOns"

Going to replace one of the Industry Harbour walls I done with same style used in FIRS with the Bulk Terminals, Ports and other water based Industries.

Many many moons ago AndytheNorth sent me this image from DanMack to see if I can use it in my projects. 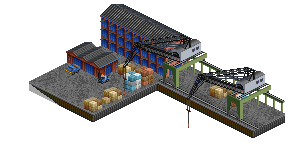 I think I can use it very nicely in the object harbours along with bits and pieces from the Bulk Terminal, Port and Fishing Harbours.

Not sure if I will do those huge cranes now as I think items to match the water Industries be the way to go for now.