Here the updated AuzFenceObjects and also the source.

Found a few other misalignments with some other sloped fences such as the "Rail Wire Fences", "Wood Paling Fences" and the "Wire Farm Fences".

Do you still have plans to add some more power poles to your set?
Top

Yep .. but just finding it frustrating getting them right. When I start getting frustrated with them I quit for a whilw some times days and some times months, than try again until I get somewhere with them.

Only done these so far and some communication towers. Took me ages to get them this good, but feel they could be better. 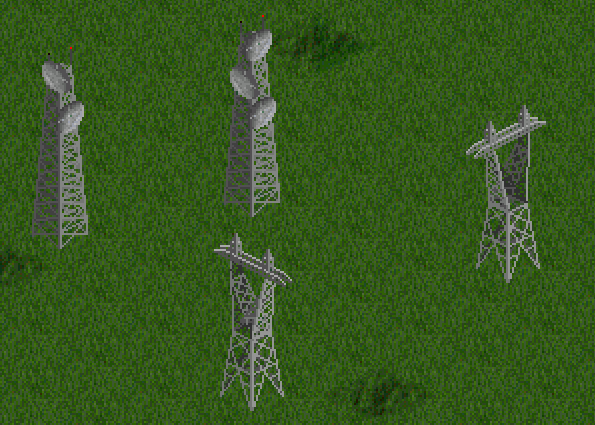 Was going to wait till get chance do a few more, but not sure when that will be, so let you try those in image.

Any one like the source see if they can make some tower welcome to use.

Hi all, made some changes to AuzElectricAndTelephoneObjects.

Added 2 telephone Poles and re-installed the power poles I had with Wires. Now you have a choice with or without the wires.
There is 5 choices in the Object Selections.

.
These are the 2 new Telephone Poles I added without wires. Hope to do a few more.

Here the updated file. WARNING it most likely will cause problems with saved games using previous versions of AuzElectricAndTelephoneObjects.

If I add more with wires .. how do we do the slopes. Not all slopes be same over a certain distance. Even if only goes up 1 slope over a 6 tile distance how would I make the wires so look ok no matter what the slopes look like?

Flat terrain not a problem .. but how do I do these for slopes. I made a scale some time ago when trying to make a scenario. Based on Railway wagons 2 per tile and they average out at 20 m in length in real so that would make a tile 40 meters.

H-Frame for instance if based on 240 meters apart that be 6 tiles between poles. Start a game and see the different slopes in a 6 tile range and let me know how to make the wires to compensate for all those different angles. With 6 tiles the slopes could rise any thing up to 6 high.

Curiosity got the better of me.

Been experimenting adding wires to a set of Power Poles and a set of Telephone Poles using those with the most arms.
The 4 Arm Power Pole will look some like this on level ground.

And the Telephone Pole with 6 arms would look like this.

The templates the yellow tile is the main tile and the green would be overlaps.

But looking at changing these a bit. Make #1 set with 2 overlaps of wires instead of one. #2 have no overlaps as overlaps in a southerly direction often glitch. #3 is just wires and change the overlap to go only in a northerly direction. See if can make a 2 tile and a 3 tile of #3. Hope you understand that.

Experimented with adding wires to some of those that not had wires.

The 1, 2, 3 and 4 arm power poles been making some with wires. The 1 arm and 4 arm can be seen here with slope sections.

So far I have done:
* All 4 poles shown at bottom of image are 1 tile with wires each side the arms. Have not done them with just wires one side as yet. These can be used on flat and slope 1 high.
* The rest have 1 tile overlap.

Question if I can successfully make these with wires .. should I eventually remove the no-wired ones?

Trying a new idea to suit those who don't want wires and those who do. Also hope it will reduce the number of pieces needed to make this idea work.

You can space the poles where you want them in game.

Then if you want the wires, these will be in there own "Object Selection Menu" but only wires, no poles. You just place the wires between the poles.

A sample is with this image. All the poles were placed first .. non of them had wires attached. Then I put the wires between the poles between some of them.

I might have taken on more then I can chew, but will see what happens over the next several days.

As I change and add new objects I will add them to this new file. It will work with the other versions just some items you will have them in 2 different manuals if you use both sets.

Only 3 in menu so far in this set:

The normal type power poles like in this image. There are NO H-Frames, High Towers and Telephone Poles yet.

There are poles with lights and also junctions.
I made junction wire for the junction power pole with 1 cross arm going in the South-West to North-East (as in image) direction with 1, 2,3 and 4 cross arm junctions going in north-west to south-east directions.

Have not done the junction wires for the junction pieces with 2, 3 and 4 travel in North-West to South-East directions and not sure if I will as these will be difficult.

Have not done any wires for north-south and east-west directions yet. They probably not really needed.

Want to test for me .. Remember this set will change a lot with new additions when I get chance to work on them.

Still experimenting with the Power Poles and wires.

Added some small poles that take just 2 wires. These I hope will look good going to farm building and industries some like in the image.

Also in Purchase Menus added some writing and arrows to describe which was they go. 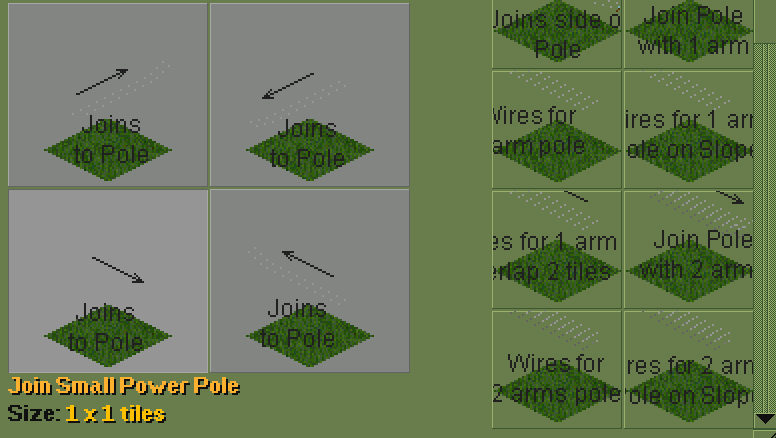 Yep .. but just finding it frustrating getting them right. When I start getting frustrated with them I quit for a whilw some times days and some times months, than try again until I get somewhere with them.

Only done these so far and some communication towers. Took me ages to get them this good, but feel they could be better.
Different Poles3.png

Was going to wait till get chance do a few more, but not sure when that will be, so let you try those in image.

Any one like the source see if they can make some tower welcome to use.

This pole is amazing! Thanks a lot Garry!
Top

Glad you like them, but as mentioned I think they can be improved.

This what on the drawing board for them.

Changed the graphics to the H-Frame Towers and also the new Lattice Tower . 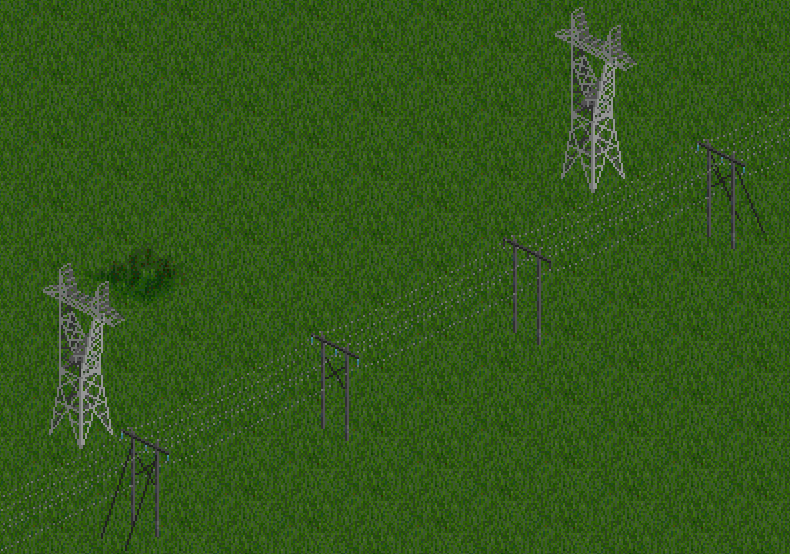 Changed the design to the top of the Lattice Tower .. I think it looks a lot better.
The H-Frame towers changed the pole colours and added the overhead Ground Wires. The poles and wires are separate.

Changed the Object Selection Menu as well so easier to find what looking for. Both poles and wires for a particular type of Power Pole are all in same Selection Menu. 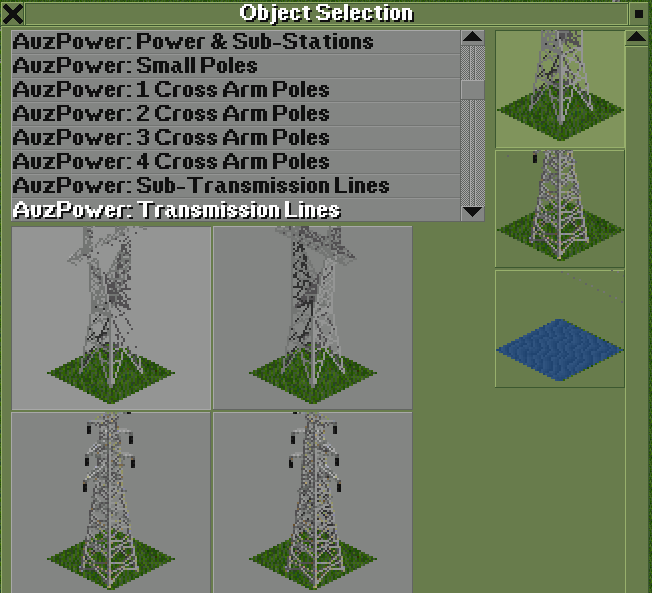 Still a lot to do so if you use this set so until it is finished use with the "AuzElectricAndTelephoneObjects" set.

Had a go at making wires for the new Lattice Tower. 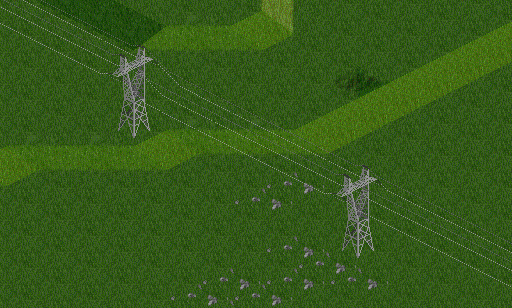 It will go up one slope providing the tower is placed on the slope edge like in image.

The other power poles I done will do the same. If place pole further from edge then wires not join.

Combined serveral Object sets into one. It replaces AuzfarmObjects and AuzIndustryObjects.

Includes objects for Farms and Industries.

AuzFarmAndIndustryObjects.grf it doesn't work for me, I updated the newgrf list but it didn't appear there, any ideas?

temporal8 wrote: ↑
30 Mar 2020 16:10
Hi, Outstanding work as always! AuzFarmAndIndustryObjects.grf it doesn't work for me, I updated the newgrf list but it didn't appear there, any ideas?

Thanks pal, not sure what has happened there. Shall have a look when get chance later today and see if I can figure out what happening.

I intend to release a complete new set of all the objects very soon with some updates.

Been communicating with "Romazoon" and asked if I could separate his work from mine and make it a separate file. But before we do .. he and I just doing a few additions to the set.

This one of the new editions that will be in RomazoonObjects. I made bridges to match the retaining walls than Flogeza and Romazoon done.

temporal8 wrote: ↑
30 Mar 2020 16:10
AuzFarmAndIndustryObjects.grf it doesn't work for me, I updated the newgrf list but it didn't appear there, any ideas?

Not sure why it not working for you as it works for me. Just in case the one I had uploaded before was corrupt here another try see if this one works.

Working on a project today with Romazoon .. adding to the retailing walls he has in his object set so have a variety of style for the water shore lines. These are slope aware so no need to find the correct piece for that particular shore line.

Almost all the graphics in these was done by some one else. Romazoon and I just got the bits and pieces and joined them together. The walls are Flogeza work, the mowed grass is work from Quast65, the Flowers I stole these many years ago from out side the Petrol Station in FIRS 1.4.3 .. don't tell AndytheNorth and those who helped make that version of FIRS. The trees are from ogfx-landscape.

Still hope to add another type before let you have a try.

. Thank you very much (to all those who help to implement all this)

. I am waiting for the appearance of this set to try it in the game

.
By the way. AuzFarmAndIndustryObjects works fine. I have no problems in the game. When I download the next version, I immediately test the game for any errors. For example, as it was earlier with the wires in another set

Here is a few more images what Romazoon and I working on. Some time ago he made some canals and they was scattered and made building the canals a bit difficult. So we changed them a bit. Added a few forgot to do before as well.

To make it easier to build the canal made to sets of auto lay canals. Normally to make this image you would need to select 10 different tiles .. but with autolay just keep clicking where you want them. 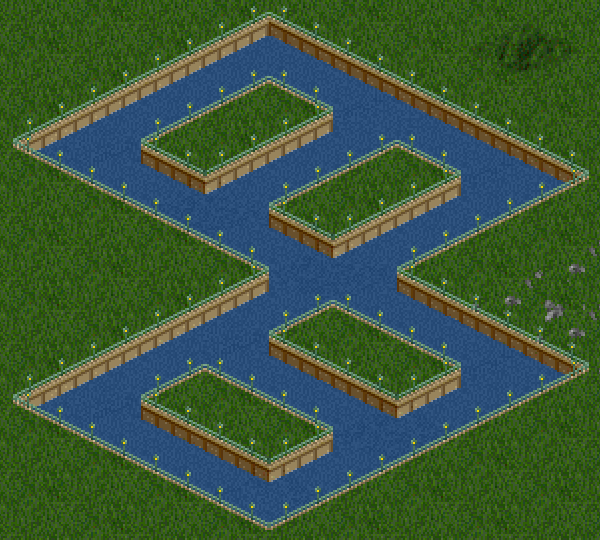 There are 2 auto lay canals. The first can not add extra pieces to as has closed ends.

The second one the ends are open so can add wider canals if like.

Added some water falls to the canals.

As mentioned before the graphics Romazoon and I are using parts of someone else work. These waterfalls courtesy of Kamnet. 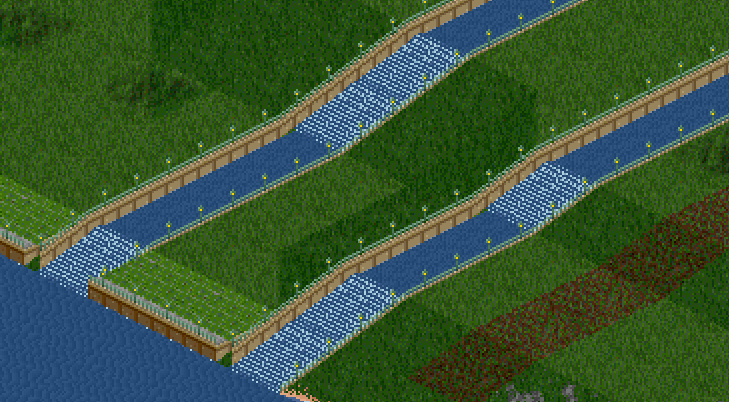 The water falls are part of the auto lay canals, except for the part that joins the Lake which is a separate tile. Intend to make one that will match the Wharves.

In the mean time I guess you like to try these canals.

It only a test file and when I got them to our satisfaction will add to RomazoonObject set.

GarryG wrote: ↑
31 Mar 2020 01:30
Thanks pal, not sure what has happened there. Shall have a look when get chance later today and see if I can figure out what happening.

Thanks, i removed the old AuzFarmObjects.grf from the newgrf folder and solved!