Got an idea for a new feature in TTDPatch? Post it here.

. I loved this game when I bought the original, I played it till I upgraded my system (I think when I started using win95 from DOS, long time ago) and it wouldn't run. I didn't see it again for a decade. When I downloaded it I was AMAZED at all the incredible improvements, you all are incredible. Thank you, thank you, thank you.

I hope I'm not double posting. I searched but I didn't find this suggestion.

Is having express signals/track possible or available? Or would they be called spur signals? I guess what I'm asking is, are there signals that will stop a train from entering a signal block if by doing so it will mean stopping a train running at full speed?

Possibly a priority setting, or a combo light/trigger set up on the express track. ie: if trigger 1 has been passed, and trigger 2 hasn't signal stays red on the spur, but no red hinders the express track thru the block. I've tried to do this with the combo signals, just hasn't worked at all.
Another way would be a delayed light, pausing minimally after the signal block clears, before releasing the spur. In the event of a jam, the delay would allow the express track to clear before the spur proceeds onto the express.

The way it is now, the spur pulls out onto the express track as soon as the block is clear, causing a back up where waiting trains take turns entering the signal block.

As I said earlier, Thank you, thank you!

Guess there's no chance A-Train is out there somewhere that's been given so much effort?
Top 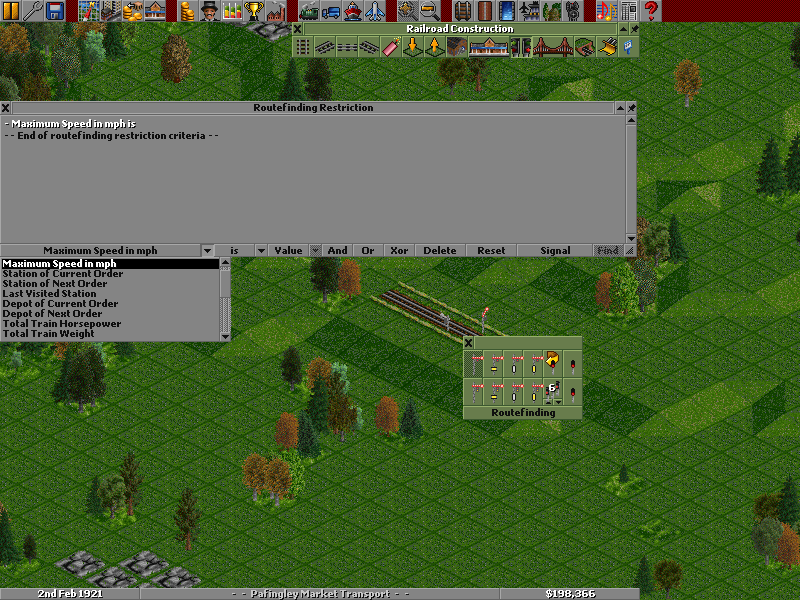 Erm does that routefinding stuff come as default on ttdpatch? I know it isnt int he latest Openttd build. (Yes i can see this is the TTDPatch forum)

Leanden wrote:Erm does that routefinding stuff come as default on ttdpatch?

Yes, with three qualifications:
1. It requires a fairly recent nightly build
2. The tracerestrict switch in the ttdpatch.cfg file must be set to "on".
2. It requires a grf file that provides extra signal graphics.
A good reference to signalling can be found here.


I know it isnt int he latest Openttd build. (Yes i can see this is the TTDPatch forum)

Not a problem ... It was a fair comment offered as a part of your TTDPatch question. Any chance that something offering similar functionality might be available under OpenTTD? Now that would be a good question for the OTTD section of the forums.

There are a few things you could do about this without any changes at all. First, you will solve 99% of traffic problems by creating a 2-(or 4, for both ways) track line in which there are crossovers every few hundred yards. A train can enter on one track, and a train that's already barreling down the line can pass on the other. They can cross between tracks later if need be- say, if a train breaks down, the others will keep going on the other. This system works very well for lines in which trains of different types and speeds are travelling, as you described in the op. You can also make it virtually bullet-proof by adding as many of these tracks as you like.

The second option is obviously to just build a line for slower trains and a line for express, but that pretty much doesn't even solve your original problem.
http://billybobjoepants.blogspot.com/