I have transport giant gold edition with downunder.
Hopefully someone can help me with this as it really does frustrate me.
An example to explain the issue is as follows.

The idea I had was to make a loop between several cities. Lets say 5 cities. City 1 and city 4 are close to fruit farms. All cities have storehouses and are connected via 1 rail network. A route is set to carry the excess fruit from City 1 storehouse to city 2. Any excess delivered goes into the city 2 storehouse. Another train from city 2 picks up any excess fruit from the storehouse and delivers it to city 3. And so on. I could then add eggs to this from say city 2 and meat from cities 4 and 5. Eventually all cities should be receiving all types of goods.
However with this bug the storehouses do not work so I have to set up a route from the farm to each city with is very inefficient.

I do realise this is over explained but too much information is better than not enough.

*Edit*
After testing some different things out it seems the issue is specifically with trains and ships picking up goods from a storehouse. Unfortunately it is not very efficient for horses to be used for goods distribution. I end up with traffic jams.
Top

I guess this is just another tycoon style game destined for the bin.
I don't get why so many companies release these games with bugs and issues and never fix them. It seems its every tycoon style game I have liked has issues.
Top

I doubt you'll still be around or playing for that matter, but anyhow I get around this issue by laying out train cars like the image below. This is using a route between 2 cities with a storehouse at either end.

Well, I hope this helps others who've avoided storehouse distribution centers via trains, you can now have a more fluid rail system. 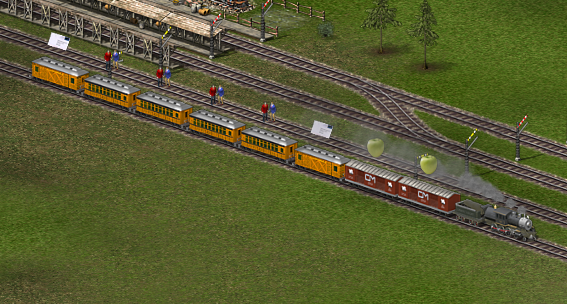