The Widelands Development Team is proud to announce the immediate availability of Widelands Build 20. Widelands is a free, cross-platform economy strategy game in which players control the fate of a small tribe that can grow into a big empire, in a style of play that is unique in the open source world. 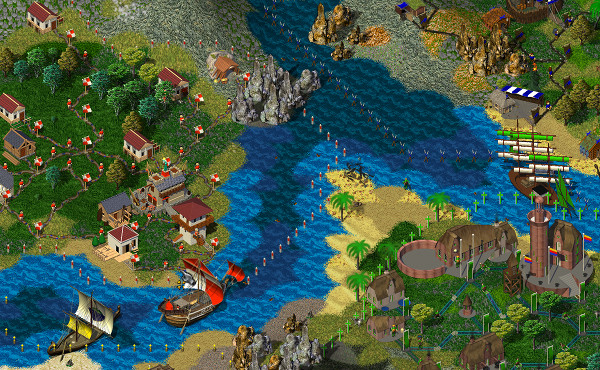 Since the previous release, we have implemented over 400 features, code cleanups and bug fixes. Build 20 features a new tribe – the Frisians – as well as four new campaign scenarios and a new “Barracks” building for recruiting soldiers. Also, the AI has been rewritten to use a genetic algorithm. The user interface comes with new features that make it easier to use, like map zoom, dropdown menus, a new ships list, and improved keyboard navigation. Build 20 also continues the behind the scenes cleanup, polish and modernization that was started with Build 19. There have been additional improvements to the stability and performance, as well as numerous bug-fixes.
Full announcement on Widelands Homepage
Top

Some years ago I've had a big open source craze and Widelands was one of the games I played a lot around that time. Great game, very much captured the spirit of Settlers 2.

Well recommended.
"On the other hand, I have different fingers" -- The rascal formerly known as astath, loathing you and more specifically your religion. Anti-theist, be like it. -- Last.fm -- Official TT-Dave Worley Fan Club -- Good times.

Strangely I've really been wanting to play Settlers 2 again at some point for a while now. Though need an older machine to run it these days.

Did someone just answer my prayers with this game?
My Photography - YouTube
Top

I'm glad I posted this here then. Enjoy