Sure, here's a (sort of) screenshot.

The thing is, it eventually gets trough and connects

Thanks for the help 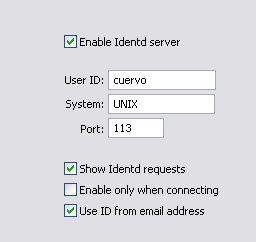 6th Member of the Reciox - The Inner Circle

Can't you connect to another server? Or am I getting the idea wrong?
Official TT-Dave Fan Club

If you're on a LAN, Raven (ie, you have a router of sorts), then you'll need to set up port forwarding to port 113.
Owen Rudge
owenrudge.net | Owen's Transport Tycoon Station | Owen's Locomotion Depot | The Transport Tycoon Wiki
Top

thanks orudge, I'll tell the router's chief engineer to redirect ports to 113.

Regards
6th Member of the Reciox - The Inner Circle

As this seems to be the place to talk about IRC and i couldn't be bothered to make a new topic: Is IRC working atm? Or is it just my internet?

I'm wondering a similar thing at the moment, I suffered a netsplit earlier (about 15:00) and now whenever I try to rejoin #tycoon I am in the channel on my own, is the split still going?

Sometimes splits can last for hours, it basically means the server you are connecting to has lost its connection to the rest. Try joining a different QNet server like multiplay.uk.quakenet.org or waiting for longer.

Just for the record, people:

1. QuakeNet has accidentally G-lined quite a few users during maintenance.

2. In order to connect to QuakeNet, please connect directly to a server. A list of the servers can be found at: http://staff.quakenet.org/servers.phtml

To connect, simply type "/connect <server URL>" into your favourite IRC client.
It's not me in my avatar, it's a time lord!

Time is an illusion. Lunchtime, doubly so.
-Douglas Adams
Top

I think xs4all.nl.quakenet.org is working happily.
We Am De Best

Whats happened to quakenet?
It seems to be completely out.
Last known as: Weirdy
Top

Weirdy wrote:Whats happened to quakenet?
It seems to be completely out.

It happens very rarely that the entire network drops. There's no notion of a network drop on http://www.quakenet.org though, it could've been something on your side too.

A note, #tycoon is likely to be moving to the OFTC IRC network in the coming days (the same network as OpenTTD), primarily due to the fact people are fed up with netsplits and so on on QuakeNet. A post will be made here when that happens. If anyone has any queries or comments regarding this move, please post here.
Owen Rudge
owenrudge.net | Owen's Transport Tycoon Station | Owen's Locomotion Depot | The Transport Tycoon Wiki
Top

OK, we've moved. You can now find us on irc.oftc.net #tycoon. Have fun!

I assume the chat link up in the forumpage does still work?

I miss the netsplits.

orudge wrote:moving to the OFTC IRC network in the coming days (the same network as QuakeNet)

I think he means #openttd.

I decided to write up a little guide on how to get on the new network and what has changed:

1.1 Getting connected
The generic address for OFTC is irc.oftc.net. You will have to tell your IRC client to go there instead of quakenet. You can do this in different ways depending on your client, but most of the time you will get there with either the /server or the /connect commands; look at your IRC client's documentation if you don't know which one to use.
If your client has been set up as the handler for irc:// links (mIRC will in most cases do this), you may also click on [url=irc://irc.oftc.net/tycoon]irc://irc.oftc.net/tycoon[/url] or you may use the chat applet provided by TT-Forums.

1.2 But I've got channels on Quakenet that I want to be in!
That's okay, most clients allow you to connect to more than one server at a time. Again, the commands to do this differ per client. In mIRC, you can use the -m switch to connect to a second server:

In irssi, it is default behavior of /connect to connect to a server without disconnecting from the current ones. Since I have no experience with the other clients, I can't say how to connect to other servers with them, but the documentation is sure to contain more information on the subject

However, we urge most channels that are in some way related to #tycoon to make the move with us! While we won't force anyone, the move has only been made after we were certain that at least a good part of the spin-off channels would make the move with us. You may be interested to know that ChanServ does not have criteria your channel will have to meet in order to have it registered, unlike L. Apart from that, the fact that OFTC is a lot more stable should be more than enough motivation for moving, really.

2. Authentication
While Quakenet has it's Q and L services that allow you to register yourself so you can control a channel or get operator or voice status automatically, OFTC has the NickServ and ChanServ services. These services are certainly similar, but there are a few key differences: 3. Why did we move?
The idea of moving to irc.oftc.net has been floating around for quite some time now, but the actual move never happened because we couldn't really be bothered.
Lately however, Quakenet has seen increasing amounts of net-splits. Net-splits happen when parts of the network get disconnected from other parts of the network, which basically causes a temporary split in the network. People connected to one part of a net-splitted network will not be able to see or talk to people unless those people are on the same part of the network. Because I suck at explaining this stuff properly, go and read up on the topic at wikipedia if you want.
Quakenet has always been plagued by netsplits but lately the amount of times this has happened grew out of hand. This was partially due to maintenance to the servers, but that doesn't make it less annoying.
OFTC is (currently) a smaller network which is mostly used by Open Source projects, including [url=irc://irc.oftc.net/openttd]OpenTTD[/url]. In part because of it's smaller size but in part also due to the fact that OFTC seems to be operated by more competent people, OFTC is a lot more stable.

4. I got banned from #tycoon on quakenet!
If you got banned some time in the past on quakenet, you will still be able to get into the OFTC channel; Unless you've been so much of an annoyance that we've seen fit to ban you on OFTC as well. In essence this means you get a second chance. Don't mess it up because we will ban you again if you've not learned your lesson.
If you're a regular and got banned somewhere around Sunday 13 January, this will probably have happened in order force people to move to the new network. We've banned everyone who had already made the move to OFTC. That way, we can be relatively certain that #tycoon on Quakenet will die out, because all the regulars won't be there any more.
GoneWacko. Making [url=irc://irc.oftc.net/tycoon]#tycoon[/url] sexy and exciting since 1784.
Top

Damn, just as I move from one to the other in the same way a baby horse tries to walk for the first time (I'm sure Aegir and Lachlan enjoyed watching me fart ass around on the new server), the day after, GoneWacko posts all of that. Good info though, shame I connected a day early and looked like a complete newbie

Cheers!
Posted by Raichase. Visit my Flickr! Gallery, Blog (get a feed of everyone at once at Planet TT-Forums).
Raichase - Perfect timing, all the time: [13:37] * Now talking in #tycoon