I'd like to introduce everyone to a project I've been working on called Railway Tycoon.

The game is loosely inspired by the original Railroad Tycoon (1990) game (-yes, waaaay back when), hence the simplistic style, but it's really quite complex under the hood. Anyhow, it's my modern take on the original game but instead of using a game-engine specifically and releasing via the likes of Steam .etc (my coding skills aren't fantastic), I can write javascript to some degree, hence the game is being built to the best of my abilities and runs entirely in the web-browser, much like an old school browser game.

I've spent a lot of time working on this project and I feel the game is in a very playable state... it's definitely not finished, but I offer it here for anyone interested in taking a look. It's a very niche project and one which is very much personal to myself. My inspiration for starting this project comes from fond memories of watching my grandfather play the original version of Railroad Tycoon some 25yrs ago which is ultimately how I became so interested in tycoon games generally.

As the sole developer on this project and being at best an amateur at that, my goal (of which I hope others will share) is to create a timeless railway-only-focused tycoon simulation which is both challenging to play, but can stand the test of time to not become outdated, or boring.

I've no intentions of following any trends or rules that are generally prescribed to game development, and for this reason Railway Tycoon will never become a pay-to-play or pay-to-win game.

There will never be any "coins" or "in-app-purchases". In fact, the popularisation for many games these days to use this as their primary business model is a contributing factor (for at least myself) to why for the most part I simply do not play games at all these days.

The only pay model which shall ever be used throughout the development of this project is one which is based solely on donations in support of the continued and ongoing progress through the Patreon page.

If you do wish to check it out, you can play it for free at:
www.railwaytycoon.co.uk

If you want to watch me play it before checking it out I've also posted a video on YouTube (though skip to about 7mins in for actualy game-play).
https://www.youtube.com/watch?v=ocknpXirCD4

All the best,
Jason
Top

I am not sure what the exact status of the "Railroad Tycoon" trademark is and how litigous its owners are, but if I were you, I'd avoid getting this close to it, both with the name and with the logo design. Especially if you're soliticing donations in the order of magnitude that you are, there's a risk of getting into trouble over this.

If you want to entice people to play your game, you also should offer a landing page with some screenshots and text explaining why your game is worthwhile playing. I've taken a glance at your video but 57 minutes are more time than I am willing to spend. It is also entirely unclear to me why your game is web-based and why I should sign up with it. There is probably a good reason for that, but if you don't communicate this good reason, I personally just am a bit reluctant to sign up.

My blog, which is sometimes about railways | Bulk GPX Viewer on Github
Top

I gave this a shot for about 10 minutes. Five minutes of that was spent trying to figure out the interface and what to do. There's no on-screen guide or anything to help me get started. Eventually I stumbled onto how laying track works. Not having a numpad and having to use the left side of my keyboard was pretty awkward, not being able to use my mouse to point and click where I wanted the track to go felt very cumbersome, but I eventually built some track. Then I tried to build stations, and I kept getting errors that the station wasn't aligned properly or couldn't be built. Then I accidentally discovered how to delete track sections even though I was still in station building mode. So, frustrated, I left.

With that said, kudos on your work! A lot of people really don't even get this far with projects. Keep working on this!
Do you like drones, quadcopters & flying toys? Check out Drone Strike Force!

I just tried to log back in to play, using my registered e-mail address and password, and it's just taking me back to the login screen, no warnings or error messages.
Do you like drones, quadcopters & flying toys? Check out Drone Strike Force!

Thanks above for the comments. Unfortunately I've largely (so far) overlooked the obvious cause of frustration here (how to play it..), as you're not the first to mention this

All track/station/depot/signal building in the game is done so with the keyboard exclusively. If you don't have a numpad, you can use the QWE ASD `ZX keys instead. Both the NUMPAD 5 and keyboard letter "S" (will act as your delete key). You can also delete track using the delete key (if you have one), and this works in all build modes. The was always intended to be played with a full-size keyboard with a numpad, but I added support for laptops and smaller keyboards with the extra QWE ASD `ZX keys.

When you access build-mode (blue spanner) you should get a message at the bottom of the screen which tells you to use the NUMPAD or the keys above to build track. Here's what that should look like...

BUT, once you've built some track this message will no longer display anymore. I figured once the user has built track, they no longer need to see this message and so I disabled it to stop it causing an annoyance. The same goes for Stations, Depot's and Signals. These all have a useful message tip that will appear at the bottom of the screen as you toggle each of the build modes.

For Station building, place the white-square-box alongside the section of track you wish to build a platform at, and then use the numpad direction which points towards that section of track. You can do this BOTH alongside track, and also at the END of track (as a terminal .etc). Platforms built alongside tracks act as a passthrough so you can continue building track onwards, and terminals built at the end of the track are obviously terminating.

Stations must be built within existing town boundaries (as indicated by the white dashed border surrounding the town). The image below shows current town borders (these expand as the town grows providing more opportunity to build within larger boundaries)

-quick tip- you can actually build your station in any of the 8 tile squares directly surrounding the town border also. The same rules apply to Depots! 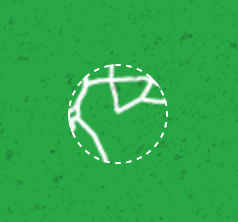 As for not being able to log back in, I'm not sure what's causing this issue but I have seen it happen myself. It seems to be caused by the browser cache. If you clear your browser cache you should be able to log on as normal. Not sure why this happens, but it's on my list of things to fix for sure.

With regards to the use of "Railway Tycoon", I did indeed search the IPO office for the mark and it appears to be an unregistered mark, so my assumption on this is that there shouldn't be any cause for concern using "Railway Tycoon" though since this is not a commerical venture by any stretch if that were ever to become a problem I'd have no issues changing it whatsoever.

As for why this project is web-based? Well, as I explained above, I don't have the programming skills to develop the game in C++/C#. But, I can make it happen in javascript, hence why it's web based. Also, you're right about the privacy statement and I will add one with the next update.

I will have to earmark some time to do some short length tutorial video's explaining how the game/controls/building .etc works. Hopefully this will help new players better understand how it all works.

In any case I will endevour to continue working on it. Thanks for the feedback.

railwaytycoon wrote: ↑09 Sep 2021 21:04 With regards to the use of "Railway Tycoon", I did indeed search the IPO office for the mark and it appears to be an unregistered mark, so my assumption on this is that there shouldn't be any cause for concern using "Railway Tycoon" though since this is not a commerical venture by any stretch if that were ever to become a problem I'd have no issues changing it whatsoever.


As for why this project is web-based? Well, as I explained above, I don't have the programming skills to develop the game in C++/C#. But, I can make it happen in javascript, hence why it's web based. Also, you're right about the privacy statement and I will add one with the next update.

If JavaScript is the only programming language you know, you could still bundle your app with Electron, or make it accessible to anonymous users without registration. I generally dislike services that require me to sign up and thus fork over my personal data if that personal data is not actually necessary for providing me with whatever service it is you are providing.


I will have to earmark some time to do some short length tutorial video's explaining how the game/controls/building .etc works. Hopefully this will help new players better understand how it all works.

This will probably sound harsh but if your game needs tutorial videos to explain its basic functions, it is probably not a well-designed game.

Basic functionality like building tracks in a railway management game needs to either be so intuitive as to require no explanation, or to be explained in-game. And frankly, your current interface for building tracks, which is entirely keyboard-based as I understand it, is just not very good even with the explanation. It's not the 1990es anymore and users rightfully expect that they can use the mouse for doing things like that.
"There's something germane to a Muscle Building that exterminates an appearance for a Muscle Building."
-- a spambot on tt-forums.net

My blog, which is sometimes about railways | Bulk GPX Viewer on Github
Top
Post Reply
6 posts • Page 1 of 1