by WWTBAM
It has been about 5 years since Lakie posted his release of r1934. This version is hopefully bug free. The aim of this is to make sure there are no bugs left that weren't reported to the bug tracker before Josef posts it as a Stable on the website. Any version of ttdpbase(w).grf since the version that came with Lakie's r1934 download will work with this build. A changelog will be uploaded later today.

by WWTBAM
Can anyone who has downloaded it comment on how it reported that version information was known or not. There should be no bugs left, so I would like to be able to send Josef the exes sometime tomorrow if people have no issues.

by OzTrans
It starts fine without delays ...

I cannot really test it, as my NewGRFs are no longer compatible with v2.5 beta 9. 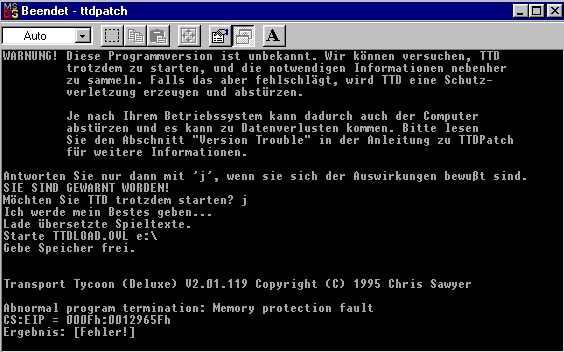 by WWTBAM
I think the exes I have may be broken in some way. Will investigate further in the next couple of days.

by WWTBAM
I have now fixed the version information for all the DOS languages and uploaded to the first post, only the DOS version is new. If no one finds any bugs in the next couple of days, I will build them again with the version string as "2.5" and send them off to Josef.
All times are UTC
Page 1 of 1
Powered by phpBB © 2000-2020 phpBB Limited