I suggest you update to 2.5b9, but of course - it's entirely up to you.
Official TT-Dave Fan Club

the official site of Configurator has been closed. Can anyone post this useful programm here? I can not find this in inet

oh yeahh... I have found it

I need the latest, can you give me a link?
Top

There was a problem with the domain holder, but it's been solved already and the site should be back tomorrow.

thanks a lot! and one question.
In WinVista the ttdxc don't show his window. Process "ttdxc.exe" is present in process list, but i can't to show it window. Same trouble with ttdxc_pro. Is it possible to resolve this trouble myself? Or it need to rebuild the code?


P.S. And the components for ttdxc

You don't need the old components package because they are included in the new setup executable.

And I have barely tested the program on Vista months ago, I didn't have such problem you mention. Try to use some sort of compatibility mode because I have no other solution for now.
OpenTTD Manager | TTDX Configurator | GRF Wizard | NFO Editor
Top

There is a processes on screenshot. But there is no window of ttdxc. But it's not important. Vista - is BIG HOLE and the worst s*** what I saw.

After finding a dozen error reports on my mailbox this week, I noticed there was something wrong with TTDXC and latest Nighlty versions. It was an overflow problem with the new range of the miscmods switch, and it's been fixed already in version 2.8.8.

Aditionally the msxml.dll was added to installer because MS does not ship it with Vista, despite that OS is a piece of junk I know it's starting to be used by lots of ppl who like the fancy colors and windows regardless of the absurd resources usage.

This is your notice that I intend to add a thirty-third miscmods bit to the nightlies in the near future. I will commit no sooner than 04:00 GMT, 25 Jun 2007 (~1 week), unless you and AndersI both inform me that an earlier commit is acceptable.

The important detail for you is that, if you're storing the miscmods setting in a 32-bit integer, this will no longer work.
To get a good answer, ask a Smart Question. Similarly, if you want a bug fixed, write a Useful Bug Report. No TTDPatch crashlog? Then follow directions.
Projects: NFORenum (download) | PlaneSet (Website) | grfcodec (download) | grfdebug.log parser
Top

Actually, false alarm. miscmods currently only has 31 bits, so I'll take the unused bit (#26) instead.

However, if you want a version that uses bit 32, let me know. I'll keep the changes on hand, but I don't see any point in committing them prematurely.
To get a good answer, ask a Smart Question. Similarly, if you want a bug fixed, write a Useful Bug Report. No TTDPatch crashlog? Then follow directions.
Projects: NFORenum (download) | PlaneSet (Website) | grfcodec (download) | grfdebug.log parser
Top

DaleStan wrote:The important detail for you is that, if you're storing the miscmods setting in a 32-bit integer, this will no longer work.

TTDPC in it's current incarnation will not work if you extend over 32-bit integers. As summer vacation is about to start, I'm certainly not certain *when* I'll get the time to do any changes to it. My suggestion would be a miscmods2 instead of extending into 32+ bit land. With a correctly updated XML file, the current TTDPC should handle that without problems.

(I see from your other post that the decision point has moved forward - didn't we have a discussion about this a while ago in another thread? What was the consensus then? (Too lazy to search right now))

My impression is that Patchman doesn't much care for <foo>2, in any of its incarnations. But, as it happened, miscmods only had 31 bits, so I just grabbed the unused one; the decision on 64-bit miscmods vs miscmods2 doesn't have to be made just yet.

What I remember from (*poke*prod*search*) the discussion is that TTDPC won't handle 64-bit values properly.
To get a good answer, ask a Smart Question. Similarly, if you want a bug fixed, write a Useful Bug Report. No TTDPatch crashlog? Then follow directions.
Projects: NFORenum (download) | PlaneSet (Website) | grfcodec (download) | grfdebug.log parser
Top

I'm pretty sure you're missing about four digits in that number. Did you mean 9.223.372.036.854.775.807, maybe?
To get a good answer, ask a Smart Question. Similarly, if you want a bug fixed, write a Useful Bug Report. No TTDPatch crashlog? Then follow directions.
Projects: NFORenum (download) | PlaneSet (Website) | grfcodec (download) | grfdebug.log parser
Top

Why don't you guys write 2^31 / 2^63 instead? And why don't you use the negative numbers to double the range to 2^32 and 2^64, respectively?
One after one, by the star-dogged Moon,
Too quick for groan or sigh,
Each turned his face with a ghastly pang,
And cursed me with his eye.

-- Samuel T. Coleridge, The Rime of the Ancient Mariner
Top

(Although I guess that depends on the programming language you are using?)

I'm refloating this topic just to inform that [after some years of being busy with other stuff] a new TTDX Configurator version is out, with many bug fixes that unfortunately could not be implemented earlier. 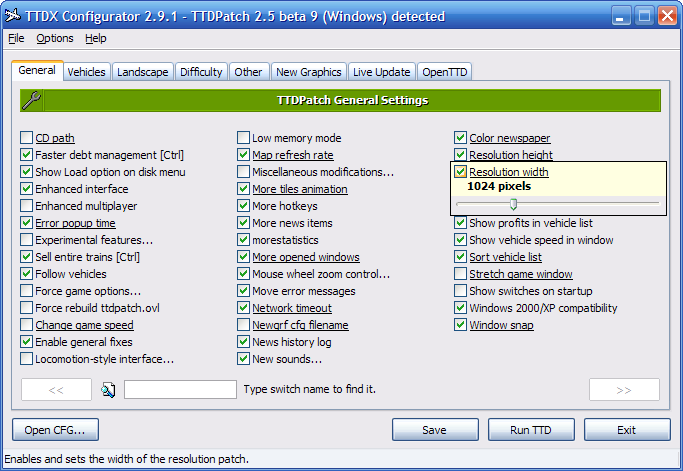 This is probably one of the final versions, since the TTDPatch development apparently has come to an end, but there are still many users playing it, as I see in the TTDXC updates log panel.